Inside Clean Energy: A Case For Optimism

NOTE: We publish this article because it shows the movement to end fossil fuels is having an impact on energy corporations – at least on their rhetoric. Whether they change their practices in a positive way remains to be seen. Corporate executives, and politicians for that matter, are skilled at sounding like they are “on our side” when they are actually promoting policies that are harmful to support their continued profiteering. This is the difference between official versus operative policies as we discuss in the first class of the Popular Resistance School. An official policy sounds like it is in line with our values but the operative policy, what the company actually does, violates our values. That said, changing their rhetoric is a first step. We must continue organizing and mobilizing to demand they change what they do and building our own structures that reflect our values.

It is also noticeable that this article omits important values of racial equity and protection of workers and the environment in the transition to a clean energy economy. This transition must be performed in a way that compensates and empowers those who are most directly impacted by the current system. An energy transition that maintains economic inequality, racism, exploitation, and environmental degradation so the corporations can protect their profits will perpetuate the serious problems we face today.  – MF

You might say I’m the climate change therapist in my neighborhood. When people find out that I write about climate change and clean energy, they often react with some version of a despair story.

And that’s when I launch into my case for optimism. It goes like this:

I spend just about every day talking to the researchers, entrepreneurs and advocates behind the transition to clean energy. Their enthusiasm, plus the evidence of their progress, makes me feel like I’m covering the story of our lifetimes.

Don’t get me wrong. I’m not hand-waving and talking about how markets and innovation will solve everything, although both of these things are crucial. And I’m not minimizing the reality that the U.S. and most countries are way behind in cutting emissions enough to stave off the worst effects of climate change, or the fact that there are many bad actors. The negative indicators, from melting arctic ice to the wide-ranging effects of extreme heat, are often terrifying.

But I’m optimistic, largely because of the big changes happening in the ways we produce and consume energy.

Wind and solar are now the least expensive electricity sources in much of the world, and battery storage — with applications for the electric grid and for electric vehicles — is also becoming affordable. For example, silicon solar panels cost an average of 23 cents per watt last year, down from about $80 per watt in 1976, according to BloombergNEF.

Another big part of the equation is that we have gotten much better at conserving energy through efficient building methods and advances in appliances and lighting. Since the 2008 recession, U.S. energy consumption has been essentially flat, despite growth in the population and the economy.

This is good news for fighting climate change, because the lack of growth in electricity demand helps to hold down electricity prices, which in turn puts pressure on old power plants to close.

Considering all these indicators, a transition to clean energy is “extremely plausible,” said Joshua Rhodes, an energy analyst for Vibrant Clean Energy, a Colorado consulting firm. “I’m optimistic that we will rise to the challenge, eventually.”

The “eventually” is important, because it’s his way acknowledging that the U.S. is not acting as quickly as it could or should, and that federal policy is often impeding progress.

“It’s important that we view this as something we can do,” he said. “If we take a defeatist mentality, then how do you motivate anyone to do anything?”

Rhodes wants people to come to terms with the challenges and opportunities of the transition to clean energy, a recurring theme when I talk to the professionals who deal with these issues.

“I don’t know that I would label myself as a natural optimist,” said Ashlynn Stillwell, an engineering professor at the University of Illinois at Urbana-Champaign. “I’m a mom, so I worry. That’s what we do.”

Her research focuses on how climate change affects water resources. I asked her how she maintains her sunny outlook.

“I’m in a classroom full of Generation Z students who are the future engineers who are going to tackle these challenges,” she said. “This generation gives me a lot of hope because they don’t just take things as they are. They’re out there learning about different engineering systems and learning about solutions to big, gnarly problems and how they can make a difference.”

For many people who want to work in fields related to climate change and clean energy, the question is not whether they are optimistic or pessimistic, but whether they can make a difference.

Gabriel Chan, of the University of Minnesota, does research that focuses on the intersection of earth science and public policy. This is how he explains his attitude and that of many of his students:

“I feel like I have agency, and I guess that’s the thing a lot of people struggle with, is the feeling that they don’t have agency in the climate problem because it’s so big and the news is so bad on the impacts side that it feels hopeless.”

Chan often works to bring together academics and the companies that are implementing the transition to clean energy. He thinks the two sides can teach each other about the opportunities and how to overcome practical obstacles. A great example is right in his city: Xcel Energy was the first large U.S. utility to commit to getting to net-zero emissions.

“It definitely won’t be me alone, but if I build the right kinds of partnerships and community around this, then we can do this together,” he said.

BP and Dominion Join the Club of Companies with ‘Net Zero’ Goals. Here’s Why.

Investors are ramping up the pressure on energy companies to have a plan for navigating the energy transition, a shift underscored by CNBC’s Jim Cramer last week when he said, “I’m done with fossil fuels.”

At the same time, investors are likely to reward energy companies that come up with thoughtful plans for how they will be able to transform themselves to prosper in a world where carbon emissions need to get to near zero.

This is some of the context that helps explain BP’s announcement on Wednesday of “a new ambition to get to net zero” carbon dioxide emissions by 2050. The company, one of the largest oil and gas producers in the world, says it is ready to transform itself by investing in clean energy and dramatically reducing the carbon emissions of its core businesses.

The company also said it would advocate for policies that would lead to net-zero emissions for the world, and would be willing to support a tax on carbon.

“The world’s carbon budget is finite and running out fast; we need a rapid transition to net zero,” said Bernard Looney, BP’s CEO, in a statement. “We all want energy that is reliable and affordable, but that is no longer enough. It must also be cleaner.”

Analysts will need some time to digest this announcement and get an idea of what it means for BP and how it compares to other fossil fuel companies’ talk of cutting emissions, such as Shell saying it wants to cut emissions by 50 percent by 2050. BP says it will provide more details in September.

My first impression is that the word “ambition” stands out, making clear that this is an aspiration rather than a firm plan. If the company’s ambition turns into a firm plan, then this could be one of the most consequential changes in corporate climate policy we’ve ever seen.

Also this week, Dominion Energy, the Virginia-based electricity and natural gas utility, announced a plan to get to net-zero emissions across its operations.

While it is a fraction of the size of BP, Dominion is a giant in the world of U.S. utilities, serving 7 million customers, most of them in Virginia and South Carolina.

The company joins Xcel Energy, Duke Energy and DTE, among other large U.S. utilities, in pledging to reach net-zero for electricity generation by 2050. Net-zero usually means that emissions would be offset by removing greenhouse gases. 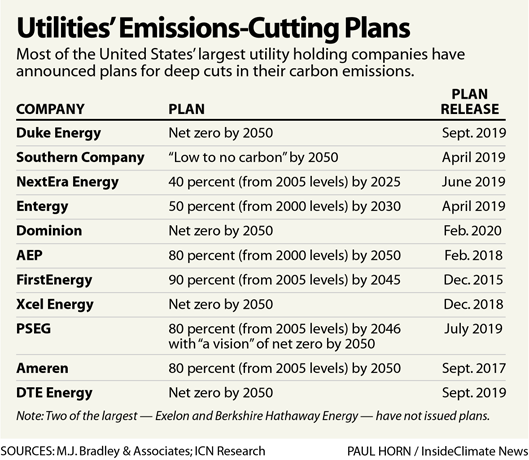 Will Cleveland, an attorney for the Southern Environmental Law Center, says he is pleased to see Dominion making this commitment, but has many reasons to be skeptical that the utility will deliver on its promises.

He notes that this is the same company that’s behind the Atlantic Coast Pipeline, a project that would ship gas from shale formations in West Virginia to markets in Virginia and North Carolina. He sees that project, opposed by many environmental groups, as incompatible with the idea of reducing emissions to net-zero.

It probably isn’t a coincidence that Dominion is releasing its plan the same week the Virginia House and Senate each passed versions of bills that would require utilities to move to 100 percent carbon-free electricity by 2050. Democrats control the Virginia governor’s office and the legislature and have said they intend to pass clean energy legislation.

Cleveland thinks Dominion executives “see the writing on the wall on climate issues.” The same could be said about BP.

The Trump administration this week proposed a 74 percent budget cut to the Department of Energy’s Office of Energy Efficiency and Renewable Energy. It’s a familiar pattern in which the Administration proposes a big cut to the office that is then followed, at least in previous years, by Congress passing a budget with little or no cutback.

The office, usually known by the initials EERE, is vital for funding clean energy research at national laboratories and in the private sector. A cut on the scale the administration has proposed would be devastating, as I wrote last year when we last went through this routine.

While this budget dance takes place, there is evidence that the administration is letting EERE wither away, by not spending money that already has been budgeted. 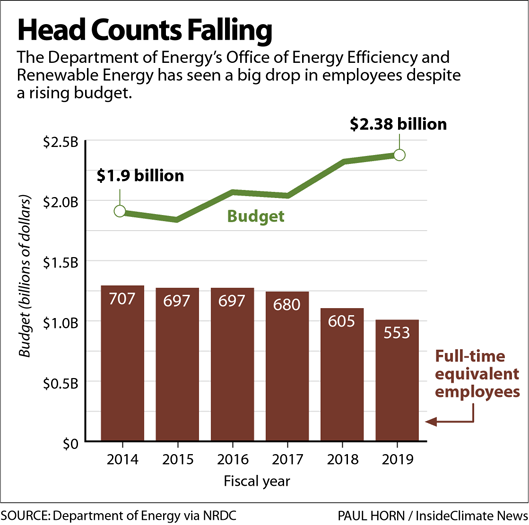 A House sub-committee held a hearing about the situation last week, with testimony from Daniel Simmons, who is in charge of EERE, and from three people who testified that the office is being mismanaged.

The Natural Resources Defense Council put together a chart showing how the office’s budget has increased every year since 2014, but its staffing has decreased. The head count was 707 in 2014, and by 2019 had dropped to 553, according to the office’s most recent tally.

The result is that people are overworked and often doing multiple jobs, said Anthony Reardon, president of the National Treasury Employees Union, which represents many of the workers. He was one of several people at the hearing who criticized a slow hiring process, in which political appointees must approve just about every new hire, which he said is a change from the previous administration.

Simmons said he is well aware that the office is understaffed and said the agency is working on a plan to get the head count up to 625, adding that EERE “cares deeply about its staff.”

The Democrats who run the committee said they intend to hold EERE accountable to bring hiring in line with the approved budget. I’ll be watching to see if that happens.