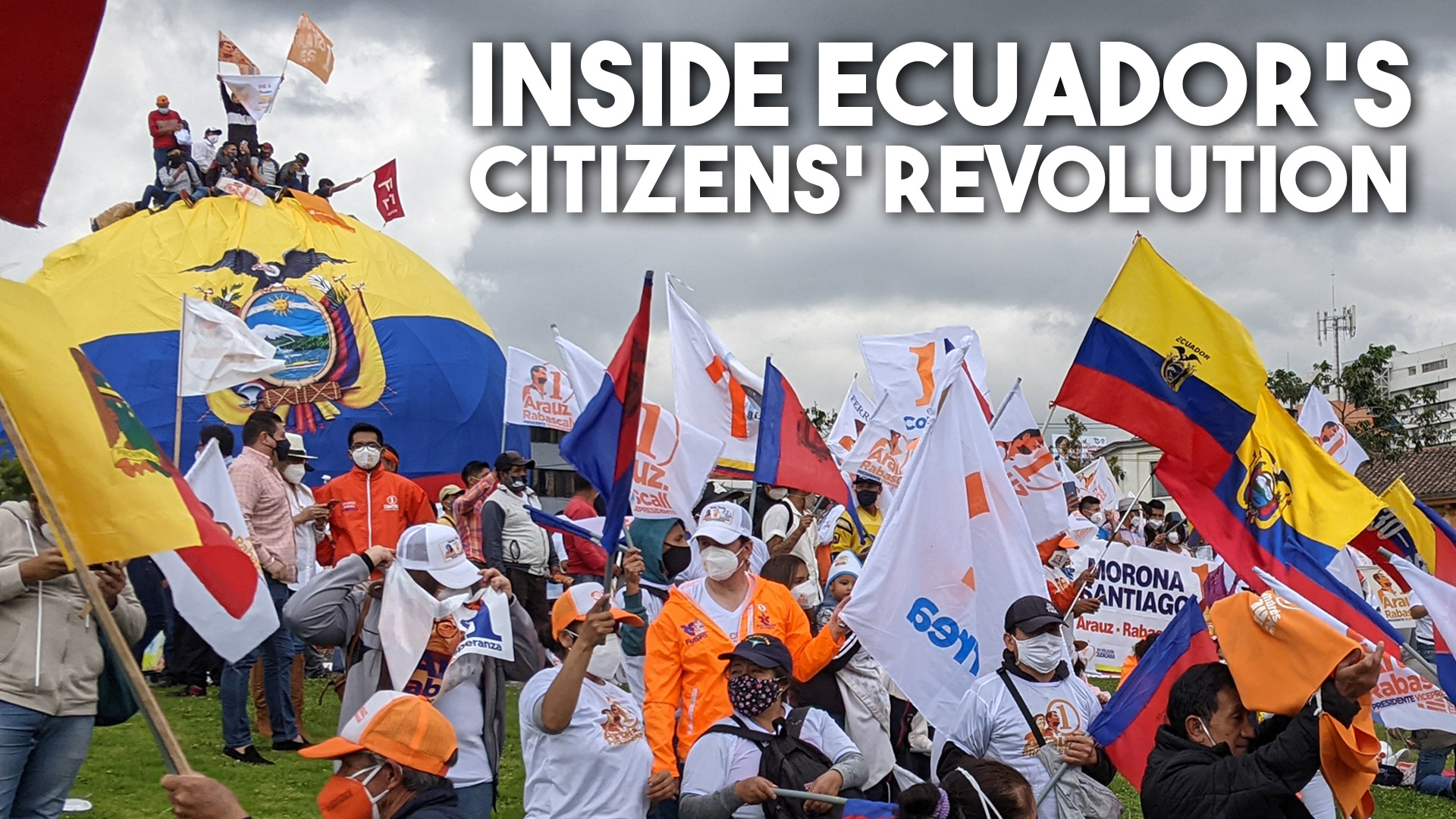 Ben Norton traveled to Ecuador to report on the historic February 7 election, which pits a wealthy US-backed right-wing banker against a left-wing economist who pledges to continue the socialist Citizens’ Revolution launched by former President Rafael Correa.

In this dispatch, working-class Ecuadorians explain why they support leftist candidate Andrés Arauz and oppose the repressive Washington-allied government of Lenín Moreno.

Quito, Ecuador – The South American nation of Ecuador is currently suffering through its worst economic crisis in decades. Poverty is skyrocketing, corruption is rampant, and the US-backed government has shown itself to be deeply undemocratic.

On February 7, Ecuador will hold a historic election that could fundamentally change its direction, moving the nation away from its current neoliberal policies and reliance on Washington, and restoring the socialist-oriented program of former President Rafael Correa, who launched a progressive movement called the Citizens’ Revolution.

And in a historic act of betrayal, Moreno renounced the asylum that Correa had given to WikiLeaks publisher Julian Assange, allowing British authorities to enter Ecuador’s sovereign embassy in London and arrest the Australian journalist.

Under Moreno’s reign, unemployment, inequality, and hardship have reached peak levels, with more than 58 percent of Ecuadorians living in poverty and nearly 39 percent in extreme poverty, according to a United Nations University study.

Meanwhile Ecuadorians have endured a catastrophic response to the Covid-19 pandemic, with one of the highest per capita death rates in the entire world.

In 2020, Ecuador’s GDP shrunk by an estimated 11 percent. Everywhere you walk in the capital city Quito, you see “for sale” and “for rent” signs.

Ecuador’s February 7 election has boiled down to two main choices, and the difference could not be any starker: On one side is the right-wing candidate Guillermo Lasso, a banker who served as economic minister when Ecuador suffered through a financial meltdown in 1999 that bankrupted millions of citizens and destroyed their life savings.

Lasso, who has long been credibly accused of corruption and the use of off-shore tax shelters, has the staunch support of Ecuador’s wealthy economic elites and the United States.

On the other side is left-wing candidate Andres Arauz, a young economist who follows in the footsteps of former President Correa and his movement, known as Correismo, and wants to bring back his socialist policies.

Arauz has built a huge grassroots following in a presidential campaign based on his promises to tax the rich, to give $1000 checks to a million poor and working-class families, and to abandon suffocating and extremely unpopular economic agreements that Ecuador’s current Moreno government signed with the International Monetary Fund, or IMF.

Arauz also plans to revive regional institutions to integrate Ecuador’s economy with other Latin American countries, and he wants to return to closer business ties with China, just as his mentor Correa had done.

Virtually all polls show Arauz leading and likely to win the presidential election, if the vote is free and fair.

The fact that the leading presidential candidate wants to reject the IMF and seek deeper economic relations with Beijing has angered Washington, which has meddled in Ecuador’s internal affairs and thrown its weight behind the banker Lasso.

Under the US-backed Lenín Moreno administration, Ecuador has attacked regional institutions, withdrawing from the Bolivarian Alliance, or ALBA, a trade bloc of left-wing Latin American countries, and taking Ecuador out of the Union of South American Nations, or UNASUR, kicking out the international body’s Quito-based headquarters.

While overseeing widespread corruption and looting of public money, the Moreno government also ensnared Ecuador with billions of dollars in loans from the IMF.

As part of an austerity package demanded by the IMF, Moreno announced in 2019 a series of aggressive neoliberal reforms, which included cutting 23,000 state sector jobs and ending longtime fuel subsidies, which nearly doubled the price of gasoline.

The proposed austerity package kicked off a massive uprising in October 2019. Labor unions organized strikes, while Indigenous groups and students held massive protests that brought the country to a halt.

The Correista movement decided to close its electoral campaign this February 4 at a park in the heart of the capital Quito, known as the parque del arbolito. This location was deeply symbolic, because it was here that the uprising against Moreno’s neoliberal reforms started in October 2019.

Correismo and the Citizens’ Revolution

Rafael Correa remains the most popular politician in Ecuador. In his 10 years as president, from 2007 to 2017, Ecuador’s poverty rate plummeted, the minimum wage increased rapidly, and the government invested billions of dollars in universal healthcare, education, and advanced infrastructure.

While Ecuador is still a developing, formerly colonized nation, it has significant natural resources that could make the country rich. These include substantial oil and mineral reserves, such as gold, silver, and copper.

For decades, these resources were monopolized by a small handful of Ecuadorian oligarchs. Correa was the first leader to use the country’s plentiful natural resources to instead fund popular social programs.

Correa also pursued an independent foreign policy, strengthening relations with China and Russia, collaborating closely with other socialist governments in Latin America, and committing Ecuador to political and economic integration with its neighbors.

Correa spoke with The Grayzone editor-in-chief Max Blumenthal in December about the stakes of the election:

In Ecuador the rule of law has been permanently broken. They seized the state with a completely fraudulent, manipulated consultation in the absence of constitutional control. Using the same methods, they took control of the council that appoints all the supervisory authorities…

The government of Ecuador is totally submitted to the interests of the government in the United States, above all to try to persecute progressive leaders and try to threaten the stability of Venezuela. That is evident…

So they are really desperate. They are capable of anything, because for them the worst thing that can happen is that we win. Because they know that they will have to face justice.We are not vengeful people, but justice must be done. Without hatred, but with memory…

I ask the world to be very attentive to what is happening in Ecuador in these elections.

Under Correa’s leadership, Ecuador launched the progressive Citizens’ Revolution, which fundamentally transformed the country and is still a powerful force today. At the rallies in the country’s two biggest cities, Quito and Guayaquil, working-class Ecuadorians showed their undying support for this revolution.

From Correa’s vice president to his anti-democratic persecutor

Lenín Moreno once served as Rafael Correa’s vice president. He won the 2017 presidential election precisely by claiming to follow in the footsteps of Correa and feigning fidelity to the Citizens’ Revolution, but quickly did a political 180, betraying Correismo and turning hard to the right.

The publication of leaked documents known as the INA papers offered insight into the Moreno government’s extreme corruption, showing how the leader has used off-shore bank accounts in Panama to siphon millions of dollars out of public coffers.

While overseeing this looting of the state, the Moreno administration ironically accused Correa of corruption, slapping the leftist leader with dozens of politically motivated, unsubstantiated charges.

Moreno even imprisoned Correa’s other former vice president, Jorge Glas, on spurious accusations. Glas has remained incarcerated in Ecuador’s notorious Latacunga prison, even after a 52-day hunger strike that landed him in the hospital, nearly killing him.

Throughout the 2021 electoral process, the Moreno government has placed obstacle after obstacle to try to prevent the leftist Correistas from returning to power.

The Moreno administration blocked Correa from running a vice presidential candidate. It also banned Andrés Arauz’s political party from participating, forcing the Correista movement to instead register with a little-known party.

The National Electoral Council (CNE), which was politicized by the Moreno government and is controlled by the country’s right-wing, even declared that left-wing candidates were not allowed to use images of Correa in their ads and political campaign materials.

At the same time, Ecuadorians living abroad, who are overwhelmingly supporters of Correismo, have faced obstacles in the election as well. The CNE has made it difficult for expats to vote.

Mere days before the vote, the CNE similarly sought to revoke the electoral observer credentials for a Spanish member of European Parliament and a Spanish political scientist, because of their left-wing political ties.

These unsubstantiated stories were near carbon copies of a propaganda drive from several years before that was weaponized against Correa, falsely accusing him of taking money from Colombia’s socialist guerrilla group FARC.

While his government was busy clamping down on the left in Ecuador, Lenín Moreno himself was in the United States. Just two weeks before the election, he visited DC for several days.

Moreno had a series of meetings with powerful figures, including the following:

During his junket, the Ecuadorian presidential office produced several slick videos lavishing praise on the United States and showing Moreno smiling with his political and economic sponsors in Washington.

Observers have warned that Moreno’s meetings may have been aimed at rigging the election, or at least making more anti-democratic obstacles to prevent a Correista victory.

Nearly all polls show leftist candidate Andrés Arauz easily winning Ecuador’s February 7 election. Yet the Ecuadorian media’s reliance on a corrupt firm funded by right-wing candidate Guillermo Lasso to produce exit polls after the vote is one of many signs of potential irregularities.

The Ecuadorian people however seem ready to fight. The massive turnouts for the Correista movement’s demonstrations in the major cities, with tens of thousands of working-class flooding the streets and parks, reflects a popular outrage in the country, and a widespread yearning to return to the Citizens’ Revolution.