Inside The Failed Plot To Overthrow Venezuelan President Nicolás Maduro

While the editorial comments by Bloomberg Businessweek about Venezuela are wrong, repeating western propaganda and they fail to mention the economic war that is causing many of Venezuela’s economic problems, the more important story is the failed military coup. Former Secretary of State Tillerson and Senator Marco Rubio were calling for a military coup, not coincidentally this report claims the US was aware of the plans, along with Colombia and some of the plans were made in Colombia. The US denies reports that it was financially backing the coup. But, the coup was thwarted, the election went on and Maduro won a landslide victory.

A second coup which would have assassinated Maduro at a military parade in July 2017 has also been exposed. KZ

The plot, code-named Operation Constitution, involved scores of captains, colonels, and generals from all four branches of Venezuela’s armed forces. The goal was straightforward and seismic—to capture President Nicolás Maduro and put him on trial. The plotters, wearing blue armbands marked OC, were supposed to storm the presidential palace and main military base and stop the May 20 presidential election. Some of the planning took place in Bogotá, but Colombian and U.S. officials, who allegedly knew about the plot and winked from the sidelines, declined to provide active support.

Then something went wrong. In mid-May, several dozen servicemen, including one woman, as well as a couple of civilians, were secretly arrested—some have been accused of treason—and imprisoned by a military court. Many say they’ve been tortured. The plotters believe they were betrayed, possibly by a double agent. This reconstruction of the conspiracy is based on interviews with one plot coordinator who escaped arrest, two who attended planning sessions, and lawyers and relatives of the accused. All spoke on condition of anonymity, fearing for their safety. Bloomberg also viewed a military court report laying out the government’s version of events; it corroborated many of the plotters’ accounts.

Details of the failed coup, probably the biggest threat to Maduro in his five years in office, haven’t been reported before, though a military blogger in the country has alluded to it. Once rich and relatively democratic, socialist Venezuela has devolved into a dysfunctional, authoritarian petrostate. The country is beset by hyperinflation and severe food and medicine shortages. Hundreds of thousands have fled to neighboring Colombia, which for decades battled Marxist guerrillas backed by Maduro and his predecessor, Hugo Chávez, who himself led a failed coup against the Venezuelan government in 1992. A decade later, as president, he beat back a coup. 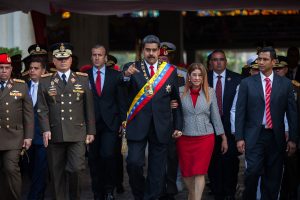 Maduro walks with Cilia Flores, first lady of Venezuela, during a “Vow of Loyalty” event at the Ministry of Defense in Caracas on May 24, 2018.PHOTOGRAPHER: WIL RIERA/BLOOMBERG

Some members of the Venezuelan military say the only hope for a return to stability is to replace Maduro by force. That remains unlikely after the coup’s failure. The president holds sway over all major institutions; he’s never been a military man but has worked hard to win the loyalty of top brass. And while his reelection in May was widely condemned as fraudulent, it reaffirmed the sense that he’s firmly in power. The coup attempt, however, indicates that parts of the security services are roiling with discontent—and Maduro has taken note. At a military parade on June 23 he declared, “It’s time to close ranks and dig in against treason! We need a united military loyal to the glorious country of Venezuela and its legitimate commander-in-chief!”

The military tribunal report on the plot, participants say, contains both fact and fiction. Its key assertion is undisputed: In May high-ranking officers from all four branches of the security services attempted an insurrection. But those interviewed reject the most dramatic claims, including that the U.S. and Colombian governments provided financial backing and that there was a separate plot, Operation Armageddon, which called for Maduro’s assassination at a military parade in July 2017.

The U.S. has “no intent to destabilize or overthrow the Venezuelan government,” says a State Department spokesperson, but wants “a return to a stable, prosperous, and democratic Venezuela.” Speaking in Texas in February, as coup preparations were coming to a head, then U.S. Secretary of State Rex Tillerson noted that militaries in Latin America frequently step in during crises. “If the kitchen gets a little too hot for [Maduro], I am sure that he’s got some friends over in Cuba that could give him a nice hacienda on the beach,” he said. Both Colombia and Venezuela declined to comment.

The military prosecutor asserts that María Corina Machado, a top opponent of Maduro’s, took part in the plot. She and the participants say this is fiction aimed at besmirching and possibly jailing her. “This regime is once again trying to incriminate me,” Machado says in an interview in Caracas. “I have no connection to these plots. They want to silence my voice, because I have labeled them a narco-dictatorship. I want to be clear: I want Nicolás Maduro out of power immediately. But I want him out alive so he can face the justice that his regime has denied to Venezuelans.” Both the government and the plotters have reason to exaggerate as well as to downplay what happened: The plotters want foreign support and more officers to join the next effort and hope to protect those who’ve been caught. The government seeks to justify a purge, which has begun, while claiming to be in full control.

Participants say the coup was first planned for April 2017 to stop Maduro from expanding his powers over Venezuela’s legislature. But an unrelated and much smaller military rebellion caused the participants to pull the plug. Planning continued into 2018, with secret meetings being held in homes in an upscale part of Caracas. At one point, a participant snuck across the border from Colombia wearing a fake mustache and using a false ID.

Elements of discontent among the security forces began to appear a year ago when Oscar Pérez, a police officer and pilot, commandeered a helicopter and lobbed grenades at government ministries. Maduro blamed the attack on Major General Miguel Rodríguez Torres, a former intelligence chief who broke with the government in 2015. Pérez was later killed in a raid. By January, arrests of special forces lieutenants began. In March, Rodríguez Torres and some armored battalion commanders were arrested for attempted insurrection. He remains in prison.

The biggest set of arrests took place around the time of Maduro’s reelection. Participants and their lawyers say the authorities picked up a Colombian civilian, the physician boyfriend of the only woman who participated in the coup attempt. They say he’s been tortured, though he knew nothing of the plot.

Maduro has carefully cultivated his relationship with the military. Last year, when more than a million people joined antigovernment protests, he relied on his security forces to quash the unrest. Since Chávez’s death in 2013, Maduro has handed over large parts of the economy to the military, including top jobs at the state oil producer and control over food distribution. He’s promoted hundreds of generals and admirals, and active and retired military officials hold nine of 34 cabinet posts.

Nonetheless, a person with knowledge of the military says polls run by the intelligence service found Machado has especially high approval ratings among officers. That may explain why the government has tried to link her to the plot. Rocío San Miguel, president of watchdog group Control Ciudadano, says Maduro also maintains control through fear, regularly detaining or purging other officers and soldiers.

“I don’t believe this idea that Maduro is holding on by a thread,” San Miguel says. “Maduro has developed a state policy of persecution and monitoring within the armed forces. He’s paranoid. The government is creating a firewall.”