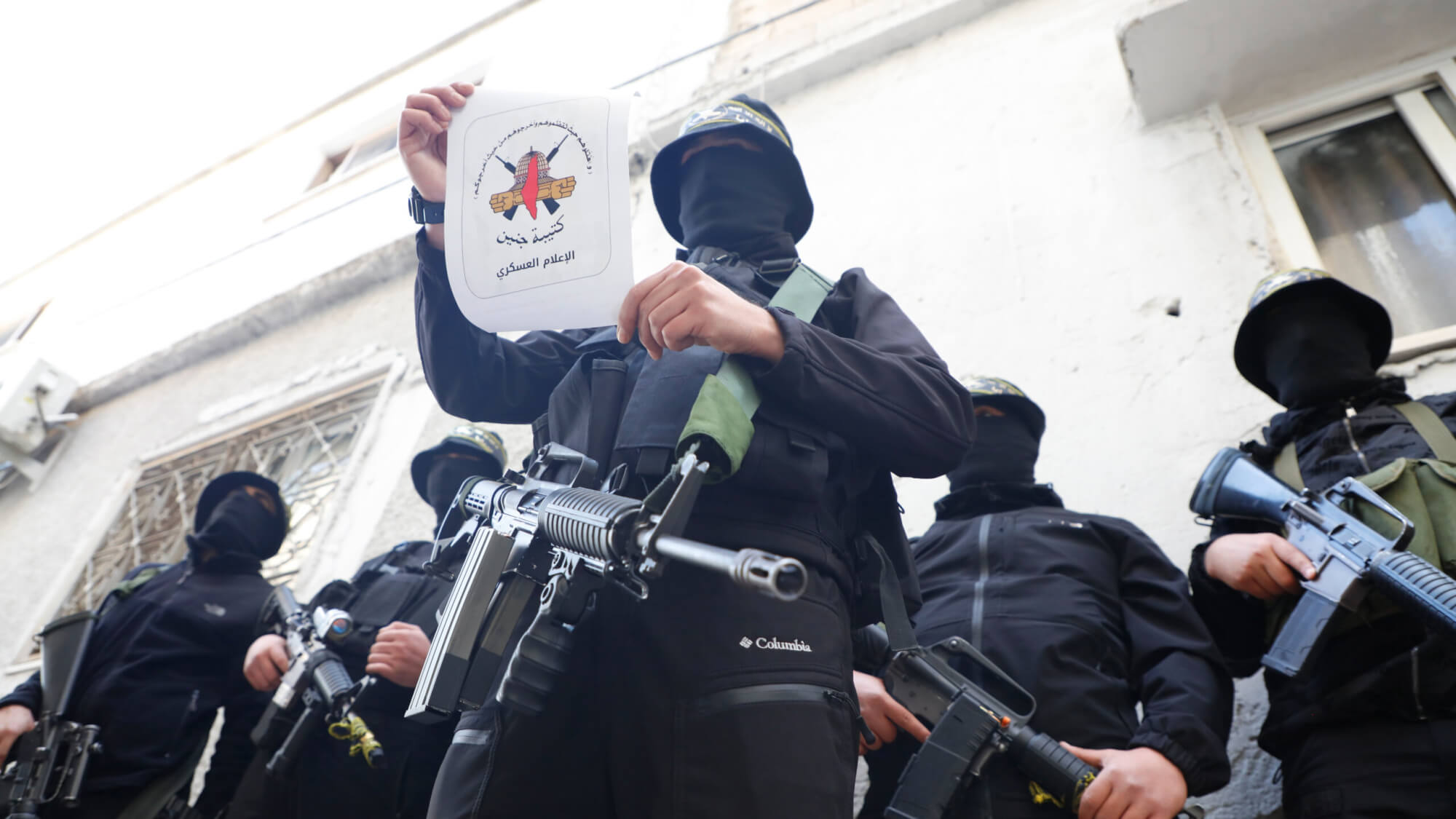 Inside The ‘Wasps’ Nest’: The Rise Of The Jenin Brigade

Jenin refugee camp has been turned into a “liberated area” by armed resistance factions.

Now the resistance hopes the Jenin model will spread to other parts of the West Bank.

“Look, we are defending ourselves,” he says, in a voice both clear and firm, apparently anticipating the question. “I first became wanted [by Israel] two years ago,” he tells Mondoweiss.

Established in 1953, the 0.42 square kilometers comprising the camp is home to almost 12,000 Palestinians, many of whom are originally from areas near Haifa and Nazareth, north of historic Palestine.

Jenin refugee camp is widely known among the Israeli security apparatus as “the wasp’s nest,” a term that with the start of the year has been re-popularized, especially during the first months of the ongoing Israeli military onslaught on bastions of Palestinian resistance.

It is almost 3:00 a.m., and the watchmen of the camp are patrolling the streets nearby, ready to protect the camp from Israeli invasions. Despite the late hour, the men are alert to any unfamiliar face, fearing they may potentially be undercover Israeli special forces on an assassination mission. This year, more than 16 resistance fighters have been targeted and assassinated in Jenin alone, the result of a return to the decades-old Israeli policy of “liquidation”.

Cooperation Of The Armed Factions In Jenin

“This is the first time I have seen such targeted attacks,” Yara Eid, a student and activist that reported from Gaza during Operation Breaking Dawn, told Mondoweiss back in August. She was referring to the Israeli strikes against leaders of the Palestinian Islamic Jihad (PIJ) in Gaza. The Israeli onslaught on Gaza, which took the lives of 51 Palestinians, 17 of whom were children, was motivated by the PIJ’s role in funding armed groups in the West Bank.

One of the main groups that was founded by the PIJ was the Jenin Brigade, Katibet Jenin in Arabic. Although the Brigade initially functioned as a Jenin branch of Saraya al-Quds (the Al-Quds Brigades, the PIJ’s armed wing), the Jenin Brigade has now evolved into a more complex and politically unaffiliated formation. It operates as an umbrella organization for a diverse set of armed groups, and the political and factional ideologies of the various fighters in the Brigade have taken a backseat to the immediate objective of protecting the camp and repelling Israeli incursions.

“Each faction operates on its own,” 43-year-old Abu Mujahed, the camp’s spokesperson for the Al-Aqsa Martyrs Brigade (Fatah’s armed wing) told Mondoweiss from a home that had harbored the two Palestinian escapees from the Gilboa Prison break, Munadel Nufeiat and Ayham Kamamji. “But when the army invades, we are all on the ground,” he said.

By “we,” Abu Mujahed refers to all of the armed political organizations, regardless of political faction. Since Saraya al-Quds and the Al-Aqsa Martyrs Brigade operate in tandem, Israel is no longer interested in targeting, or isolating, one faction at the expense of another.  The effect this has had for Palestinians is to erode, if not dissolve, factional rivalries. This has not, however, meant the dissolution of factional affiliation.

For fighters, being part of a faction is not necessarily about ideological agreement or a political line, but rather becomes a means of operating within the safety of membership. “I get my legitimacy, my cover…from the Al-Aqsa Martyrs Brigade,” Abu Mujahed says.

“We have directly informed the leadership that we will not forgo the rifle,” Abu Mujahed continued. Glancing occasionally at his phone for word of an Israeli invasion of the camp, he turns back to me and says defiantly: “we are with armed resistance.”

As resistance fighters refuse to operate clandestinely or underground, they allow for a transparency that carves a space for political diversity and battle-unity. This continues to allow resistance groups to flaunt their presence in the streets — to their fellow Palestinians, but also to the globe — as a legitimate armed group resisting an illegal Israeli occupation.

With dawn prayers just two hours away, the streets of Jenin refugee camp are still. The shadows of the camp loom over the heads of the scouts moving within the camp. Everyone else is in their homes, knowing that an Israeli military raid is more than likely to occur.

In June, the Israeli military’s social media account described Jenin as “a stronghold for the world’s deadliest terrorist groups.” This language is reminiscent of the precursors to the 2002 invasion of the West Bank, when Israel launched Operation Defensive Shield against Palestinian towns, villages, and cities. Jenin and Nablus, located in the northern West Bank, bore the brunt of the attack.

The primary objective of the operation was to “strike Palestinian terrorist infrastructures and put an end to the wave of terrorist attacks against Israeli citizens,” according to the official Israeli army website. Yet, almost two decades after the brutal invasion — which caused more harm to non-combatants and civilians, especially children — resistance continues to rise out of Jenin and elsewhere.

Like the Lions’ Den operating out of the Old City in Nablus, Jenin refugee camp has become a neighborhood of wanted men left to fend for themselves and to protect their townspeople amid attacks by the Israeli military and special forces.

Abu Daboor stands with his arms crossed at the entrance of the camp. The young fighter shows his pistol for a moment and tucks it away. “Look, I consider Jenin refugee camp as a liberated Palestinian area,” he says with enthusiasm.

During Israeli army operations and raids on Palestinian cities and towns, a soldier can often be heard shouting from the speakers attached to the army vehicle declaring the area as “a closed military zone.”

This illegal practice acts as a precursor to a violent crackdown on Palestinians in the area. During the years of the Second Intifada, and after it, Israeli soldiers would commonly threaten via loudspeakers that “whoever is roaming will be killed*.*”

Yet for the first time, Jenin refugee camp cannot be turned into a closed military area and invaded by Israeli forces freely and without impediment. “Jenin is a liberated area. We hope it extends to the rest of Palestine, as the small liberated areas spread,” Abu Daboor told Mondoweiss, hoping that such a strategy would gradually win **“one bit back at a time.” This is where the power of the Jenin model lies, in inspiring Palestinians, if not by success, then by lessons learned from past failures.

Amid the violent crackdown on Palestinian resistance in Nablus and Jenin, a new “disruption brigade” has taken shape in Ramallah and Al-Bireh. This comes at a time when Palestinian youth from Ramallah, Nablus, Bethlehem, and many other areas of the West Bank are finding new means of confrontation.

A Resistance Movement Emerges Under The Leadership’s Nose

Before the assassination of the three resistance fighters from Nablus on February 8, the Jenin Brigade was already triggering Israeli anxiety around the specter of Palestinian armed confrontation with the army.

“I am not going to lie to you,” Abu Mujahed said. “There is no real strategy here. We are going with the flow, to be frank,” he remarked with disarming candor. “All of this, it’s a collective popular wave.”

Palestinian resistance fighters are neither separate from the broader Palestinian community, nor isolated from their generational peers. In one hand, they carry the gun, and in the other, they pursue unity of struggle and forge bonds of comradeship.

The interactions observed between Palestinian leaders and representatives from both Hamas and the Palestinian Authority (PA) showcase a widening disconnect from the Palestinian lived reality, as well as the diplomatic frameworks under which leaders operate, in order to ensure their own factional survival, relevance, or control.

“After being released from Israeli prisons, I was targeted by the PA,” Abu Daboor recalls, noting that he had spent almost five years in Israeli prisons throughout his twenties. “I was first targeted by the PA a year and a half ago, and the PA tried to kill me twice before.” Abu Daboor’s tone turns sour, as he recounts the drive-by shooting incident that targeted him last year.

Since the marked rise of Palestinian resistance against illegal Israeli settlement expansion, the PA and Hamas leadership have released public statements of support for the resistance.

Yet both have to varying degrees stood by and allowed the targeted assassinations of resistance fighters to take place. This was the case with Hamas’ lack of intervention during the recent Gaza attack — when Israel targeted PIJ offices in Gaza and assassinated PIJ senior commander Tayseer Al-Jaabari, Israel was sure not to harm any of the Hamas offices in the building shared with the PIJ.

The PA has taken this many steps further, directly participating in quelling the resistance and doing Israel’s dirty work. This was the case with the PA’s arrest of two members of the Lions’ Den in Nablus back in September.

The Palestinian population’s aspirations to live independently, freely, and with control over their own fate, is the primary driver behind this period of armed confrontation. But while the spotlight is now on the armed groups, the Palestinian population at large has engaged in open confrontation with Israeli authorities. The impunity of settler violence and persistent settlement expansion only adds fuel to the fire, and bubbling beneath the surface is a sea of collective unrest.