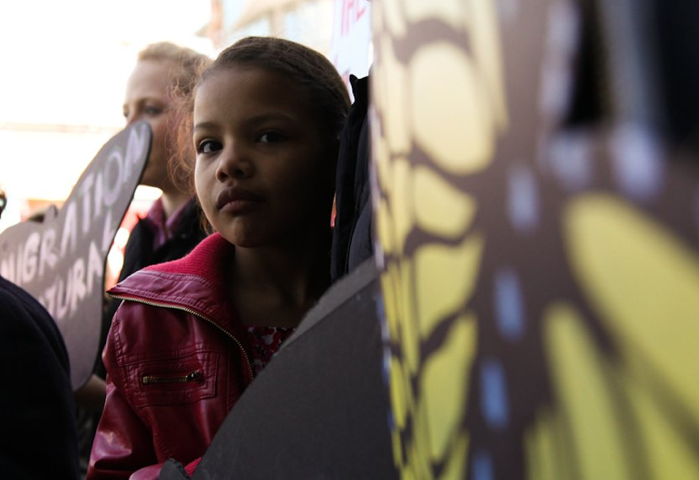 Vancouver is poised to become the newest among North America’s self-declared “sanctuary cities,” a stance intended to protect the safety of undocumented people within its borders.

What does it mean to become a sanctuary city? Who’s pushing for the change and who thinks it’s a bad idea? Where would lines shift between local and federal rules and jurisdictions? And beyond declaring Vancouver a sanctuary city, what other measures could prevent immigrants without status in our midst from suffering undue hardships?

These questions will be explored in a four part series beginning today (watch a Tyee-produced 12-minute video on the subject, below).

Spurring the sanctuary city movement in Vancouver was the arrest, and death, of Lucia Vega Jiménez.

It’s been seven months since Vega Jiménez was picked up by transit police for not paying her $2.75 fare.

Despite her fears of being deported to Mexico because of a “domestic situation,” according to the country’s Consul General here, her ejection would have likely been just another daily statistic — one of the 328 migrants Transit Police reported to Canada Border Services Agency last year.

Everything changed, however, when the 42-year-old hotel worker hung herself in an airport holding cell nearly three weeks later. She died with her sister and a local priest at her side after a week in a coma.

Her death sparked outrage, petitions, candlelight vigils, and ultimately a B.C. Coroners Service announcement of a public inquest this September into the circumstances around her death.

But the rejected refugee claimant’s case also brought into sharp relief the greatest fear faced by thousands of undocumented migrants here in B.C.: being caught, imprisoned, often separated from families, and deported if they try to access public services most of us take for granted.

“The death… in custody was just tragic and heart-breaking,” Vancouver Coun. Geoff Meggs told The Tyee. “To be snagged for a ticket and wind up spending two weeks in detention — and then she took her own life — was really hard for anybody who had any heart at all to walk past that problem.”

In May, The Tyee revealed that Meggs had quietly organized a meeting between migrant advocates, health agencies, city officials, schools and police to pitch the idea of declaring Vancouver a “sanctuary city” — one where people without legal status here could nonetheless access city services without fear of being deported. Since then, the councillor has hosted a public forum on the issue and the city’s immigration committee continues work on policy recommendations.

Toronto and Hamilton passed such policies in February this year and last year respectively, but the movement had already spread to dozens of U.S. cities, including Los Angeles in 1979 and New York City a decade later.

Sending one message or another

Some call Vega Jiménez and others like her “illegals,” “queue-jumpers,” or “irregular arrivals.” The federal government says the system has been abused for decades and needs tightening up. When Toronto declared itself a sanctuary city, one critic warned it rewarded those who flout the law.

“Giving sanctuary to illegal immigrants is an insult to everyone who is waiting to enter this country legally,” Toronto councillor Denzil Minnan-Wong told the Toronto Star. “It sends a message to the world that it is okay to break the law to come to Canada, and now you can get away with it.”

Others take issue with the very term “illegal,” arguing the reasons for lacking status are not so simple, often linked to the controversial Temporary Foreign Worker Program, increasingly strict asylum laws, or even paperwork filing errors.

“There’s a rapid change to immigration laws with this current government, in the last five to one years, that is closing borders,” explains Alejandra López Bravo, with the group Sanctuary City.

Immigration and refugee lawyer Laura Best described stories of migrants accessing emergency psychiatric care at a local hospital, only to be reported to CBSA, as well as the litany of cases she takes on ensuing from Skytrain fare-checks. Others told The Tyee abut giving birth to their children in secret, or plunging into an ice-cold water tank to escape a workplace raid.

“Those individuals are in a legal limbo when it comes to which services they can access, often through no fault of their own — or if they did leave they’d leave families and children behind in the lurch,” Best said. “It creates a climate of fear to access medical services, to access city services and police services if people don’t have status in Canada.”

This Tyee series, to be published over the next two weeks, we will look at how the sanctuary city idea has advanced across Metro Vancouver since we reported on the initial Vancouver meetings in May.

Stay tuned for dispatches on what Vancouver Police Department hopes to learn from L.A., why Burnaby is throwing cold water on the sanctuary idea, how transit authorities became a leading source of arrests, and what schools are doing to ensure parents need not fear sending their kids to school.

Running Thursday, the next feature in this Tyee series on sanctuary city will look at one everyday service that most of us take for granted: transit. Yet for immigrants here without status, the simple act of taking the bus or Skytrain to work can be one of the most feared journeys.

STATUS: Inside Vancouver’s Sanctuary Movement from The Tyee on Vimeo.