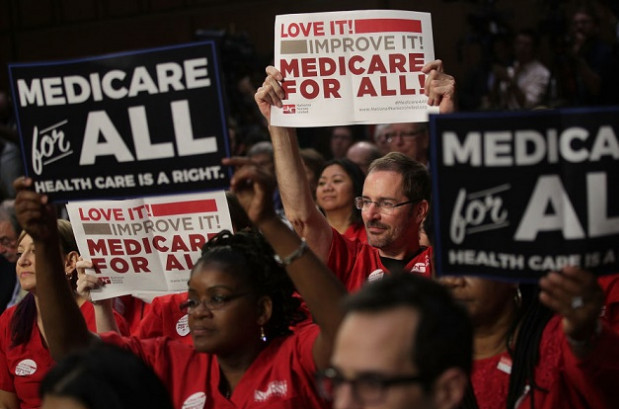 Insurance Industry Pays Senators To Not Support Improved Medicare For All

Above Photo: Supporters of the Medicare for All Act of 2017 hold signs at an event to introduce the bill in Washington, DC. Photo by Alex Wong / Getty Images.

Democratic senators who haven’t signed on to Sen. Bernie Sanders’ “Medicare for All” proposal have received twice as much cash from the insurance industry as the bill’s sponsors, MapLight has found.

The insurance industry has donated an average of $23,600 since 2010 to senators who have co-sponsored Sanders’ bill, according to a MapLight review of campaign finance data compiled by the Center for Responsive Politics. Democratic senators who have not yet supported his legislation, including Sen. Angus King, a Maine independent, have received an average of $55,500 from the industry.

The independent senator from Vermont has been pitching a government-run, single-payer health care system since 1993. But the idea became popular among progressive voters during his 2016 primary campaign against eventual Democratic nominee Hillary Clinton and is picking up support. About one-thirdof American adults polled in June said they now support a single-payer health care system.

Sanders, who formally proposed his “Medicare for All” plan on Wednesday, has picked up support from 16 of the Senate’s 46 Democrats. Supporters include potential 2020 presidential contenders, such as Elizabeth Warren, D-Mass.; Kamala Harris, D-Calif.; Cory Booker, D-N.J.; and Kirsten Gillibrand, D-N.Y. A majority of House Democrats are backing a similar proposal introduced in January by Rep. John Conyers, D-Mich.

Sanders’ bill would dramatically alter the U.S. health-care landscape. Under the current system, most people receive health insurance through their employer. About 16 percent buy insurance directly.

Health care costs are higher in the U.S. than in other industrialized nations, and health outcomes are generally worse. Proponents of single-payer believe it would lower health care costs for consumers and provide better care. It would also require new taxes, and it is likely to face stiff opposition from insurance companies.

No Republicans have voiced support for a single-payer system, and the idea has been opposed by several Democratic senators, as well. Some Democrats, like House Minority Leader Nancy Pelosi, D-Calif., have argued the party should focus on blocking Republicans from repealing the Affordable Care Act, the law known as “Obamacare” that was passed by Democrats in 2010.

Senate Minority Leader Chuck Schumer, D-N.Y., whose campaign has received $134,350 from the insurance industry since 2010, didn’t endorse Sanders’ legislation on Tuesday when asked about it.

Another potential 2020 contender, Sen. Sherrod Brown, D-Ohio, said Monday he will not co-sponsor Sanders’ bill. Instead, Brown said he will continue pushing his own measure that would allow people to buy into Medicare, the federal insurance program for the aged and disabled, at 55 years old. Brown has received $50,500 from the insurance industry since 2010.

Methodology:MapLight analysis of campaign contributions to Democratic and independent senators in the 115th Congress from PACs and employees of the health and accident insurance industry from November 29, 2010, to November 28, 2016. Contributions data source: OpenSecrets.org.