Today, December 18th, the world celebrates International Migrants Day, and SOA Watch wants to express, above all, our solidarity with and love for all people who are forced to flee their countries of origin.

According to the latest UNHCR report, “Global Trends: Forced Displacement 2017”, 68.5 million people worldwide have been forced to leave their homes due to wars, famines, and other political conflicts — 24.4 million of these people have received refugee status in the countries of destination. It is important to note that these figures do not reflect the magnitude of the horror that those who are forced from their homeland face. These figures also fail to reflect how the situation is further exacerbated by the US and Europe closing their borders, the increasing power of the right and counterrevolutionary forces worldwide, and a complete lack of accountability for any war crimes or violation of international humanitarian law.

Behind the figures are the lives and names of people who have been victims of these deadly policies. Today we remember Jakelin Amei Rosmery Caal Maquin, a seven year old Guatemalan q’eqchi girl who died in the custody of the US Border Patrol on December 8th.Jakelin was from Raxruha, Alta Verapaz, Guatemala — a place where the US supported and promoted counterinsurgency war during the internal armed conflict that left more than 200,000 dead, 45,000 missing, more than a million internally displaced, 600 massacres and genocide against the Mayan people according to the United Nations Historical Clarification Commission (CEH) and the Human Rights Office of the Archdiocese of Guatemala’s Project for the Recovery of Historical Memory (REMHI).

We express our indignation at Jakelin’s death because we know that it was a direct result of a history of intervention and violence in the region. At SOA Watch, we have and will continue to denounce publicly the root causes that are forcing migration in our continent, especially from Central America. Undoubtedly, the disastrous and devastating impacts of US interventionist and security policies are reflected in the massive displacement we see today of migrants and refugees, which includes young people, indigenous communities and communities of color. We say again and again – it was the state!

This past November, SOA Watch facilitated various protest actions in the Nogales, Arizona and Nogales, Sonora, as well as in other Latin American. Together, we denounced the policies that dehumanize and criminalize migrants, asylum seekers and refugees, which go against the human and international right to seek refuge. Today, International Migrants Day, we renew our commitment to continue working for an end to US intervention in Latin America and the closure of the School of the Americas; an end to the Mérida Plan and the Alliance for Prosperity; the demilitarization and the disinvestment of borders; an end to the racist systems of oppression that criminalize and kill migrants, refugees, and communities of color; and for respect, dignity, justice, and the right to self-determination of all communities.

We call for solidarity with migrants around the world who seek a dignified life, we call on ourselves to fight for a better world, and we echo the cry at the heart of the migrant struggle around the world – no human being is illegal! 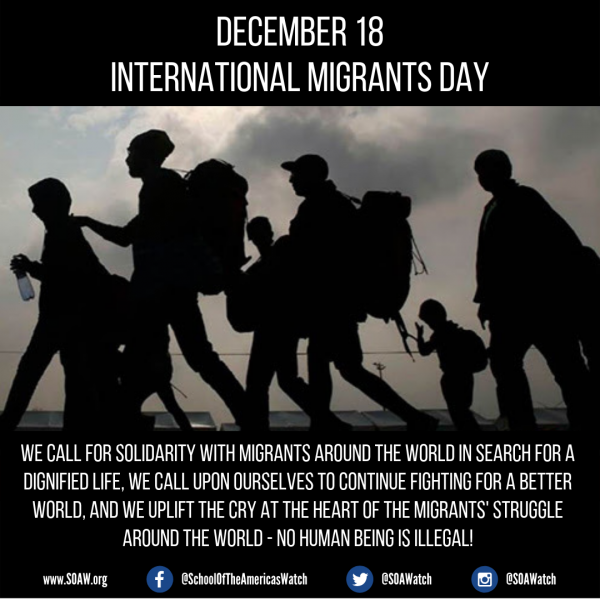