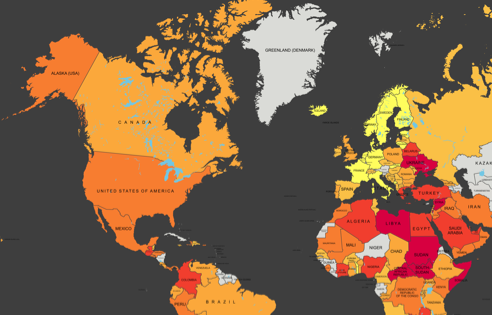 International Report Ranks US Poorly For Treatment Of Workers

Where are the worst places on the planet to be a worker?

A new report by the International Trade Union Confederation, an umbrella organization of unions around the world, sheds light on the state of workers’ rights across 139 countries. For its 2014 Global Rights Index, the ITUC evaluated 97 different workers’ rights metrics like the ability to join unions, access to legal protections and due process, and freedom from violent conditions. The group ranks each country on a scale of 1 (the best protections) to 5 (the worst protections).

The study found that in at least 35 countries, workers have been arrested or imprisoned “as a tactic to resist demands for democratic rights, decent wages, safer working conditions and secure jobs.” In a minimum of nine countries, murder and disappearance are regularly used to intimidate workers.

Denmark was the only country in the world to achieve a perfect score, meaning that the nation abides by all 97 indicators of workers’ rights.

The U.S., embarrassingly, scored a 4, indicating “systematic violations” and “serious efforts to crush the collective voice of workers.”

“Countries such as Denmark and Uruguay led the way through their strong labour laws, but perhaps surprisingly, the likes of Greece, the United States and Hong Kong, lagged behind,” wrote ITUC general secretary Sharan Burrow in a statement about the report. “A country’s level of development proved to be a poor indicator of whether it respected basic rights to bargain collectively, strike for decent conditions, or simply join a union at all.”

Here’s a look at the world rankings. Darker shades represent worse protects for workers. A score of 5+ means that active conflicts, like those in Syria or Sudan, block any legal protections for workers.