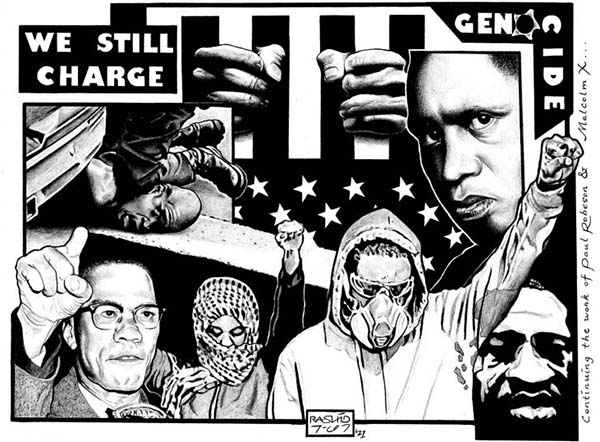 International Tribunal Seeks To Charge US Government With Crimes Against Humanity

‘In The Spirit Of Mandela.’

In this era of police violence, pandemic worries, and economic crisis, it is no surprise that U.S. (and local) government agencies have a poor track record of sharing information honestly and directly—especially information about their own complicity in actions and policies that are undemocratic, militaristic, racist, sexist or otherwise oppressive.

Basic truths about the society we live in are actively suppressed and denied—including truths about the imprisonment of those whose political views and actions challenge the powers that be.

Though the growth of the prison industry has been well documented, there is virtually no documentation and even less news about the imprisonment of many who would be considered political prisoners by any international human rights standards. This is due to a joint coverup effort by both the government and corporate media.

But that coverup may no longer be sustainable

An historic International Tribunal on U.S. Human Rights Abuses Against Black, Brown and Indigenous Peoples will take place in New York City on October 22-25, 2021. It is designed to propel this and related issues into the forefront of public consciousness.

The Tribunal coalesces an unprecedented alliance of attorneys, academics, and organizers ranging from Black Lives Matter activists, former Black Panthers, civil rights advocates and the Puerto Rican decolonization movement, to immigrant rights survivors of the detention centers, and Indigenous peoples fighting for their sovereignty against land theft, fracking, and neglect.

This coalition could not have come together—nor can it remain united and organize for effective future change—without fully understanding the historic context for this work. December 2021 will be the 70th anniversary of a similar campaign for human rights launched a few years after the United Nations was formed. At that time prominent African American leaders and their allies brought a petition to the U.N. that boldly stated: “We Charge Genocide!” The 2021 Tribunal will reassert this charge and relate it to more recent efforts oriented towards 21st Century conclusions.

A 1991 article by one of us (Bob Lederer) [see below] reported on the previous year’s International Tribunal on the Human Rights Violations of Political Prisoners and Prisoners of War in the United States, as well as earlier efforts to internationalize these issues.

Citing past successes from grassroots worldwide organizing, it noted “[A]ctivists believe that even those facing life sentences may yet see the light of day.” Indeed, over the past three decades, that has come to pass for perhaps half of the then-100+ U.S. political prisoners. While some were released on parole with strong legal work and minimal mobilizations, most only got out after sustained grassroots pressure campaigns, often carried out for many years and including strong international components.

Among the many successes:

With life-size cardboard cutouts of Oscar seen in small towns, mountain communities, and every major city throughout the island archipelago, an unprecedented array of pro-statehood advocates, status quo “commonwealth” supporters, and independentistas joined forces to demand his unconditional release. After the annual United Nations Decolonization Committee hearing on Puerto Rico in 2016, the Committee—in addition to joining the global outcry to “bring Oscar home”—vowed to form an official U.N. delegation to visit him in prison if he were not released in the coming year. In 2017, just days before leaving office, Obama announced the plans for López Rivera’s freedom; he returned to his country a celebrated national hero.

Nonetheless, three dozen U.S. political prisoners still remain incarcerated, the majority of them in their senior years and ailing, in some cases with terminal illnesses. Prison medical care is substandard at best for all incarcerated people, but political prisoners have also faced the wrath of a vengeful police apparatus. All are now the focus of urgent pressure campaigns by their supporters demanding (depending on the case) immediate parole, clemency, or court-ordered release. Some examples include:

These campaigns are especially urgent in the wake of the deaths in prison or shortly after release of 21 U.S. political prisoners over the past 35 years. In many cases, family members and doctors are convinced that, had the prisoners been freed as they got sicker, they might have had a chance to survive longer by escaping high stress prison conditions and having access to better quality medical care.

Meanwhile, several former political prisoners and activists targeted by the state but not arrested have been living in exile for many years. The most renowned, former Black Panther Assata Shakur, was arrested and shot in the back by police in 1973. She then overcame seven separate COINTELPRO-orchestrated charges but was ultimately railroaded to a life sentence on the eighth (along with Sundiata Acoli, see above)—in a trial her lawyer called “a legal lynching and a kangaroo court.” (See Rosemari Mealy, ed., “Assata Shakur: The Life of a Revolutionary,” CovertAction Quarterly, Fall 1998 (No. 65), pp. 34-44.)

After surviving an oppressive all-men’s prison in New Jersey, Shakur escaped in 1979 with the help of clandestine Black and white radical comrades. She was later granted political asylum by Cuba, where she has been active in community life. Successive U.S. and New Jersey governments have boosted the bounty for her forced return to $2 million, requiring her to be especially cautious to prevent kidnapping by the CIA or a vigilante.

Meanwhile the past three decades have seen a whole new generation of political prisoners incarcerated, mostly from the newer movements that have blossomed, though some 1960s activists have also been framed years later by an FBI determined to punish their longtime adversaries. Some examples:

Also, Jessica Reznicek, a North American Catholic Worker ally, is serving eight years for related civil disobedience actions against the same pipeline in Iowa. Since 2020, a similar, Indigenous-led movement against Line 3 (another oil pipeline encroaching on Native land) in Minnesota has led so far to several people being charged with felonies. Those cases are pending.

Most notably, army soldier Chelsea Manning spent seven years in military prisons, during which a U.N. Rapporteur found her to have been tortured. After many grassroots campaigns, protests and honors in LGBT Pride marches, President Obama granted clemency in 2017. Later that year, under Trump, she was reincarcerated for 12 months for refusing to collaborate with a grand jury investigation. During her initial incarceration, she came out as trans and had to sue to obtain gender-affirming care.

In a related case, WikiLeaks publisher and Australian citizen Julian Assange is now facing extradition to the U.S. from the U.K. and possible life in prison for publishing data on war crimes, repression and corruption released by whistleblowers. (See CovertAction Magazine, Sept. 7, 2020.) A British judge has denied extradition on grounds that U.S. prisons could not adequately protect him from the risk of suicide (following his years of U.S. and British persecution). Yahoo News reported in September 2021 that, in 2017, the CIA discussed possible plans to kidnap or assassinate the journalist in London.

Pursuing freedom or at least less life-threatening conditions for all of these prisoners, the various support organizations have used a variety of techniques (in addition to the people’s tribunals described below): petitions, mass email campaigns, demonstrations at courts and prisons, packing court proceedings, civil disobedience actions, lobbying, and more.

Importantly, efforts have continued to bring some of these cases, and the larger movements against genocide and eco-cide from which they developed, to international bodies. In 2001, the National Black United Front, December 12th Movement, and others brought charges of genocide against Black people to the U.N. World Conference Against Racism in Durban, South Africa. For years, the United Nations Human Rights Council in Geneva has heard consistent testimony from the U.S. Human Rights Network (USHRN) and others, who have filed documents at the Universal Periodic Review sessions conducted for all nation-states. The USHRN has utilized other U.N. mechanisms to bring U.S. human rights abuses before United Nations-affiliated bodies.

In addition, between 1992 and 2001, a variety of coalitions led by Black, Brown and Indigenous freedom organizations built on the successes of previous efforts to convene international tribunals on U.S. human rights violations and genocide:

The 2021 International Tribunal: In the Spirit of Nelson Mandela

Livestreaming at tribunal2021.com and on Facebook and online via Zoom

The 2021 International Tribunal itself derives from a historic legacy and trajectory, initiated by a U.S.-based coalition, In the Spirit of Mandela. Created in 2018, the coalition recognizes and affirms the rich history of diverse global activists, including Nelson Mandela, Winnie Mandela, Graca Machel Mandela, Ella Baker, Dennis Banks, Cesar Chavez, Fannie Lou Hamer, Fred Korematsu, Lolita Lebron, Rosa Parks, Ingrid Washinawatok, and many more in the resistance traditions of Black, Brown and Indigenous Peoples. Though separate and independent from the In the Spirit of Mandela coalition that called for the Tribunal, the Panel of Jurists (see below) recognizes the important historical precedents that have shaped the charges against U.S. government agencies.

The year 2021 marks the 70 anniversary of the campaign in which African American human rights leaders Paul Robeson and William Patterson, with the support of eminent sociologist Dr. W.E.B. DuBois, presented the “We Charge Genocide” petition to the burgeoning United Nations headquarters in 1951. Then in 1964, Minister Malcolm X (El Hajj Malik el-Shabazz) formed the Organization of Afro-American Unity, in part to bring the case of U.S. human rights abuses to the attention of the U.N. The 2021 Tribunal verdict itself will be delivered in front of U.N. headquarters, but hearings and community testimony will take place at the site of Malcolm X’s assassination, the now-refurbished and Columbia University-affiliated Malcolm X and Dr. Betty Shabazz Memorial and Educational Center in Harlem.

The Panel of Jurists is composed of nine members, with representatives including a former South African Member of Parliament; a board member of the distinguished Nobel Peace Laureate organization with a dozen Nobel Peace officer awardees; a Puerto Rican legal scholar who serves as an expert for the U.N. Committee on Decolonization; a U.N. representative of the oldest inter-faith pacifist organization in the world; an internationally accredited expert on genocide; the director of the only people-centered U.S. human rights network with ECOSOC status and consistent U.N. advocacy; the youngest elected Chair of the Mashpee Wampanoag Tribe and leader of UNITY/the United National Indian Tribal Youth; and the former Chair of the United Nations Working Group on People of African Descent and a judge of the Permanent People’s Tribunal. They are majority women and majority Global South-rooted, from India, Eritrea, Haiti, France, Puerto Rico, the USA and elsewhere. (See list at tribunal2021.com/panel-of-jurists.)

These jurists will preside over two days of testimonies from impacted victims, expert witnesses, and attorneys with first-hand knowledge of specific incidents raised in the charges/indictment.

At the Tribunal, a team of experienced human rights attorneys, acting as prosecutors on behalf of U.S. Black, Brown, and Indigenous people as a class, will be charging the U.S., state and local governments with human and civil rights violations under the following five sections:

As a result of the historic and systemic charges of all the above, the overarching charge of genocide will also be argued, based on 18 USC Sec. 1091 (the U.S. statute making genocide a felony) and the 1948 United Nations Convention on the Prevention of Genocide.

The Panel of Jurists will deliver its Verdict following deliberations and discussions, planned for delivery at the Church Center for the United Nations on Monday, October 25, 2021.

Between the Verdict of the independent Jurists and the ongoing work of the Spirit of Mandela coalition, the lessons of the past will be brought forward to build U.S.-based human rights movements into the future. With these bold visions and newly produced tools, organizers hope that continued repressive measures, including the warehousing of political prisoners, will be left in the past as we step back from the specter of genocide and struggle together for lasting liberation.

Background on the 2021 Tribunal and planned next steps are here.