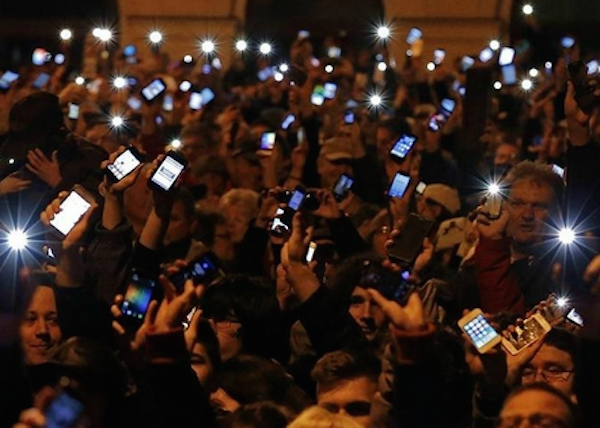 Protests To Sweep US In Defense Of Net Neutrality

Thursday’s vigils are inspired by recent successful protests in Hungary against an internet tax, including this demonstration in Budapest in late October. (Photo: euronews)

In over a dozen cities across the United States, “demonstrators will hold their cell phones, laptops, and tablets above their heads as a symbol of protest, and shine light on the corruption unfolding in Washington, DC.,” according to a statement from organizers, who include Fight for the Future, PopularResistance.org, Free Press, Demand Progress, reddit, and grassroots groups.

Under the leadership of chairman Tom Wheeler, a former lobbyist for the cable and telecommunications industry, the Federal Communications Commission is currently considering what the New York Times calls a “hybrid regulatory approach to net neutrality.” Open internet campaigners warn that the new rules fall short of the strong net neutrality protections that are needed, because it would allow for internet fast and slow lanes.

“This so-called hybrid approach is not a compromise, it is a sham,” Evan Greer of Fight for the Future told Common Dreams. “It allows companies to cut deals with content providers for access to better service. It’s based on untested legal theories that are shaky and won’t hold up in court. Given that the chair of the FCC is a former cable company lobbyist, it is hard not to assume it will fail on purpose.”

Advocates of Net Neutrality are calling for the FCC to reclassify the internet under Title IIof the Communications Act, which would treat the service as something to be protected in the public interest, like water and electricity.

Thursday’s coordinated actions are just the latest in massive mobilizations to defend net neutrality, including an “Internet Slowdown” protest in September, during which supporters made more than 312,000 calls to Congress and submitted over 700,000 comments to the FCC.

Campaigners say the issue has attracted broad support because it is a matter of social justice and access to resources for the poor and marginalized, at a time of media consolidation and corporate power.

“The internet is an important avenue to freely express ourselves and communicate,” Margaret Flowers of PopularResistance.org told Common Dreams. “If it is no longer an open platform, we will see corporate voices dominate.

“We are not going to roll over and let the FCC take our rights away,” said Greer. “Those in power should expect rebellion over this if they don’t listen to the public and do the right thing.”

Reports and commentary on the vigils are being posted to Twitter: