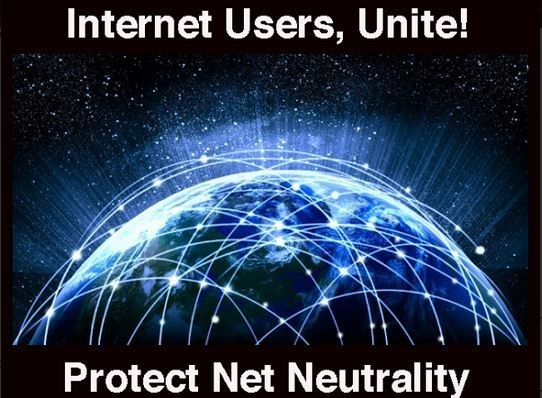 Internet For The Wealthy On The Way Unless We Stop It

The Occupy the FCC camp is over. Stay tuned for next steps!

*** We need to turn up the heat! Join us to at the FCC (12th St and Maine Ave, SW) in Washington, DC every day from May 7 to May 15 at noon and 5 pm to picket. We are here 24 hours a day so you can join us at any time and bring your sleeping bag if you can stay overnight. Spread the word.***

In what the New York Times describes as “a net neutrality turnaround” the Obama administration’s new FCC chairman is proposing rules that will create an Internet for the wealthy. The new plan to create a pay to play Internet came to light Wednesday in the Wall Street Journal.

Under the plan wealthy corporations will be able to purchase faster service, while those that cannot do so will have slower service. Rather than an open Internet for all the US will be moving to a class-based Internet. Of course, this will mean that when Netflix and other corporations purchase faster Internet, the consumers who use their service will be paying more to watch movies and download information. As a result, more money will be funneled from working Americans to wealthy telecom giants.

We recently wrote that the United States has lost its democratic legitimacy and now was a plutocratic oligarchy. This is what plutocracy looks like – policies designed for the wealthy, so they can make more money from the rest of us.

According to the Times:

“The new rules, according to the people briefed on them, will allow a company like Comcast or Verizon to negotiate separately with each content company – like Netflix, Amazon, Disney or Google – and charge different companies different amounts for priority service.

“That, of course, could increase costs for content companies, which would then have an incentive to pass on those costs to consumers as part of their subscription prices.”

In the future, if a new start-up – the future Twitter or Facebook – begins it will have a very hard time competing with those who are established Interne companies because the slower service of the start-ups will make them less consumer friendly. As a result we can expect less creativity on the Internet.  As Stacy Higginbotham wrote: “The plans took the hallmark of network neutrality — the notion that ISP shouldn’t discriminate between the traffic flowing over their networks — and turned it on its head.”

The proposal is being shared with other members of the Commission today. There will then be amendments suggested to garner majority support and the plan is to vote on the proposal on May 15,

In a call to action, Save The Internet writes:

What if you had only three weeks before the Internet you know and love was about to disappear?

Would you spend your time binging on listicles or the final season of Breaking Bad? Or would you do something about it?

Would you email all your friends with the news? Blast your social media networks? Demand that Congress and the president keep this amazing invention from going away?

If the Internet had only three weeks left, would you take to the streets and raise hell?

I bet you would.

And here’s your chance to prove it: Because three weeks from today the Internet as we know it may not disappear, but it could be a lot closer to the precipice.

In addition, call your elected representatives.  Tell them if net neutrality is ended, you will hold them accountable by withholding your vote. Both parties hope to control the senate after the mid-term elections, so you have more power than usual to let them know they are losing your vote if they fail to take action to stop the FCC proposal. The number for Congress is 202-224-3121.

I am writing to oppose rules that will allow for discrimination on the Internet – where the wealthy can purchase faster Internet service and everyone else continues to have slower service.

I do not want telecom giants and wealthy Internet companies to determine the future of the Internet. I want new ideas to flourish on the Internet and not be blocked because they do not have sufficient funds to purchase fast service and compete.

I do not want the Internet to be turned into another vehicle that allows money to flow from working Americans to the wealthiest — where web-based services like Netflix purchase faster service and pass the costs on to consumers.

The proposal being considered would kill rather than protect Net Neutrality and allow rampant discrimination online. The Internet should be viewed as a public good and should be operated consistent with our rights to Freedom of Speech and Freedom of the Press. Turning the Internet into a pay to play scheme is unacceptable.

Chairman Wheeler knows this proposal is going to be unpopular and in response to the Wall Street Journal and New York Times is denying there has been a “turnaround.” But, his statement is carefully worded and would allow exactly was has been reported.

How Did We Get To Class-Based Internet?

This move to end net neutrality should be placed at the door of President Obama and the US Senate. Obama appointed a former industry head to become chair of the FCC and the Senate unanimously confirmed him.

In April 2008 during his presidential campaign, Barack Obama took the side of the people saying: “The most important thing we can probably do is to preserve the diversity that’s emerging through the Internet…something called net neutrality. I will take a backseat to no one in my commitment to network neutrality.” While he campaigned as a populist he has governed as a plutocrat – on this issue and so many others.

When Tom Wheeler was nominated by President Obama to become the Chairman of the FCC many in the internet freedom community expressed deep concerns.  For decades Wheeler had represented the telecom industry in Washington, DC. From 1979 to 1984, Wheeler headed the National Cable Television Association, now named the National Cable and Telecommunications Association.  He then worked in the telecom industry for 8 years followed by taking over as head of the Cellular Telecommunications & Internet Assn. in 1992, leaving in 2005.  Wheeler went on to become a major Obama fundraiser and adviser.  In fact on his bio page at the FCC this is expressed as “He is the only person to be selected to both the Cable Television Hall of Fame and The Wireless Hall of Fame, a fact President Obama joked made him ‘The Bo Jackson of Telecom.'” Appointing Wheeler was akin to putting the industry in charge of the future of the Internet.

Save The Internet reports this could be the end of the Internet as we know it: “It means we could be headed toward a pay-per-view Internet where Web sites have fees. It means we may have to pay a network tax to run voice-over-the-Internet phones, use an advanced search engine, or chat via Instant Messenger. The next generation of inventions will be shut out of the top-tier service level. Meanwhile, the network owners will rake in even greater profits.”

Now Wheeler is set to propose what the industry has wanted, an end to net neutrality, that will allow them to charge us more for service and created financial barriers that will prevent new services from challenging their domination of the Internet.

If you want an open Internet, take action today. We can stop this – but we must act now.

Please contact the people above and forward this to everyone you know.

Marvin Ammori, The FCC’s New Net Neutrality Proposal Is Even Worse Than You Think, Slatest

Gerry Smith, Everything You Need To Know About The End Of Net Neutrality, Huffington Post