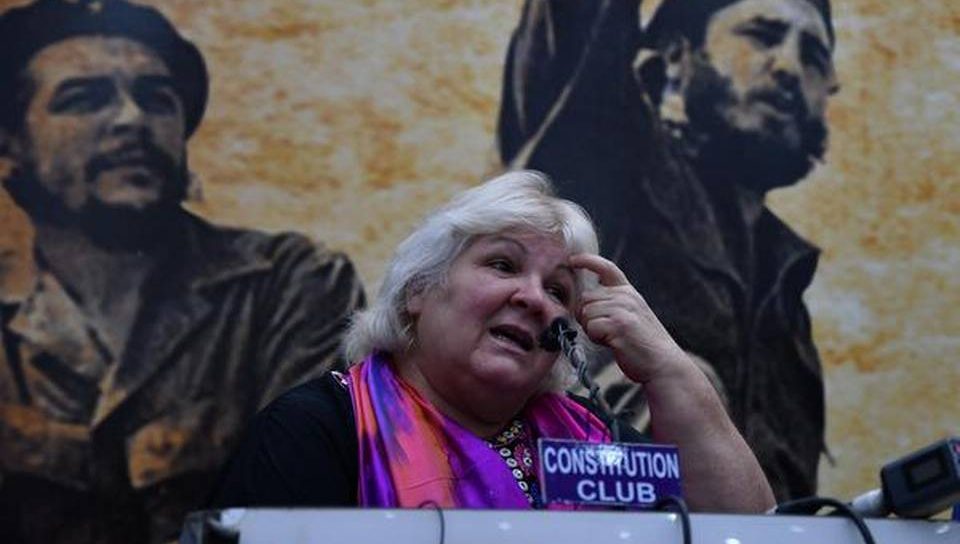 Aleida Guevara in a free-wheeling conversation about her famous father, her work as a medical practitioner and the current scenario in Cuba

Dr Aleida Guevara’s famous surname still evokes adulation among admirers of Ernesto ‘Che’ Guevara, the Argentine revolutionary. His iconic image, with his beret, intense, faraway look and brooding visage, snapped by Alberto Korda, has become a symbol of resistance and idealism. Beneath a black-and-white photograph of Che’s, which has pride of place in Politburo member MA Baby’s house in Thiruvananthapuram, Aleida, a medical practitioner like her father, settled down to talk about her father, his legacy and how present-day Cuba continues to be stand up to the economic blockade imposed by the US.

With the help of an interpreter, she answered questions in rapid-fire Spanish, choosing each word carefully and insisting that the interpreter get the import of each word correctly. In the summer of 1959, Guevara had visited India as Fidel Castro’s ambassador on a goodwill trip to 14 countries. Sixty years later, Aleida visited Kerala and Delhi to celebrate the 60th anniversary of the Cuban revolution. Excerpts from an interview…

What is the image of your father that you carry with you?

I was four when he left and so I don’t have many images of Papa. He was a great leader and revolutionary for many but for us, he was our father. He was a happy man, very fond of his children.

Since you have followed in Che’s footsteps and become a doctor, what do you think is the biggest challenge that medical practitioners face today?

No child should die because of lack of medicines. We might be able to help but we can’t because of the restrictions. As a result of the blockade, we have been forced to explore and research alternative medicines and native herbs that were used by Africans to cure different illnesses.

The two years I spent in Angola were difficult. I was upset and shocked to see people dying of cholera. It is impossible to think of such a thing happening in Cuba. There is nothing as precious as a child’s life because he/she is the future. I was able to save many lives there but we also lost many.

Only those who see it as a vocation should choose the medical profession. Don’t become a doctor to become rich. Become one to serve the people. If you cannot empathise with the pain of a patient, you should quit.

How has the economic blockade of the US affected the Cuban economy?

In many ways. For example, Japan can’t buy the iron Cuba is rich in. If they do that, the US will not buy a thing made of that iron from Japan. To give you another instance, Cuba needs rice. However, we don’t cultivate enough of rice. So, we have to import. Although good-quality rice is there in India, the US will not let Indian farmers sell the rice to Cuba. They won’t allow commercial activities. Donations are different.

As a result of the blockade, Cuba, which is very advanced in health care and medicine, is unable to sell their breakthrough vaccines and treatments to other countries. We have vaccines for lung cancer and certain other lifestyle-related illnesses. But we are unable to market it. Organisations like MediCuba Europa, a network of associations and NGOs that works in the public health scene in Cuba, as a mark of solidarity, helps the country procure raw materials for some of the medicines and helps in marketing it too.

The Centro de Estudious Che Guevara had published the iconic The Motorcyle Diaries? Are there any plans for new books to tell his story anew for a new generation?

The Centro de Estudious Che Guevara, which had posthumously published the iconic The Motorcyle Diaries and other books by Che based on his notes and diaries, will be publishing a book on his travels to India, Egypt, Syria and so on and his interactions with Jawaharlal Nehru and other world leaders.

Did you ever, at any point of time, want to take off on a motorbike to understand the world and the people from a new perspective?

(Laughs) I don’t like two-wheelers. My youngest brother, Ernesto, is very fond of the motorbike and loves travelling.

Is there a kind of pressure because you are your father’s daughter? And how do people in Cuba see Che’s four children, Alieda, Camillo, Celia and Ernesto?

There are three groups of people. One group sees us as Che’s children and gives us a lot of love and tries to take care of us; the second group feels that since we are Che’s children, we must be role models for society.

The third group treats us as any other Cuban. It is my mother, Aleida March, who told us that as Che’s children, we would receive a lot of love from people and to be polite to all. She made sure that we had a normal childhood without any kind of privileges.

What, in your opinion, is the biggest challenge that we face in the world?

Apathy and indolence. If values and ethics disappear, existence itself is endangered. We are witnessing how that has affected countries like Syria that is caught in a civil war. The world is not reacting enough against such situations. Similarly, many countries are turning a blind eye to the US political interference in Venezuela.

Fake news and paucity of true information is very dangerous. As a result of that, person’s choices and thoughts could be moving in the wrong direction and that could be dangerous for society.

For instance, the Amazon is the largest lung in the world. But it also has large deposits of iron. The large-scale mining there is destroying the forest. Do the people living there know how dangerous the destruction of the rain forest is? We can live without iron but not without oxygen.

Any regrets about your father’s choices?

No, not at all. I respect his decisions. However, I wish we had more time to spend together as a family.

How would you like future generations to remember Che?

I don’t know how the future will see Che and his work. I hope they try to learn about Che’s ideology and the ideals that inspired him. I hope they remember his unrelenting fight against imperialism, oppression and poverty.