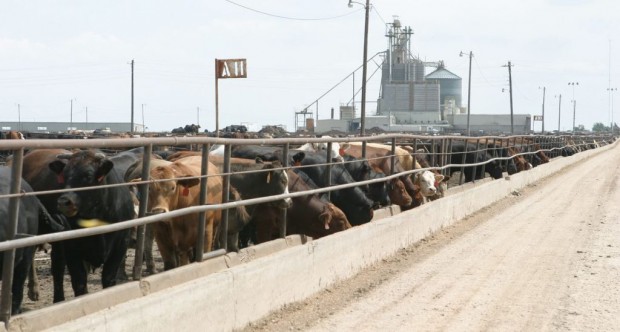 Investors worth trillions of dollars have launched a campaign calling on the world’s 16 largest food companies to begin investing in plant-based protein to combat environmental and health risks associated with animal agriculture.

The Farm Animal Investment Risk and Return (FAIRR) has organized a group of 40 investors in a campaign to raise awareness about the environmental and health risks associated with continuing to support factory farming and the over reliance on animal agriculture. The investors sent a letter to 16 global food producers asking them to acknowledge the risks of industrial farming, specifically animal agriculture, and to invest in plant-based protein sources.

The group of investors collectively manage $1.25 trillion in assets, including the fund arm of insurer Aviva, the fund arm of Norwegian lender Nordea, Boston Common Asset Management, and Impax Asset Management, as well as other charities and ethical investors. The group was organized by FAIRR, an investor initiative focused on raising awareness on the dangers of factory farming.

“Backed by a new briefing entitled ‘The future of food – the investment case for a protein shake up’, produced by the FAIRR Initiative and ShareAction, the investors warn of the risks associated with the growing global demand for protein and an over reliance on the unsustainable factory farming of livestock for its supply,” reads a press release from the group. “The briefing highlights the environmental, social and public health risks inherent in this model, which financial markets are not currently valuing appropriately.”

The report “The future of food – the investment case for a protein shake up” argues that “factory farming is emerging as a high-risk production method linked with significant environmental damage and major public health issues, such as the emergence of antibiotic resistant bacteria and outbreaks of pandemics such as avian flu.”

The report lists detrimental effects of animal agriculture including resource scarcity, deforestation,  practices such as close confinement and genetic manipulations focused on high production at the expense of welfare, public health problems due to overconsumption, and supply chains that rely on exploitative and unsustainable practices which are inherently more susceptible to disruption.

“The world’s over reliance on factory farmed livestock to feed the growing global demand for protein is a recipe for a financial, social and environmental crisis,” said Jeremy Coller, founder of the FAIRR initiative and chief investment officer at private equity company Coller Capital. “Investors want to know if major food companies have a strategy to avoid this protein bubble and to profit from a plant-based protein market set to grow by 8.4 percent annually over the next five years.”

The investors’ report cites a recent study by Oxford University which concluded that if the public health and environmental health risks associated with increasing demand for animal products are not addressed it could cost up to $1.6 trillion globally by 2050.  “Imbalanced diets, such as diets low in fruits and vegetables, and high in red and processed meat, are responsible for the greatest health burden globally and in most regions,” said study lead author Dr Marco Springmann.

The claims made by the investors echoes sentiments expressed in the documentaryCowspiracy: The Sustainability Secret. Originally released in 2014, Cowspiracy explores the impact of animal agriculture on the environment and the influence of the meat industry on the world’s leading environmental organizations. Cowspiracy claims that animal agriculture accounts for up to 51% of greenhouse gas emissions while the investors’ report finds that livestock account for 14.5% of GGE.

Whichever number you trust, it seems fairly obvious that the way humankind has chosen to obtain protein is not sustainable. Whether you elect not to eat meat because you find it  immoral, or because you do not want to support the continued degradation of the environment, it appears to be a worthy endeavor. Choosing a meatless diet is a thoughtful decision that takes into account not only your own health, but the health of the planet and future generations.

Many people are extremely sensitive when it comes to their  diet. Telling someone that the food they are ingesting is causing harm to their health and the planet can be difficult. However, if we truly believe in the power of liberty and the evolution of humanity we must provide examples of humans making wise decisions on their own accord, not because the authorities or State say so. If we are not capable of changing our individual behavior for our own future benefit this will justify the use of State enforcement in the minds of the masses. It’s time to rethink everything we know about our diet, the environment, and the way we treat animals.