Above photo: Farmer Joel Kurtenbach stands Dec. 31 on the land of his former dairy farm in Wyoming, Iowa. “For the first time in my life, I don’t know what I’m going to do,” Kurtenbach said. Andy Abeyta/The Gazette.

Like others, Jones County farmer hoped to start over.

Wyoming, Iowa — For 25 years, Joel Kurtenbach managed a successful Jones County dairy farm and was featured in trade publications for progressive business decisions, such as buying a system in 1999 that could milk 120 cows in 90 minutes.

So he pivoted, selling his 500 dairy cows to a California family and converting his barns to feed cattle for beef. 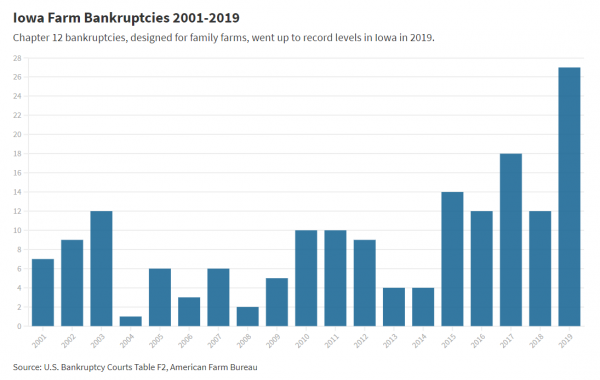 “We raise them to 600 pounds and they go to feedlots in Nebraska and Colorado,” said Kurtenbach, 59, in early November. “We need one more investor worth $600,000 to keep the farm.”

But on Dec. 15, Kurtenbach watched silently as his nearly 700-acre farm near Wyoming was sold in bankruptcy court.

There were 27 farm bankruptcies in Iowa in 2019 — more than double the 13 bankruptcies in 2018, the American Farm Bureau Federation reported. This was despite the $1.58 billion the federal government paid Iowa farmers in Market Facilitation Program payments to ease losses because of the trade dispute with China.

“The government has provided a lot of short-term funding to help farmers get through the year,” Hart said, referring to market facilitation and coronavirus food assistance programs, which funneled two rounds of aid to farmers in 2020.

But for farmers living close to the edge, “there are some long-run problems that don’t necessarily get fixed through a market facilitation payment,” Hart said. “They are needing some additional market recovery to save themselves.”

Several Iowa meat processing facilities halted operations in April after COVID-19 outbreaks among employees, NPR reported. It hurt farmers who had cattle ready to sell at that time, Hart said.

The COVID-19 pandemic slowed growth in global meat imports outside of China, the U.S. Department of Agriculture reported. Although the USDA expects that to rebound slightly in 2021, it was hard for producers without cash reserves.

As if that wasn’t enough, Iowa faced a drought and the Aug. 10 derecho that left 550,000 acres of Iowa corn unfit to harvest, the Associated Press reported.

Kurtenbach knows he’s a victim of bad timing. He moved from dairy to beef at the worst possible moment and although he had contracts to sell cattle, it wasn’t enough to avoid bankruptcy. He filed in November 2018, hoping he could free himself from debt and emerge with enough money to continue farming.

“Everyone said I could start over,” he said. “If I had known then what I know now, I never would have filed.”

Kurtenbach’s main frustration with the bankruptcy process is there was supposed to be a public auction Dec. 8, which he thought would allow his land to sell for between $4.2 and $4.4 million. He thought if the auction was advertised properly, organic growers and others would be interested in the farm, which is certified organic.

But with COVID-19, the public auction was canceled. Just two farmers bid in a limited auction in a courtroom in U.S. District Court. The $3.47 million final price is only enough to pay off the primary creditor, Farm Credit Services of America, with some money going to Kurtenbach’s uncle, who had invested in the farm.

Secondary creditors will get nothing. There are no proceeds for Joel Kurtenbach to start over.

The deal allows Kurtenbach and his mother, Jeanette Kurtenbach, 81, to stay in the farmhouse for a year, paying $600 a month rent after Feb. 15.

“The higher bid with the provision Mr. Kurtenbach can remain for $600 a month is about as good as we can expect to get here,” Chief Bankruptcy Judge Thad J. Collins said Dec. 15. “We ended up with more money than we started with. Bankruptcy court is almost always a tough situation. Thanks to everyone for making the best of a tough situation.”

Patrick Bauer, a University of Iowa law professor who studies bankruptcy and agricultural law, said there are some similarities between the financial challenges of recent years and the 1980s farm crisis, when a glut of commodities and a decline in exports caused record level farm debt, bank closures and farmer suicides.

But there are some significant differences, Bauer said. The average Iowa farm is 27 percent bigger now than in the early ‘80s and more farmers today have contracts with larger companies.

Chapter 12 in federal bankruptcy code originally was added to help farmers struggling during the Great Depression, but it expired in the 1950s. U.S. Sen. Chuck Grassley, also a farmer, helped bring Chapter 12 back in 1986, providing a simpler way for a family farm or fishing operation to pay off debt in three to five years.

For every Chapter 12 bankruptcy filed, there are other farms that would have gone under if creditors hadn’t cut deals with debtors to avoid bankruptcy proceedings, Bauer said. But not all lenders are willing to restructure loans or get less than they are due to avoid bankruptcy.

Creditors and others pushing farmers to fold often say “why postpone the inevitable?” Bauer said. But there’s always hope the next year will be better.

“At some point, things will turn around and we don’t know when that will be,” he said. “There’s so much human drama here. It gets played out in a matrix of legal stuff.”

A cold wind blew through Kurtenbach’s empty milking parlor Thursday, the last day of 2020. He pointed out the Swing 28 milking system — a step up from that system he bought in 1999 — and recalled days when he had two dairy herds on the farm.

The dairy cows are long gone and the beef cattle were taken to market last month. Kurtenbach’s skidloaders, tractors and hay equipment were sold Wednesday for half their value, he said.

The organic hay Kurtenbach grew to feed his own animals he’ll now sell to other farmers.

“I’ll start selling that next week,” he said. “A lot of mine is baleage, so I’m going to see some of the Amish farmers.”

The farm sale is final Feb. 15, but the Kurtenbachs will stay in the house until April, when the hay is gone.

“For the first time in my life, I don’t know what I’m going to do,” Kurtenbach said.

He may go to Texas, where he managed cattle feeding operations in the 1980s and still has friends. Jeanette, his mother, has five other children in Iowa and Minnesota and will stay around the area.

But Kurtenbach, whose whole life has been buying, building and managing farms, can’t quite give up hope about this piece of land in Jones County. If an eleventh-hour investor came in, maybe Kurtenbach could buy back the farm — or at least part of it, he said.

“The main thing I wanted to do was start over.”