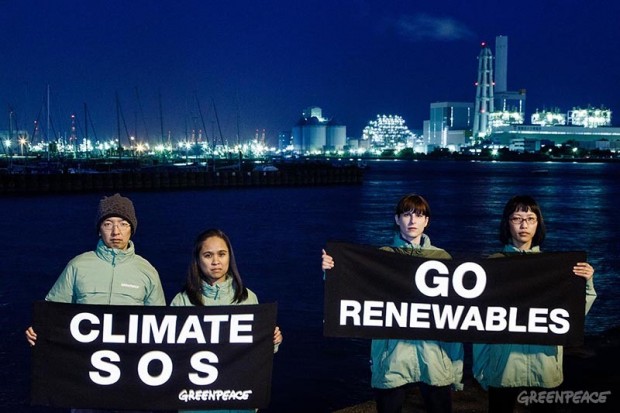 Above: Greenpeace activists display the message reading: ‘Climate SOS and Go Renewables’ outside the Minami-Yokohama gas power plant and the Isogo coal power plant near where the Intergovernmental Panel on Climate Change is meeting. Highlighting the cause of climate change and the solution to the unfolding crisis, Greenpeace urged for a rapid shift away from fossil fuels and an accelerated clean energy revolution.

Increasing evidence is emerging that the policy summaries on climate impacts and mitigation by the UN Intergovernment Panel on Climate Change (IPCC) were significantly ‘diluted’ under political pressure from some of the world’s biggest greenhouse gas emitters, including Saudi Arabia, China, Brazil and the United States.

Several experts familiar with the IPCC government approval process for the ‘Summary for Policymakers’ (SPM) reports – documents summarising the thousands of pages of technical and scientific reports for government officials – have spoken out about their distortion due to political interests.

According to David Wasdell, who leads on feedback dynamics in coupled complex global systems for the European Commission’s Global System Dynamics and Policy (GSDP) network, “Every word and line of the text previously submitted by the scientific community was examined and amended until it could be endorsed unanimously by the political representatives.”

In a detailed paper critiquing the WG1 Summary for Policymakers, Wasdell revealed that:

“Greatest pressure to establish grounds for the highest possible budget came from those countries whose national economy, political power and social stability depend on sustaining the asset value and production revenue derived from exploitation of their resources of fossil energy. Additional pressure was applied to the political agents by those vested interests whose sustained profitability was based on the extraction, refining, marketing and use of fossil energy as the ground of the global economy.”

As an accredited reviewer for the IPCC’s 2007 Fourth Assessment Report, Wasdell had previously criticised the political approval process for playing down amplifying feedbacks which could accelerate climate change. That charge was strongly denied by the IPCC’s lead authors at the time, although political interference amounting to “scientific vandalism” was alleged by other sources.

Wasdell told me that scientists familiar with the political approval process in Stockholm for the new WG1 Summary for Policymakers – including WG1 co-chair Prof Thomas Stocker who had signed the 2007 rejoinder to Wasdell – had confirmed that governments fought to amend text that would damage their perceived interests. His paper says:

“… the objections were led by Saudi Arabia, strongly supported by China, and associated with an emerging group of ‘like-minded nations.’ The impasse was broken following suggested modifications of both text and diagram provided by the representatives of the USA. The resulting compromise safeguards the vested interests of global dependency on fossil sources of energy, while constraining the capacity of the international community to take any effective action to deal with the threat of dangerous climate change.”

WG1 co-chair Prof Thomas Stocker, however, denied any knowledge of such political pressure, describing these allegations as “not correct for WG1.” He conceded that “the situation is different” for WG2 and WG3.

Wasdell said that the draft submitted by scientists contained a metric projecting cumulative total anthropogenic carbon dioxide emissions, on the basis of which a ‘carbon budget’ was estimated – the quantity of carbon that could be safely emitted without breaching the 2 degrees Celsius limit to avoid dangerous global warming. He said that the final version approved by governments significantly amended the original metric to increase the amount of carbon that could still be emitted.

The total carbon budget according to this estimate is about 1,000 gigatonnes of carbon (GtC) – although over 531 GtC was emitted already by 2011, leaving 469 GtC left. Applying the “corrected non-linear function” reduces this available budget to just “280 GtC” – this figure does not account for the role of greenhouse gases other than CO2, including the potential impact of thawing permafrost or methane hydrates.

If included, they would reduce the budget even further. Current emissions reduction pledges, therefore, still guarantee disaster. His paper reads:

“… present levels of international contribution towards the reduction of emissions still led to a cumulative total of 2000 GtC by the year 2100. That left an emissions reduction gap of some 1097 GtC between promised reductions and the 903 GtC required to prevent temperature increase exceeding the policy goal of 2°C.”

“The summary for policymakers is a document of appeasement, not fit for purpose. In reality, if my calculations are correct, we not only don’t have much of a carbon budget left, we have already overshot that budget – we’re in overdraft.”

Wasdell’s claims about the politicisation of the IPCC’s summary reports for policymakers are corroborated by other scientists.

In a letter addressed to senior IPCC chairs dated 17th April, Prof Robert Stavins – a lead author for the IPCC’s Working Group 3 focusing on climate mitigation – complained of his “frustration” that the government approval process “built political credibility by sacrificing scientific integrity.” His critique was, however, widely misrepresented by climate deniers as proving that the IPCC’s scientific verdict about the dangers of global warming are too alarmist.

Leading the pack, Daily Mail reporter David Rose attempted to equate Stavins’ concerns with those of economist Richard Tol, who withdrew “from the summary of an earlier volume of the full IPCC report, on the grounds it had been ‘sexed up’ by the same government officials and had become overly ‘alarmist.'”

Yet as noted by Dimitri Zenghelis, principal research fellow at the London School of Economics Grantham Research Institute on Climate Change and the Environment, Tol’s claims about IPCC alarmism are riddled with “significant errors and misrepresentations,” “selective” and “misleading” quoting, and based on his own paper containing “a number of mistakes”, as well as a “fundamentally flawed” understanding of “the risks of climate change.”

Prof Stavins himself dismissed the denialist “fringe elements of the press and blogosphere” which “capitalised on the situation by distorting the message of my original post to meet their own objectives.”

“My expressed concerns,” Stavins told me, “were about the government approval process of one section on international cooperation of the Working Group 3 Summary for Policymakers.” He emphasised: “My remarks did not include any comments on and have no implications regarding the integrity of climate science.” Rather, government representatives in Berlin sought to “protect their respective countries’ interests by minimising text that could be perceived to be inconsistent with their negotiating positions.”

“At our IPCC meeting, they treated the SPM as though it were a legal document rather than a scientific report. To achieve consensus, the text of the SPM was made vaguer in many places, and its content diluted to the extent that in some places not much substance remained.”

Far from being too alarmist, these criticisms suggest that the IPCC’s summary reports are too conservative. Like Wasdell, Broome describes how “a coalition of countries led by Saudi Arabia” at the April approval session in Berlin “insisted” that all “figures” depicting increases of greenhouse gas emissions in countries classified by ‘income group’ “should be deleted.”

Saudi Arabia, he said, also “wanted to delete all references to any part of the main report that mentioned income groups… in the end Saudi Arabia got its way completely.”

According to the Sydney Morning Herald, other countries leading the drive to dilute the document included China, Brazil and the United States.

Dr Nafeez Ahmed is executive director of the Institute for Policy Research & Development and author of A User’s Guide to the Crisis of Civilisation: And How to Save It among other books. Follow him on Twitter@nafeezahmed