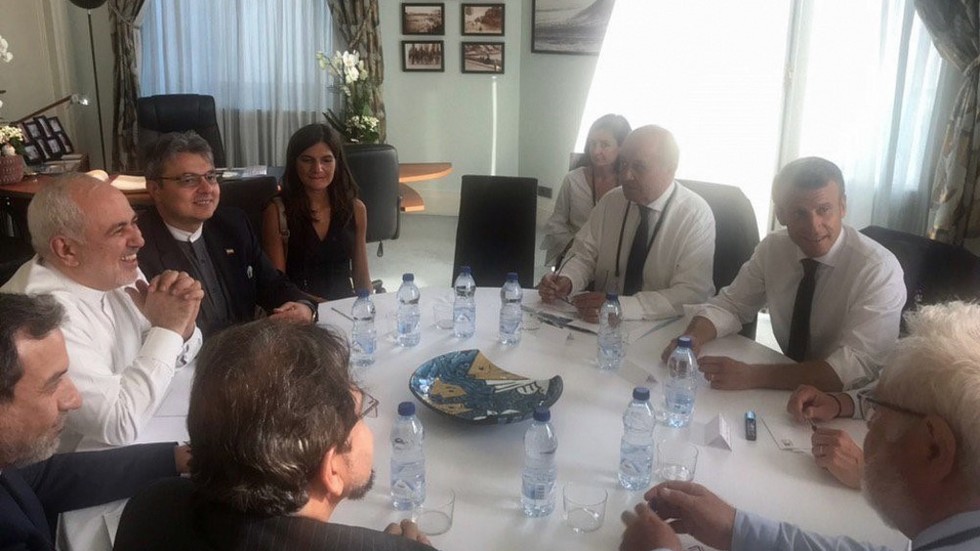 NOTE:  US news outlets reported that Trump was blindsided by the invitation to Foreign Minister Zarif made by the French Foreign Minister. Zarif arrived as fissures continued to grow among G-7 leaders over how to deal with Iran. The media is reporting confusion among G-7 leaders, Macron said the leaders agreed during a dinner the night before that the French president could serve as a G-7 messenger to Iran. Mr. Trump denied agreeing to anything. Macron later backtracked from his comment. Trump said he was happy for Paris to reach out to Tehran he would carry on with his own initiatives.

Zarif met with French officials for a three-and-a-half-hours including with President Macron for half an hour. Macron’s office said the discussions were “positive.” Macron had also hosted Zarif for talks in Paris on the eve of the summit on Friday.

The media reported “US officials said some in the administration were furious at the French government’s decision to invite Zarif to Biarritz without significant advance notice. But they could not characterize the president’s views.” The official response from President Trump was a terse “No comment.” The White House official said the Iranian minister did not meet any U.S. officials in France.

Met @EmmanuelMacron on sidelines of #G7Biarritz after extensive talks with @JY_LeDrian & Finance Min. followed by a joint briefing for UK/Germany.

Road ahead is difficult. But worth trying. pic.twitter.com/oXdACvt20T

According to Fars News, the Iranian Foreign Ministry Spokesman Seyed Abbas Mousavi wrote on Twitter before the meetings, “There won’t be any meeting or negotiations with the US delegation during this visit.” Iran has refused to negotiate with the United State unless sanctions are removed.

The Trump administration imposed sanctions on Zarif last month and limited his travel in the US when he recently came to the United Nations.. Treasury Secretary Stephen Mnuchin said at the time of the sanctions that the Iranian foreign minister “spreads the regime’s propaganda and disinformation around the world.”

Reuters reported that at the G-7 dinner, rifts emerged on the Trump trade war with China, relations with Iran and North Korea, and the most divisive issue, whether Russian President Vladimir Putin should be readmitted to the group. Russia was excluded from the G-8 in 2014 after Crimea returned to Russia.

Iran’s Foreign Minister Javad Zarif spent about five hours in Biarritz, France, at the sidelines of the G7 summit. He talked with French president Emmanuel Macron, who appeared to want to act as negotiator between Iran and the US.

The unscheduled visit at the invitation of Foreign Minister Jean-Yves Le Drian came after Zarif met President Emmanuel Marcon earlier this week to discuss the fate of the embattled nuclear agreement. Zarif did not meet with US President Donald Trump or anyone from the US delegation, an Iranian spokesman said.

#BREAKING: Iranian MFA confirms that #Iran‘s Foreign Minister @JZarif is now in G7 Biarritz at the invitation of French foreign minister; Claims Zarif will not have any meeting with American delegation

The 2015 Joint Comprehensive Plan of Action (JCPOA, or Iran Deal) all but collapsed after the US withdrew unilaterally last May, leaving Washington’s European allies struggling to maintain trade with Tehran in the face of multiple rounds of US sanctions, and with military tensions between Iran and the US flaring in the Persian Gulf.

President Macron has made restarting negotiations with Tehran a priority at this weekend’s G7 summit. Whereas Macron presented his peace plan to Trump, the US leader arrived with hawkish national security adviser John Bolton, and insisted that his “maximum pressure” campaign of economic sanctions against the Islamic Republic was working. Trump was also unaware that Zarif was coming to town and some US officials even took offense with the issue. US President Trump offered a succinct “no comment.”

This is completely disrespectful to @realDonaldTrump and the other leaders at the G7. Iran supports terrorism at every turn and continues to pursue “Death to America”. Manipulative of Macron to do this and very insincere. #NotWhatFriendsDo https://t.co/ujDe81c433

Macron’s plan reportedly involves the US lifting its oil embargo on Iran, in exchange for Iran immediately returning to compliance with the 2015 deal, and coming to the negotiating table. Zarif held over three hours of talks, including with Macron, and briefed officials from Britain and Germany.

While a French official told Reuters that the talks were “positive and will continue,” their content remains a secret.

The “road ahead is difficult,” Zarif tweeted after meeting French officials, “but worth trying.”

Met @EmmanuelMacron on sidelines of #G7Biarritz after extensive talks with @JY_LeDrian & Finance Min. followed by a joint briefing for UK/Germany.

Road ahead is difficult. But worth trying. pic.twitter.com/oXdACvt20T

German Chancellor Angela Merkel added that any talks with Zarif were a side event to the summit, and herself and her G7 counterparts would continue to “find a way to de-escalate” tensions with Tehran.

ALSO ON RT.COMTehran ready to discuss Macron’s new plan to keep Iran in nuclear deal Though it was reported that the G7 leaders had agreed to task Macron with delivering a joint statement to Iran, President Trump told reporters on Sunday that he hadn’t “discussed that.”

Divided in their approach to doing so, the G7 leaders could only agree jointly that they wanted to prevent Iran from acquiring a nuclear bomb and ensure peace and stability in the Middle East.