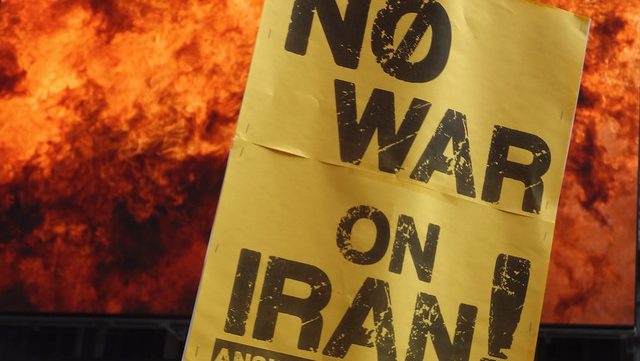 Iran, Hong Kong, And The Desperation Of A Declining U.S. Empire

The U.S. empire’s global influence projects, especially the ones in Iran and Hong Kong, have a different nature from the ones that were carried out when American power was still in a stable state. There’s now an aspect of desperation to what America is doing abroad, an unacknowledged but ever-present reality that the purveyors of Western imperialism are fighting a losing battle against the inevitable process of imperial collapse.

As the capitalist class loses its reliable means for bending global politics to its will, the foundations of capitalist markets themselves are becoming increasingly fractured. The capitalist world’s financial system, which for the last decade has been running on the same types of fraud that caused the 2008 economic crash, is due for an unraveling that all evidence says will create a depression-level downturn. Germany is already in an early stage of recession, and the slowdown in American corporate profits from recent months portends to the crisis reaching the United States.

As these events develop in relation to all of the other threats to the global capitalist order-climate change, growing class discontent from the world’s poor and working people, civil unrest and refugee crises-the reaction from the ruling class is to step up the U.S./NATO empire’s military expansionism and propaganda.

There’s a term that historians use for this reactive phase that empires go through during their final years: micro-militarism. In the cases of Iran and Hong Kong, America’s micro-militarism is on display in ways that are different but revealing.

The U.S. empire’s losing battle against Iran (and against the other anti-imperialist countries)

America’s campaign against Iran is motivated by the desire to reverse Iran’s process of abandoning the dollar as a means for international exchange. Since Iran made this shift away from the dollar, it’s been targeted with economic warfare and with bogus accusations of rogue nuclear development and support for terrorism. Yet America’s political establishment continues to almost unanimously dislike the idea of starting an outright war with Iran.

Washington still hasn’t invaded Iran both because doing so could create a war so gigantic that it would make it necessary to bring back the draft, and because the American public still overwhelmingly hates the idea of a war with Iran. A Gallup poll from last month stated that 8 in 10 Americans favor nonmilitary methods for stopping Iran from getting nuclear weapons. The Trump administration’s effort this week to blame Iran for the bombing of a Saudi petroleum facility (a bombing which Houthi fighters have claimed responsibility for) isn’t going to sway the public to view Iran otherwise. The Trump White House is losing the narrative battle over Iran, and Trump’s handlers in the deep state don’t want war with Iran to start because they know that it would cause far too much backlash from the populace.

Iran has become an obstacle that the U.S. isn’t able to overcome. A war with Iran would undoubtedly be the crisis that makes this fragile empire implode; the U.S. would have to face up against a militarily mighty enemy in this scenario, and the American public would quickly turn against the war machine on the same level as what happened during the anti-Vietnam War movement. So the U.S. has lost Iran as an economic and political asset for the foreseeable future, just as it’s so far failed to achieve regime change in Cuba, Nicaragua, Venezuela, Syria, North Korea, Russia, and China. The U.S. would of course lose if it were to try to overthrow all of these governments through military invasion.

Amid this piling up of losses in the game of empire, the members of the neoconservative political and media class have attempted plans for overthrowing these countries through approaches other than directly invading them. Naturally, the method of trying to overthrow governments by supporting opposition groups within the target countries has become unusually prevalent in U.S. operations in the last decade.

In 2017, National Council of Resistance of Iran associate Ali Safavi wrote a column titled “Regime change in Iran does not equal war in Iran,” which advocated for this approach. Despite the sensible veneer that Safavi intended to integrate into the column, it was clearly meant to be a propaganda piece for the People’s Mujahedin of Iran (or the MEK), a violent and cult-like organization that was at one point labeled as a terrorist group by the U.S. government. This is apparent from the fact that the latest tweet on Safavi’s Twitter profile is an endorsement of the MEK, and from the fact that the MEK has allies in Washington.

But just as this year’s attempted Venezuela coup has failed to gain enough support from within Venezuela’s military, as Nicaragua’s Sandinista government has prevailed amid U.S. operations to sow unrest in the country, and as Assad has defeated the U.S.-backed insurrectionary forces in Syria, the MEK’s plans for manufactured revolution within Iran are far from being realized.

The U.S. is just as far from carrying out such a regime change operation in China, where the strongest contingent of U.S.-backed anti-China activism exists on an island that’s not controlled by the Chinese government.

Hong Kong is a holdout from Western colonialism whose time of separation from Chinese authority is running out the clock. In 2047, Hong Kong will become controlled by the Chinese Communist Party, ending the domination by Western capitalist interests that now exists within the city. The Hong Kong protests, which are taking place through support from American destabilization networks and are using China as a scapegoat for Hong Kong’s problems, are the tool that the West is using to try to secure control over Hong Kong.

What’s strange is that this Western effort towards recolonizing Hong Kong is being undertaken when there are still decades before the 2047 expiration date will become an issue at hand. What is the West trying to accomplish by initiating this struggle at a time when Hong Kong isn’t in the process of being absorbed by China?

There are two facets to the West’s motives. One, the U.S. is now waging an intensifying cold war against China, and promoting the “pro-democracy” anti-Beijing Hong Kong protests is a perfect opportunity for creating anti-Chinese propaganda. Second, this seemingly untimely Western intervention in Hong Kong is part of the process of micro-militarism. The Western imperialists, seeing their influence wane throughout the globe, want to create a new American proxy state in Hong Kong. This way, Hong Kong won’t be lost to China in 2047.

Yet not even this attempt to fortify Western control over one little island is proving to be an effective endeavor for the empire. A top adviser to Hong Kong’s leader Carrie Lam said this week that the Hong Kong government doesn’t see any benefit to conceding to more of the demands from the protesters, meaning the U.S. and the right-wing protesters it supports won’t get their wish of overthrowing the island’s government. It now appears that the protests will fruitlessly continue, and that their increasingly violent nature will make it harder for the Western propaganda machine to manufacture support for them.

As the U.S. hits this dead end in Hong Kong, the fantasies from the Western neoconservative class of destroying the Chinese government look hilariously detached from any realistic projections of China’s future. Last month Joseph Bosco, a former senior fellow in the Asia-Pacific Program at the Atlantic Council, wrote a column titled “China’s happy future: One system, six countries.” Bosco’s prediction was based in his oddly specific estimate that “the lifespan of a major communist power is about seven decades,” and in his belief that the Chinese people are by and large on the verge of turning against their government and carrying out a drastic geopolitical split.

According to this narrative, Hong Kong is ground zero for the imminent nationwide uprising against the Chinese Communist Party. Yet Hong Kong’s anti-Beijing protests, which depend on U.S. backing, have been countered with massive pro-China protests within Hong Kong. And despite all of the assertions to the contrary from Western propagandists like Bosco, most Chinese people in the mainland also support the CCP. “Why do so many people feel that the Chinese can’t possibly be OK with their government or society?” reflects the essayist Kaiser Kuo in an analysis from this year about why the Chinese like their current political and economic system. “It seems that many in [the] West deem the current Chinese government/society as wrong and that any ‘right-thinking’ person would agree and join in the fight.”

The cause of this Western blindspot is imperial hubris mixed with a growing mentality of micro-militarism. At this stage the U.S. can’t even conquer tiny Hong Kong, at least not without militarily intervening in the island. And despite the calls from the fanatical pro-colonial protesters for Trump to “free Hong Kong,” Washington knows that such an invasion would be insane. So all that the Yankees can do is cheer on their hopeless regime change projects in Hong Kong and elsewhere, and engage in grand fantasies about new global conquests being just around the corner.

Imperial collapse and the turning tide of the class war

The purportedly socialist supporters of the Hong Kong protests have claimed that the people of Hong Kong are rightly rebelling against the policies of China, and that the CCP has engineered the island’s crisis of social inequality. In fact, China is a relatively small economic player within Hong Kong, and Hong Kong most definitely wouldn’t have its unjust neoliberal system if China were to have substantial policy control over the island. The Deng system and Xi Jinping’s Socialism with Chinese Characteristics have brought unparalleled increases in prosperity to China’s proletariat. China has lifted 800 million people out of poverty since the start of its economic form, and China‘s life expectancy has gone up by 42 years since communism was established in the country. China continues to be guided by the principles of Marxist Leninism, and all socialists around the globe should support it.

While many Western leftists claim otherwise, the protests against China are an attack against socialism. China, as well as its socialist supporters within Hong Kong, are what can bring Hong Kong out of its corporatist paradigm in the decades ahead.

“The conflict in Hong Kong is in fact a microcosm of the one the world will be facing in the decades ahead,” the socialist Thomas Hon Wing Polin has written. “Led by the United States, the Western Empire is pushing countries to choose between itself and China — the Western way or the Chinese way. That is not a choice Beijing is obliging anyone to make, however. Alert, forward-looking individuals and nations can see that the predatory, zero-sum paradigm of the Western Empire is headed for the dustbin of history. For Hong Kong as for all humanity, the only viable way forward in the 21st century is peace, mutual understanding and cooperation, and win-win. China is blazing that particular path.”

Now that the Chinese side has achieved victory in Hong Kong, this micro-version of the world’s future portends to a worldwide defeat for the capitalist class. Our Chinese comrades in the global class struggle have shown us the correct route for defeating the capitalists, which is Marxist Leninism. The Western capitalist empire has demonstrated its growing weakness through its international defeats, as well as through its inability to prevent economic crisis and social instability. Now is the time for the global proletariat to strike back against the empire and win the fight for a socialist world.