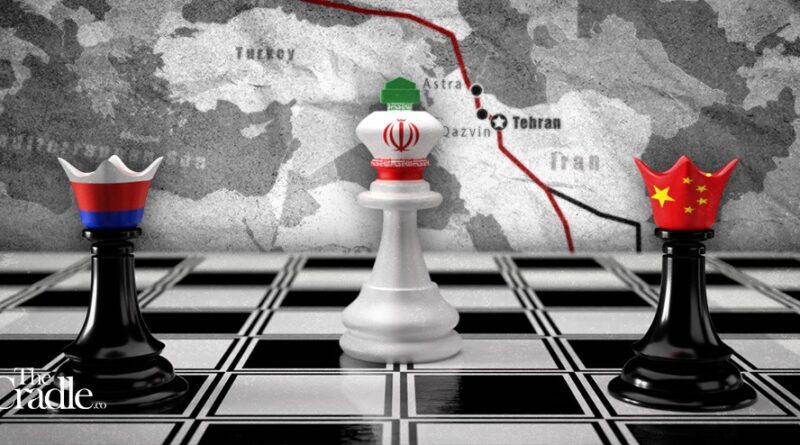 Iran Is Spearheading A Geopolitical Sea Change In West Asia

While the west bangs on about Vienna talks, sanctions and military options, Iran has been quietly building a vast network of alternative solutions to cement its Asian ascent.

Benjamin Franklin once famously wrote to his fellow colonials: “Either we hang together or we hang separately.”

Those words are just as true today as they were 270 years ago, for empires have always controlled by dividing their victims into regional tribal interests in order to be better conquered.

While techniques have adapted to modern times, the essential ingredients for the science of discord remain relatively unchanged: keep resources scarce, fear and ignorance high, and let a targeted population clash over diminishing returns of scarcity.

Amid this division, myopic ethnic, religious, and linguistic prejudices have fertile soil to grow to the benefit of an oligarchic elite.

Today’s Americans, sitting as they are on the precipice of a their own internal civil clashes, and economic collapse more broadly, have not heeded the advice of their own founding fathers well enough.

However, it is no small irony that Ben Franklin’s advice is being taken to heart in another part of the world far removed from the decaying republic.

Since Iran finalized its Comprehensive 25 Year Cooperation Plan with China on 27 March, a completely new geometry has arisen in Southwest Asia, which is evolving at breakneck speed.

An ancient civilization serving as the third foundational pillar supporting the Greater Eurasian Partnership, and  the Shanghai Cooperation Organization (SCO) on 17 September, Iran has finally emerged as a leading driver for stabilization and progress.

Alongside security agreements with Russia that have seen the two nations conducting Indian Ocean military drills in February 2021, Russia, Iran and China (RIC) have also  parties would hold joint naval drills in the Persian Gulf by the start of 2022.

Russian-Iran relations don’t end here, but  – modelled on the Iran-China agreement – between the two powers is also in the final stages of negotiation.

Iranian foreign ministry spokesman Saeed Khatibzadeh stated on 11 December: “Like the 25-year cooperation roadmap we developed with China, we can do the same with major neighboring countries.”

Among the many impossibilities now becoming possible under this new system, the Iranian-led , which many thought was long dead, has in 2016 has come back to life with force.

This transformative corridor is an obvious synergistic component to the China-led east-west Belt and Road Initiative, and Russian-Indian led International North South Transportation Corridor, both of which are sweeping across the world island.

At the November 28 Economic Cooperation Organization (ECO) summit in Ashgabat, the leaders of Azerbaijan, Iran and Turkmenistan overcame immense hurdles by finalizing an important gas swap deal that will involve Iran receiving two billion cubic meters of gas per year from Turkmenistan, which it will also send in equal proportions to Azerbaijan.

This agreement broke through the five-year block on gas relations between Turkmenistan and Iran, which had collapsed in 2016 due to complaints over unpaid oil from over a decade earlier. Additionally,  which many commentators were warning might break out just a few months ago between Azerbaijan and Iran makes the agreement for renewed cooperation between the two nations that much more important.

Iranian president Raisi alluded to the foreign interests that were provoking fires during that heated period saying: “We must never allow others to interfere in our relations. We must resolve our own problems, work together to advance our relations and deepen mutually beneficial cooperation. Experience so far shows that when we discuss our issues ourselves, we manage to resolve many of them.” 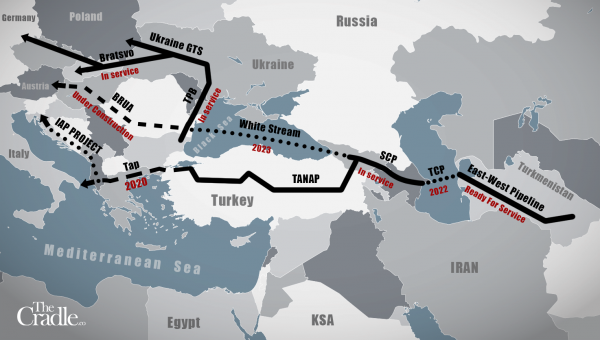 The three nations also agreed to deepen integration and cooperation in transportation, trade, shipping, tourism and, most importantly, the development of the incredibly bountiful offshore oil and gas resources within the Caspian Sea.

While southern Iran holds the world’s second largest oil and natural gas reserves (behind Russia, who sits at #1), Turkmenistan is 4th on the list, while offshore deposits in the Caspian Sea represent some of the largest in the world.

As Pepe Escobar has observed in his recent contribution to The Cradle, the Chalous Gas fields in the Caspian not only represent the tenth largest reserves in the world with a $5.4 trillion value but, according to experts, this region alone could service 52 percent of Europe’s natural gas needs for 20 years. As of this writing, agreements have been signed, which will see this region developed by Russian, Chinese and Iranian interests.

The long overdue 300 km Trans Caspian Pipeline (TCP) crossing the Caspian has also come much closer to being realized alongside this harmonization of interests. With its completion in 2022, the TCP will connect to the Southern Gas Corridor and Turkey’s TANAP.

The final branch to Europe via the Nabucco gas pipeline will easily be completed (if political sabotage is avoided), providing Europe with abundant gas for generations. This will give both Iran and Russia a position of vast economic leverage with a mismanaged Europe now experiencing one of the worst man-made energy crises in history.

The INSTC as a game changer 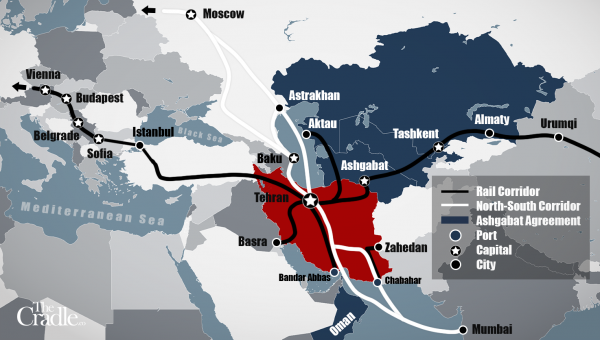 Since the ECO summit, a plethora of agreements have been signed to accelerate this megaproject as well. While many talking heads have tried hard to paint this 20-year-old project as a Russian competitive challenge to China’s BRI, it is increasingly obvious that the two projects are entirely harmonious.

On 28 November, a three-way Iran-Kazakhstan-Turkmenistan  was signed to build a new railway which will add to the 917 km railway from Ozen (in Kazakhstan) to Gorgan (in Iran) via Turkmenistan that began in 2014 and which was funded primarily by the three powers.

Another agreement was signed on 10 December to create an Iran-Azerbaijan-Georgia  connecting the Persian Gulf with the Black Sea to be completed in March 2022.

Once built, this new route will allow goods to move from Iran’s southern ports to Europe and Central Europe directly over land.

Reporting on this development, the  that “effectively combining the capacity of all three would allow Iran to connect the Oman Sea and the Gulf to the south, Afghanistan and Pakistan to the east, Central Asia to the northeast and the Caucasus to the northwest.” 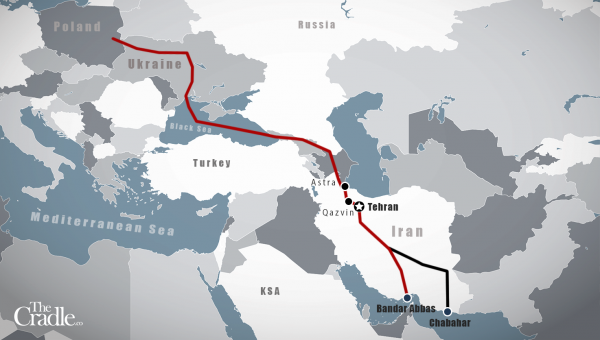 On 12 November, Iranian, Turkish and UAE leaders signed a new  to start work on a new transportation corridor between the three nations with goods arriving from the UAE to Iran’s Port Shahid Rajaee, then transported over land to Turkey and thence to Europe, cutting eight days off  conventional sea routes.

This is all part of the broader INSTC  saw the first cargo arriving to India via Iran from Finland.

In addition to building new transport and energy grids between the historic rivals, the leaders of Turkey and Iran signed a strategic security agreement on 21 October with Iran’s Interior Minister Vahidi saying: “Iran-Turkey ties will speed up. The two states will together end regional instability and foil enemy plots. The two countries will not allow others to disrupt their relations.”

One month later, Vahidi’s sentiments were amplified by Prime Minister Erdogan who held a alongside Raisi saying: “The White House is training and arming all terrorist groups in the region, including ISIS and the PKK, and providing them with terrorist equipment and tools to create insecurity.”

The two leaders not only signed security cooperation agreements to fight foreign-sponsored terrorism, but also advanced plans for a new free trade zone with preferential tariffs for all regional nations.

No longer do the promises of western backers appear as attractive as they did a decade ago, especially considering the speed of economic disintegration of the  known as the Trans-Atlantic economy.

In this spirit of simply wanting to survive if nothing else, the UAE has not only suspended US military deals, unveiled regional transport hubs, and advanced frontier scientific investments in space and atomic power. Additionally, we have also seen Iran and the UAE agreeing to “open a new page in Iran-UAE relations.”

On 6 December, Iran’s President met with the UAE’s National Security in Tehran saying: “the security of the countries in the region is intertwined and Iran supports the Persian Gulf littoral states. There should be no obstacle in the relations between the two Muslim countries of Iran and the UAE, and these relations must not be influenced by outsiders.”

While the west is busy sabre-rattling, imposing unilateral sanctions and virtue signaling their rules-based superiority, the world has moved ahead towards a new multipolar system premised on genuine cooperation.

Based on this positive momentum, it is only a matter of time before the Economic Cooperation Organization fully incorporates into the Russian-led Eurasian Economic Union (EAEU) which itself has already integrated deeply into .

As it stands the long-awaited  is on the cusp of being finalized and this watershed will create many potentials for an expanded power bloc.

As Iranian MP Mohsen Zanganeh stated: “I think that if we focus our attention on Eastern countries, especially those in Central Asia, East Asia, as well as Eastern Europe, instead of focusing on the West, we can definitely benefit from their considerable economic potential… As you are aware, we are facing a lot of challenges in interacting with Western countries, because of the United States and Israel’s attitudes toward Iran. But the same challenges don’t exist in our ties with Eastern nations. That creates a great opportunity for our economy.”

With this new set of relationships in place, a chance at Syrian reconstruction has emerged with Iran and Iraq building the first railway connecting both nations in the form of the Shalamcheh-Basra railway.

If the 2018 Iraq-Iran Provisional Agreement is also revived, then this small railway can be extended 1,570 km through Iraq to Syria’s Latakia Port and Lebanon as a southern corridor for the New Silk Road. Syria’s return to the Arab League in the coming months makes this project much easier to achieve.

Despite the fact that old imperial habits die hard, there is obviously a new game in town, and anyone who wants to have a future should come to the recognition that they must learn to play by a new set of rules. These are rules which reject regime changes, divide-to-conquer tactics, or zero-sum thinking.

Much more in alignment with natural law, the Greater Eurasian Partnership is driven by win-win cooperation and building up the powers of productivity within a community of sovereign nation states.

Where one paradigm is unipolar, the other is multipolar; and where one is premised on extracting wealth from a fixed set of resources in order to get nations to fight for scraps, the other creates new wealth while harmonizing diverse interests into a greater whole. Which one would you rather live in?