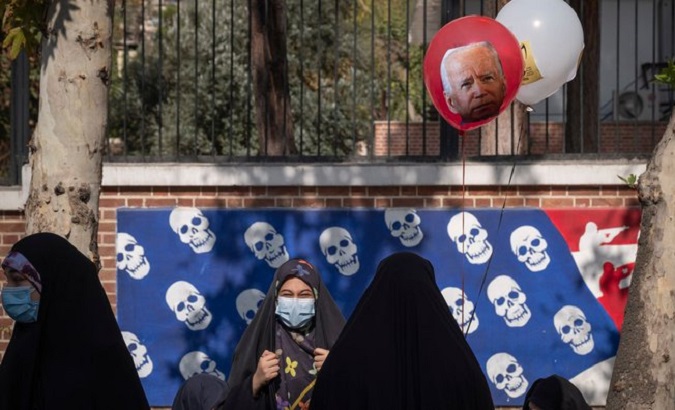 Iran Says US Responsible For Halt In Vienna Nuclear Talks

Above Photo: A Ceremony To Mark The Anniversary Of The Seizure Of The U.S. Embassy In Tehran, 2021. | Twitter / @JComm_NewsFeeds.

“If The U.S. Makes A Political Decision, An Agreement Is Available,” Said Iranian Diplomat Khatibzade.

On Monday, Iranian Foreign Ministry spokesman Saeed Khatibzadeh said that the United States is responsible for the halt in Vienna talks aimed at reviving the 2015 nuclear deal, formally known as the Joint Comprehensive Plan of Action (JCPOA).

Iran has transmitted its “clear” message to the United States through Enrique Mora, the European Union coordinator for the Vienna talks, but no new response has been received from them yet.

On Sunday, Iranian Foreign Minister Hossein Amir Abdollahian said Iran has submitted its proposals concerning the remaining unresolved issues to the U.S. through Enrique Mora and now the ball is in the U.S. court.

Iran signed the JCPOA with the world powers in July 2015. However, former President Donald Trump pulled the Washington out of the agreement in May 2018 and reimposed unilateral sanctions on Tehran, prompting the latter to drop part of its nuclear commitments.

Since April 2021, eight rounds of talks have been held in Vienna between Iran and the remaining JCPOA parties, namely China, Russia, Britain, France and Germany, to revive the deal.

Over the past weeks, reports from Vienna suggested that the negotiators were “close” to an agreement but a few key issues remain unsolved pending “political decisions” of the parties.