Iran Wants Peace. Will The US Allow Peace With Iran?

We just returned from nine days in Iran with a 28-person peace delegation organized by CODE PINK. It is clear that people in Iran want two things:

The path to those goals requires the United States to change its policies toward Iran as the US has a long history of interference in Iranian politics with disastrous results. The US must stop its belligerence and engage in honest, respectful dialogue with the government of Iran.

One of the highlights of the trip was a visit to the Tehran Peace Museum. On the way to the Peace Museum, we passed the site of the former US Embassy, now called the “US Den of Espionage Museum.” This was where the US ruled Iran through the Shah until the Islamic Revolution of 1979. The US installed the brutal Shah as a dictator after it worked with Great Britain to overthrow the democratically elected Prime Minister Mohammad Mosaddegh in 1953 in a coup that was one of the greatest foreign policy mistakes of US history. 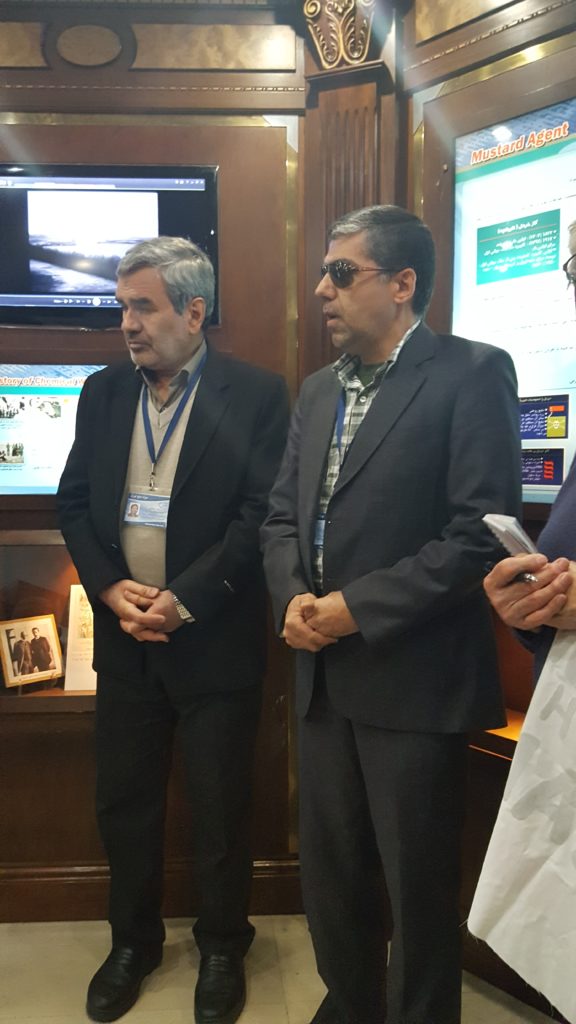 At the Peace Museum, we were welcomed by the director, a veteran of the Iraq-Iran War, which lasted from 1980 to 1988 and given a tour of the museum by two other veterans. The war, which began shortly after the Iranian Revolution in 1979, would not have been possible without US encouragement and support in the form of money, naval assistance and weapons. More than one million people were killed and 80,000 people were injured by chemical weapons in that war.

Two of our tour guides had been victims of a chemical attack and they still suffer from the exposure. One was injured by mustard gas, which impacts the nerves, eyes, and lungs. Eye drop medications are not available because of the US sanctions; so this veteran uses onions to make himself cry tears to alleviate the symptoms. Listening to his persistent coughing, we felt ashamed that the US both provided Iraq with the ingredients needed for the chemical weapons and now punishes people further by sanctions that deny essential medicines. 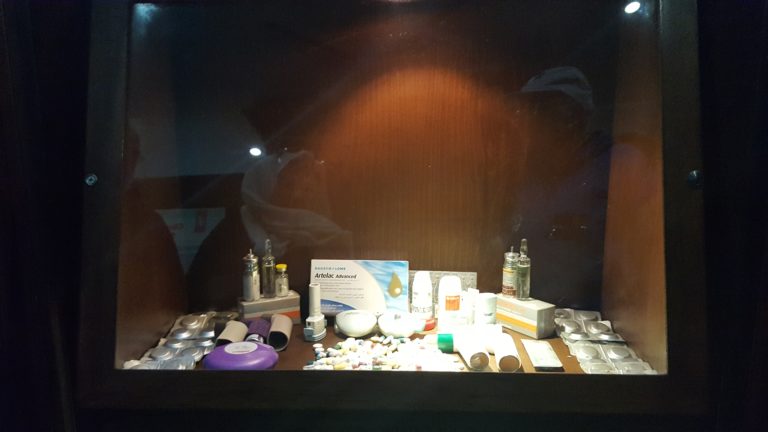 At the Peace Museum, our delegation gave the museum books on war and peace activism. One gift was a beautiful, hand made book by Barbara Briggs-Letson of California that was written in memory of the 289 Iranians killed when a US missile shot down a commercial Iranian airliner in July 1988. The entire Peace Delegation signed the book and made statements of remorse. The book contained the names of every person killed written in Farsi as well as Iranian poetry. Fmr. President George H.W. Bush is infamous for saying, “I will never apologize for the United States — I don’t care what the facts are… I’m not an apologize-for-America kind of guy,” so our delegation apologized. 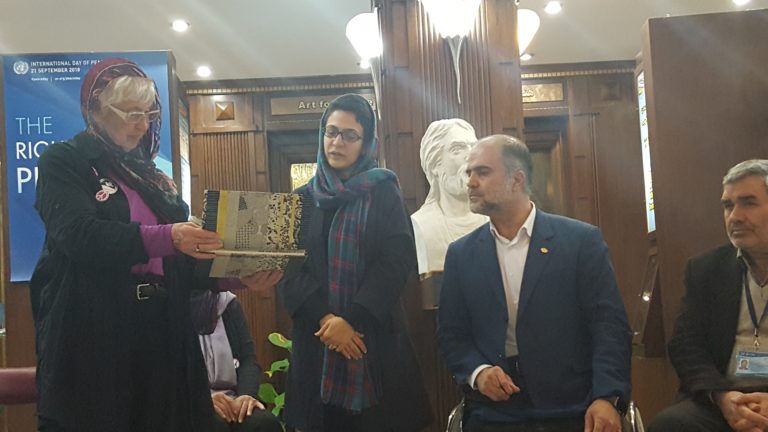 Iran book on civilian airline bombing given to Peace Museum

Led by Sandy Rea, we sang Dona nobis pacem (Latin for “Grant us peace”). This brought the room together sharing powerful emotions calling for peace, with tears and hugs between the Peace Delegation and the Iranians who run the Tehran Peace Museum.

The delegation next visited the largest cemetery in Tehran where tens of thousands of Iranians are buried. We visited a section of several thousand who were killed in the Iraq-Iran War, all known as martyrs. The graves contained headstones, many with etched photographs of the war dead and information about their lives. They also contained the wish or lesson they had for others noted in a small booklet the soldier created to be shared in the event of death. There was a section for the unknown soldiers killed in the war and one for civilian casualties –mostly innocent women and children killed in the war.

The cemetery was filled with people visiting gravesites of loved ones from the war. One woman approached the group to tell us that her only son died at twenty years of age in the war and she visits his grave every day. A guide who was traveling with us told us every family in Iran has been impacted by this war. 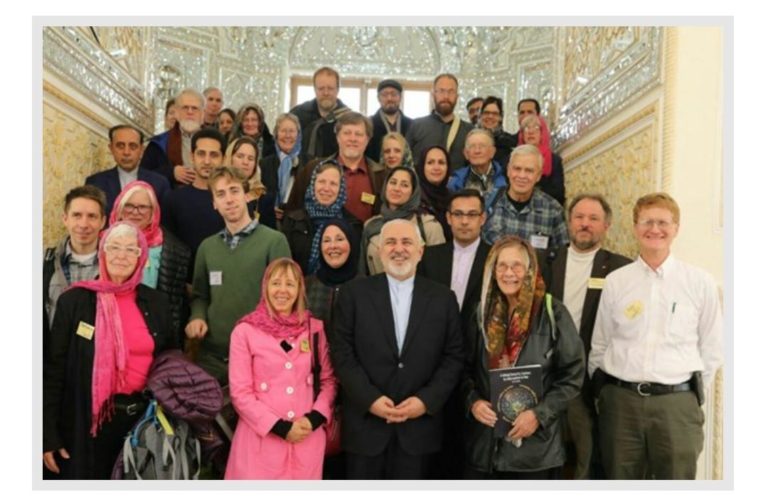 A highlight of the trip was an extraordinary meeting with Iran’s Foreign Minister Mohammad Javad Zarif, who painstakingly negotiated the 2015 Iran Nuclear Deal, the Joint Comprehensive Plan of Action (JCPOA) negotiated between China, France, Russia, the United Kingdom, and the United States plus Germany and the European Union and Iran for more than a decade. He explained that negotiations began in 2005 and were completed and signed in 2015. Iran complied with all the requirements of the agreement, but the US did not lift sanctions, as promised, and exited the deal under President Trump.

Zarif, a long-time diplomat holding many important roles in Iranian affairs, was very generous with his time spending 90 minutes with us. He first asked us to speak about what questions we had, then spoke for 60 minutes and answered more questions. 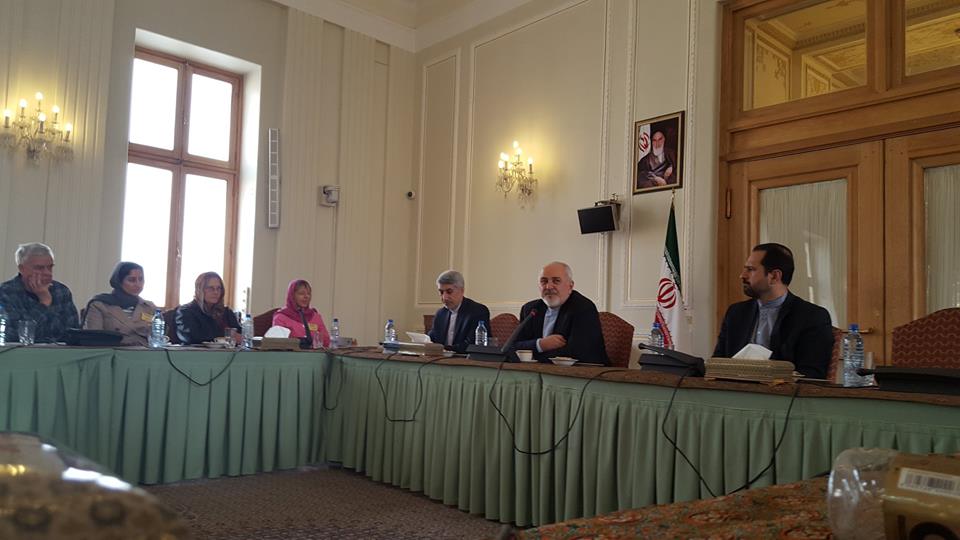 Zarif explained the root cause of the problems between the United States and Iran. It is not about oil, Iran’s form of government or even about nuclear weapons, it is about Iran’s 1979 revolution which made the country independent of US empire after being under its control since the 1953 coup. Iran wants to be respected as a sovereign nation that decides its own domestic and foreign policy, not dominated by the United States. If the US can respect the sovereignty of Iran as a nation, then there will be peace between our nations. If the US insists on domination, the conflict will continue threatening the security of the region and undermining peace and prosperity for both nations.

It is up to us. Even though US “democracy” offers the people of the United States limited power, as we are forced to choose between two parties funded by Wall Street and both supporting a militarist foreign policy, we need to impact our government so it stops threatening nations, undermining their economies with illegal sanctions, and respects people of the world. Iran shows us the urgency of becoming a world beyond war.