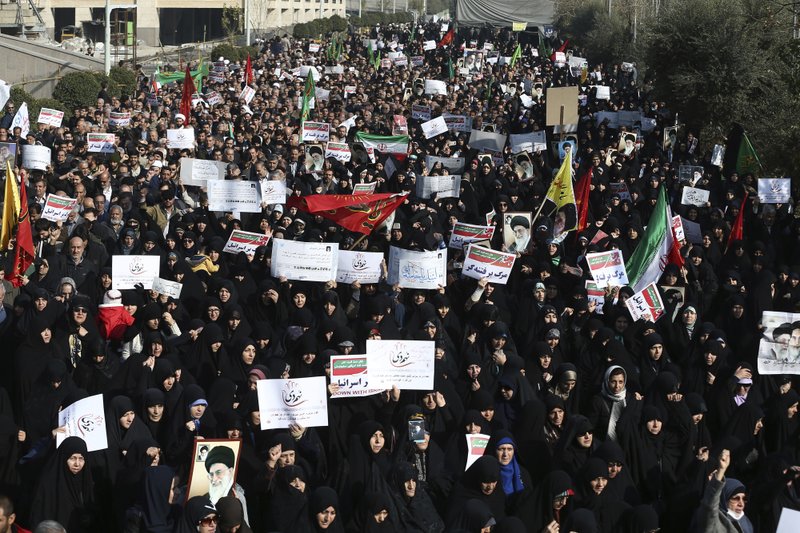 Iranian Protests Part Of Regime Change Campaign By US & Israel?

Note: When we first saw reports of the “spontaneous” Iranian protests, we wondered whether the United States was engaging in regime change once again in Iran. We still do not know, but it raised suspicions when the protesters moved from rising prices at home to foreign policy issues on which the United States is in conflict with Iran. We will keep watching for reports on these protests to further gauge whether these are organic protests or whether they are being manipulated by foreign powers. The article below puts forth the argument that the United States and Israel are working together to use these protests to create regime change in Iran. KZ

Yesterday and today saw some small protests in Iran. They are probably the first stage of a large “regime change” operation run by the U.S. and Israel with the help of Iranian terrorist group.

Earlier this month the White House and the Zionist prepared for a new assault on Iran:

A delegation led by Israel’s National Security Adviser met with senior American officials in the White House earlier this month for a joint discussion on strategy to counter Iran’s aggression in the Middle East, a senior U.S. official confirmed to Haaretz.

Another report about the meeting quotes Israeli officials on the result:

“[T]he U.S. and Israel see eye to eye the different developments in the region and especially those that are connected to Iran. We reached at understandings regarding the strategy and the policy needed to counter Iran. Our understandings deal with the overall strategy but also with concrete goals, way of action and the means which need to be used to get obtain those goals.“

This is probably a result of the above meeting:

Hundreds took to the streets of Iran’s second largest city of Mashad on Thursday to protest over high prices, shouting slogans against the government.Videos posted on social media showed demonstrators in Mashad in northwest Iran, one of the holiest places in Shia Islam, chanting “death to (President Hassan) Rouhani” and “death to the dictator”.

The semi-official ILNA news agency and social media reported demonstrations in other cities in Razavi Khorasan Province, including Neyshabour and Kashmar.

A video of that protest in Mashad showed some 50 people chanting slogans with more bystander just milling around.

Protests against the (neo-)liberal economic policies of the Rohani government in Iran are justified. Official unemployment in Iran is above 12% and there is hardly any economic growth. The people in the streets are not the only ones who are dissatisfied with this:

Iran’s Supreme Leader Ayatollah Ali Khamenei, who has repeatedly criticized the government’s economic record, said on Wednesday that the nation was struggling with “high prices, inflation and recession”, and asked officials to resolve the problems with determination.

On Thursday and today the slogans of some protesters turned the call for economic relief into a call for regime change.

My hunch is that the usual suspects are behind these protests. Note that these started in several cities at the same time. This was not some spontaneous local uproar in one city but had some form of coordination.

Then there is this:

A search in various languages finds exactly zero such “reports”. Carl Bildt is a former Swedish prime minister. He was recruited in 1973 as a CIA informant and has since grown into a full blown U.S. asset. He was involved in the Ukraine coup and tried to personally profit from it.

The only response to Bildt’s tweet was from one Riyad Swed‏ – @SwedRiyad who posted several videos of protests with one of them showing burning police cars.

I am not sure the video is genuine. The account has some unusual attributes (active since September 2016, 655 tweets but only 32 followers?).

Just yesterday one lecture at the CCC “hacker” congress was about the British GHCQ Secret Service and its sock-puppet accounts on Twitter and Facebook. These are used for acquiring human intelligence and for running “regime change” operations. Page 14-18 of the slides (11:20 min) cite from obtained GCHQ papers which lists Iran as one of the targets. The speaker specifically notes a GCHQ account “@2009Iranfree” which was used in generating the protests in Iran after the reelection of then President Ahmedinejad.

Today, Friday and the weekly day off in Iran, several more protest took place in other cities. A Reuters reportfrom today:

About 300 demonstrators gathered in Kermanshah after what Fars called a “call by the anti-revolution” and shouted “Political prisoners should be freed” and “Freedom or death”, while destroying some public property. Fars did not name any opposition groups.
…
Footage, which could not be verified, showed protests in other cities including Sari and Rasht in the north, Qom south of Tehran, and Hamadan in the west.Mohsen Nasj Hamadani, deputy security chief in Tehran province, said about 50 people had rallied in a Tehran square and most left after being asked by police, but a few who refused were “temporarily detained”, the ILNA news agency reported.

Some of these protests have genuine economic reasons but get hijacked by other interests:

In the central city of Isfahan, a resident said protesters joined a rally held by factory workers demanding back wages.“The slogans quickly changed from the economy to those against (President Hassan) Rouhani and the Supreme Leader (Ayatollah Ali Khamenei),” the resident said by telephone.
…
Purely political protests are rare in Iran […] but demonstrations are often held by workers over layoffs or non-payment of salaries and people who hold deposits in non-regulated, bankrupt financial institutions.
…
Alamolhoda, the representative of Ayatollah Khamenei in northeastern Mashhad, said a few people had taken advantage of Thursday’s protests against rising prices to chant slogans against Iran’s role in regional conflicts.
…
“Some people had came to express their demands, but suddenly, in a crowd of hundreds, a small group that did not exceed 50 shouted deviant and horrendous slogans such as ‘Let go of Palestine’, ‘Not Gaza, not Lebanon, I’d give my life (only) for Iran’,” Alamolhoda said.

Two videos posted by BBC Persian and others I have seen show only small active protest groups with a dozen or so people while many more are just standing by or film the people who are chanting slogans.

Videos published by the terrorist group Mujahedin-e Khalq [MEK], 1, 2, 3, 4, 5, also show mostly small protests despite the MEK’s claim of Tens of thousands of people chant “death to dictator”. The MEK, or its “civilian” organization National Council of Resistance of Iran , seem to be most involved in the current protests. Its website is currently filled with the protest issue with a total of ten reports and its head figure issued a supportive statement:

Mrs. Maryam Rajavi, President-elect of the Iranian Resistance, saluted the heroic people of Kermanshah and other cities who rose up today chanting “death or freedom”, “death to Rouhani”, “death to the dictator”, and “political prisoners must be freed”, and protested against high prices, poverty and corruption.She said, “Yesterday Mashhad, today Kermanshah, and tomorrow throughout Iran; this uprising has tolled the death knell for the overthrow of the totally corrupt dictatorship of the mullahs, and is the rise of democracy, justice and popular sovereignty.

This very early engagement of the MEK -its first report was published yesterday at 10:26 am- is extremely suspicious.

In 2012 it was reported that Israel had used the MEK terrorist organization to assassinate nuclear scientists in Iran:

On Thursday, U.S. officials speaking to NBC news claimed that Mossad agents were training members of the dissident terror group People’s Mujahedin of Iran in order assassinate Iranian nuclear scientists, adding that the administration of U.S. President Barack Obama was aware of the operation, but had no direct link to them.The U.S. officials reportedly confirmed the link between Israel and the People’s Mujahedin of Iran (MEK), with one official saying: “All your inclinations are correct.”

In October a CATO Institute paper analyzed (and rejected) several options for U.S. handling Iran. Under Option Three: “Regime Change from Within” it noted:

In this approach, the United States would pressure the Iranian regime and simultaneously back groups that oppose it-whether the exiled extremist National Council of Resistance of Iran (NCRI), pro-democracy Green Revolution factions, or ethnic minorities within Iran-a strategy advocates often compare to Reagan’s support for civil society groups in the Soviet Union.
…
[A] proponent of “coerced democratization,” the Foundation for Defense of Democracies’ Mark Dubowitz, urged President Trump to “go on the offensive against the Iranian regime” by “weakening the Iranian regime’s finances” through “massive economic sanctions,” while also “undermin[ing] Iran’s rulers by strengthening pro-democracy forces” inside Iran. This option appears to be gaining traction in the Trump administration’s ongoing Iran policy review and has received public support from Tillerson. CIA Director Mike Pompeo also favored such an approach during his time in Congress.

The MEK/NCRI noted that Senator Tom Cotton, who will likely replace CIA chief Pompeo when Pompeo moves to the State Department, issued a supportive statement for the protests.

The White House and the Netanyahoo regime agreed on a strategy towards Iran. Major members of the Trump administration are in favor of “regime change” by “pro-democracy forces” in Iran. A few weeks after an agreement was found, coordinated economic protests start in Iran which are soon hijacked by small groups of very active regime changers. A group of Iranian exile terrorists, well known for deadly collaboration with Israeli spies as well as for having operation cells in Iran, is highly engaged in the protest from very early on.

If this the “regime change” operation I presume, the protests will soon get bigger. When the people need money a few thousand dollars are enough to create a large crowd. Small groups will riot while hiding within the larger protests of maybe genuinely concerned people. The “western” media will engage with their usual pseudo liberal humanism and concern trolling. When the police in Iran tries to arrest those rioters who are raising havoc the media will scream “brutality”. Some “martyr” will be created and iconified. Rumors of censorship and suppression will be raised (see Carl Bildt above), fake news will come from everywhere and hundreds of sock puppet Twitter and Facebook accounts will suddenly be “Iranian” and breathlessly report “from the scene” of their Langley offices.

For the Iranian politicians and police the issue is tricky. Economic protests are clearly justified with even Khameni voicing support for the issue. But rioting in the streets must be suppressed before it further escalates and becomes uncontrollable. Weapons on the protesters site firing in all directions may soon become a problem. The Mossad and the MEK are not shy of killing random people.

But the Islamic Republic in Iran has genuine support in large parts of the society. There are big civil organizations that support the government – not on every issue but in its general framework. Most Iranian’s are proud nationalists and will be difficult to divide. If this is indeed the “regime change” attempt I suspect, I predict that it will fail.