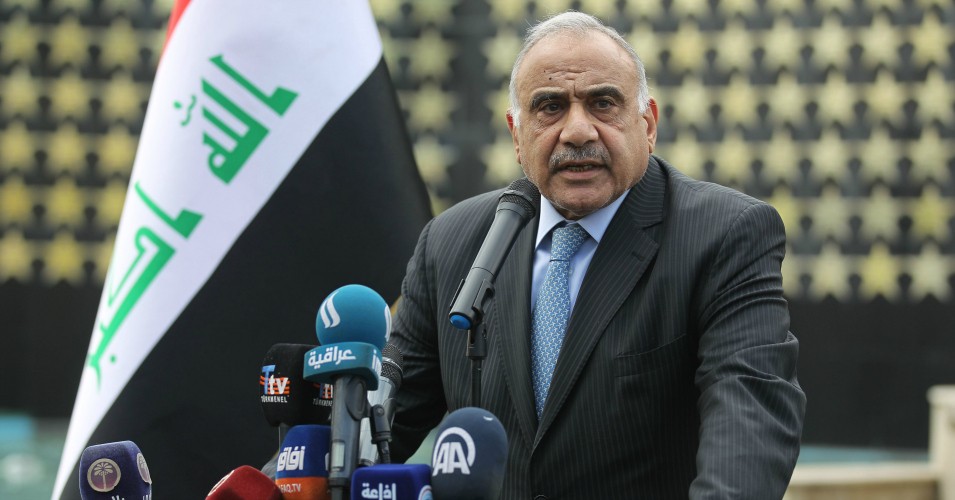 Above: Iraq’s Prime Minister Adel Abdel Mahdi speaks during a funeral ceremony in Baghdad on October 23, 2019. By Ahmad Al-Rubaye for AFP via Getty Images.

Iraq Will Submit UN Complaint Against US for Violation of Sovereignty

“What happened was a political assassination. Iraq cannot accept this.”

Iraq’s parliament voted in an extraordinary session Sunday to expel all American troops from the country and file a United Nations complaint against the U.S. for violating Iraq’s sovereignty with its assassination of Iranian General Qasem Soleimani in Baghdad.

Ahead of the vote, chants of “No, no, America” rang out inside the hall.

“Iraq called on the U.N. Security Council to condemn the bombing and assassinations,” Iraq’s foreign ministry said in a statement following the vote.

Breaking: #Iraqi parliament votes for the withdrawal of all U.S forces and the “Global Coalition” from the country, & submit a complaint to the United Nations against the U.S for violating the sovereignty of Iraq. pic.twitter.com/Sb4oq4Zr81

As The National reported, the Iraqi parliament approved “a five-point action plan that would require the Iraqi government to end the presence of foreign troops in the country, and withdraw its request for assistance from the anti-ISIS global coalition.”

“Parliament also called on the government to ban the use of Iraqi airspace by any foreign power,” according to The National. The resolution still requires the approval of the Iraqi government.

The U.S. currently has around 5,000 troops stationed in Iraq.

The prime minister’s remarks came before Iraqi lawmakers are set to vote on a resolution to end permission for American troops to remain in Iraq.

“But I want the decision to be agreed by all therefore I put to the parliament two options. 1.ending the existence of these forces immediately and start the immediate arrangements for this” 2. Set a timeline for the departure of these forces” said Iraqi PM

“I recommend the first option and keep the friendship between US and Iraq. It’s the interests of Iraq and US to Reorganize the relationship between both sides in a way keeps the sovereignty of Iraq” Iraqi PM said.

The U.S. assassination Soleimani on Iraqi soil was met with fierce condemnation from Iraq’s foreign ministry and the prime minister, who called the drone strike a violation of the nation’s sovereignty.

“What happened was a political assassination,” Mahdi said. “Iraq cannot accept this.”

In a previously undisclosed detail one observer described as “stunning,” Mahdi said Soleimani was in Baghdad to meet with him about a Saudi request for dialogue to relieve tensions in the region—not, as the U.S. has claimed, to plan attacks against American forces.