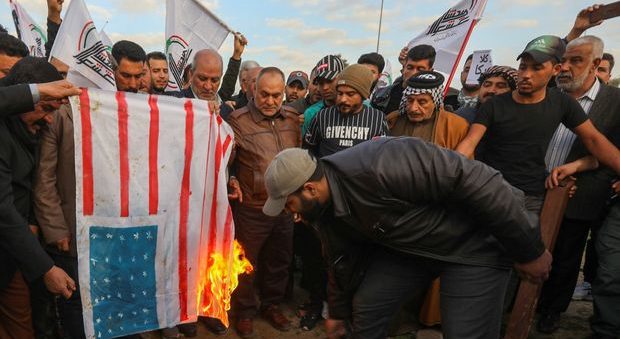 Washington, DC – On Thursday night in a telephone call, Iraqi Prime Minister Adel Abdul-Mahdi told Secretary of State Mike Pompeo to start working out a road map for a US troop withdrawal from Iraq. Abdul-Mahdi showed his insistence following the vote of the Iraqi Parliament on Sunday, January 5, which directed the removal of the US military’s presence in Iraq.

According to the statement about the call, “The prime minister said American forces had entered Iraq and drones are flying in its airspace without permission from Iraqi authorities, and this was a violation of the bilateral agreements.”

The Prime Minister asked Pompeo to “send delegates to Iraq to prepare a mechanism to carry out the parliament’s resolution regarding the withdrawal of foreign troops from Iraq,” according to the statement.

Iraq’s sovereign elected government voted 170-0 to remove US troops. And the US rogue regime is refusing to listen.

This is a criminal military occupation of a sovereign foreign nation.

The US claims it’s “a force for good,” but the people in the actual region say the OPPOSITE pic.twitter.com/RBdblZntEA

The United States rejected the troop withdrawal request made by the Iraqi government:

“On Friday, the U.S. State Department flatly dismissed the request. It said the presence of U.S. troops was crucial for the fight against the Islamic State group and it would not discuss removing them. “Any delegation sent to Iraq would be dedicated to discussing how to best recommit to our strategic partnership — not to discuss troop withdrawal, but our right, appropriate force posture in the Middle East,” said spokesperson Morgan Ortagus.”

In response to the vote by Parliament on US troop withdrawal, top US military officials including Gen. Mark Milley, chairman of the Joint Chiefs of Staff, and Defense Secretary Mark Esper, said there were no plans for the US to withdraw.

The State Department, following through on President Trump’s statement that NATO play a larger role in Iraq, said on Friday: “Today, a NATO delegation is at the State Department to discuss increasing NATO’s role in Iraq, in line with the president’s desire for burden sharing in all of our collective defense efforts.” There are currently 5,200 US troops in Iraq and President Trump has deployed 4,000 more troops to Iraq.

In addition to escalating rather than removing troops, the US is making economic threats saying there needs “to be a conversation between the US and Iraqi governments not just regarding security, but about our financial, economic, and diplomatic partnership.” The US has granted a waiver to Iraq that allows the country to continue importing Iranian gas to meet electricity demands, which expires in February. The US has used this waiver as leverage against Iraq in the past.

After the Parliament voted on Sunday, Trump said: “If they do ask us to leave, if we don’t do it in a very friendly basis, we will charge them sanctions like they’ve never seen before ever. It’ll make Iranian sanctions look somewhat tame. We have a very extraordinarily expensive airbase that’s there. It cost billions of dollars to build. Long before my time. We’re not leaving unless they pay us back for it.”

Iraq has become a battleground between the US and Iran. The people of Iraq do not want their nation to be where the US and Iran fight their conflict.  AP reports that protesters “lambasted the ongoing diplomatic crisis between Iraq, the U.S., and Iran in mass protests across the capital and southern provinces.” In Baghdad’s Tahrir square, thousands of protesters showed their anger and many chanted “Damn Iran and America!” Large demonstrations were also held in southern provinces of Basra, Dhi Qar, Najaf, and Diwanieh.

According to Reuters, Grand Ayatollah Ali al-Sistani, Iraq’s top Shi’ite Muslim cleric, said it was Iraqis who stood to suffer most from the US-Iranian conflict. He condemned the US-Iranian confrontation taking place on Iraqi soil, saying it risked plunging an already war-ravaged country and the wider Middle East into deeper conflict. He described the latest actions as “repeated violations of Iraqi sovereignty. . . Iraq must govern itself and there must be no role for outsiders in its decision-making.”

Another cleric warned during Friday prayers in Tehran that the United States’ bases in the region now created risks. Mohammad Javad Haj Aliakbari, a mid-ranking cleric, told worshippers “From now on, having too many bases, especially in this region, will not act as an advantage for them.”

Iran wants the US out of the Middle East. Iran’s Supreme Leader, Ayatollah Ali Khamenei and President Hassan Rouhani also vowed to eject the US from the region in response to Suleimani’s death. A senior aide to Ayatollah Khamenei,  Ali Akbar Velayati, warned US forces are risking a drawn-out, bloody and unsuccessful stay in the Middle East and “they must leave the region,” further, according to the state-affiliated Fars news agency. “If they do not leave the region, they will face another Vietnam.”

After 17 years of chaos and destruction of multiple countries, the US may find that a rapid withdrawal will serve US interests better than a slow, bloody defeat forcing them out of the region. President Trump left an opening for leaving the region when he said: “We are independent, and we do not need Middle East oil and gas.” This could become an excuse for the US to leave the region.

The United States is unwelcome in Iraq after the assassination of General Qassem Suleimani. If the US remains, it will become an occupying force. Suleimani developed an Arc of Resistance across the Middle East. Members of that Resistance may also take retribution independently of Iran. The US presents many targets in the region to its opponents. Leaving the region is the best option for the US and the countries and people of the Middle East.