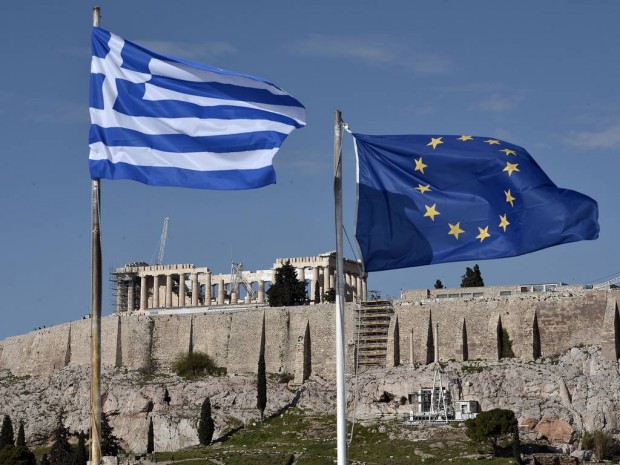 Ireland Showed We Can Get By Without Banks

Above: The Greek and EU flags flutter in front of the ancient Acropolis hill in Athens. Source: The Independent

Television reporters stand in front of the shut doors of banks in Athens and speak as if a few days more of bank closure brings the Greeks that much closer to catastrophe. Media coverage dwells obsessively on the theme that for Greece it is five minutes to midnight, but somehow midnight never comes. Shuttered banks are a striking physical symbol of economic disaster, but even they are not proof that the final dénouement is at hand.

I recall a six-and-a-half month strike that closed all banks in Ireland in 1970 which was meant to have similarly calamitous results as predicted for Greece today, but in fact had very little destructive impact. Contrary to expectations, Irish people rapidly found other ways of carrying out the functions previously performed by the banking industry. The economist Michael Fogarty, who wrote the official report on the bank dispute, was quoted by the Irish Independent as saying that “the services of the clearing banks proved by no means as indispensable as would have been expected before the dispute”. Others take the example of the Irish bank strike as evidence that much of what banks do is a “socially useless activity”.

There were many bank strikes in Ireland in this period but the longest and best remembered took place between 1 May and 17 November 1970. It was recalled vividly, and sometimes with nostalgia, in later years by my parents, Claud and Patricia Cockburn, who lived a mile outside the town of Youghal in east County Cork. Outgoings always seemed to exceed income so their relations with local bank branches in Youghal were often frosty and occasionally confrontational. Bailiffs were a threat, particularly during the years that my father was suffering from, and later recovering from, TB, though financial disaster was usually averted at the last moment. Even so, for many years we had no car, relying on horse-drawn gigs and traps, and a phone had come and gone, a victim, my father would explain, of some “financial blizzard”.

Claud and Patricia were often on tenterhooks waiting for a cheque to arrive from one or other of the newspapers and magazines to which he contributed. Although we lived well, the income of a freelance writer is always precarious and my father spoke of the strike as an enjoyably stress-free period when he was able to get on with writing books and articles. In a sense, he had become the judge of his own overdraft needs, though I do not recall that this led to any explosion in our expenditure. He was not alone in enjoying the crisis which turned out to be no such thing. Almost half a century later, many Irish people remember with relish how they successfully replaced the banks with other ways of dealing with payment and credit.

Pensioners wait outside the national bank of Greece. Shuttered banks are a striking physical symbol of economic disaster, but even they are not proof that the final dénouement is at hand (AP)

Undated cheques, often endorsed over to others but never cashed, became a form of currency. When the supply of cheques dried up, people wrote new ones on any available piece of paper, sometimes adding a postage stamp to give it an official appearance. There was talk of some cheques being written on beer mats and lavatory paper. It was a system that worked because it drew on local knowledge and trust. The people exchanging cheques and IOUs knew each other well, and if they did not, they could soon find the necessary information to assess each other’s credit-worthiness. At that time there were 11,000 pubs in Ireland and 12,000 shops that became substitutes for the banks. Antoin E Murphy, who carried out a study on the strike’s effects, found the public’s ability to assess risk “was based on a vast pool of information available to transactors on the credit-worthiness of other transactors”.

Indeed, their information was likely to be much better than a bank manager or his staff. The accuracy of their judgement was demonstrated when the strike came to an end with most pieces of paper turning out to be worth what was written on them. There were few insolvencies, the largest being a transport company called Palgrave Murphy, which was in trouble anyway. Overall, imports, which were expected to be badly hit, turned out largely unaffected.

The informal and improvised nature of the new financial system led to a slew of stories about money lost and made on the strength of a grubby piece of paper substituting for a cheque. One man had bought a racehorse without any funds in the bank, but it had won several races by the time the banks reopened. A story circulated about a publican in Dublin who hid a large bundle of cheques and other paper in the chimney of his house without informing his wife, who, on one cold day, felt a need to light the fire with predictable results. I have always thought this a tall story since it assumes a high degree of naivety which I don’t associate with the character of an Irish publican. Everything became more cumbersome and certain transactions, such as buying and selling property, became impossible or very complicated because essential documents proving ownership were locked in the vaults of strike-bound banks.

Probably, the situation in Ireland 45 years ago could not be precisely replicated in Greece today, but the outcome of the prolonged strike does show how human ingenuity will find ways of doing the same job that banks do when the need is great enough. It may be that a personalised credit system was easier to create in Ireland because the population was small, only three million, and Ireland has always been a country of frequent and intense social contact. But this folksy image of Ireland was already becoming outdated in 1970 and it may be that in any country, large or small, the necessity of paying wages and buying and selling goods means a method will be found to do so without using the banking system. Presumably the same imperatives would apply in Greece if the ban

In one respect, Greeks today may be better able to live with threats of economic disaster than the Irish in 1970, supposing the Greek banks do stay closed. It is simply that the threat of such a calamity lacks menace for those to whom disaster has already happened. After eight years of depression and 27 per cent of people unemployed, many Greeks have little left to lose. They have no interest in trying to access bank deposits if they no longer have any. There is a collective blind spot among EU politicians who keep warning Greeks that economic ruin lies ahead unless they agree to more of the austerity which caused the ruin in the first place.

It would be romantic to imagine that a home-grown people’s banking system would grow up to replace commercial banks, but the Irish experience does show that the disaster that follows a bank shutdown is not total. In the event, Irish bankers turned out, when the financial crash came in 2008, to be far more irresponsible than those who wrote cheques on beer mats in 1970.

ks stay shut and people have to find a means to survive.