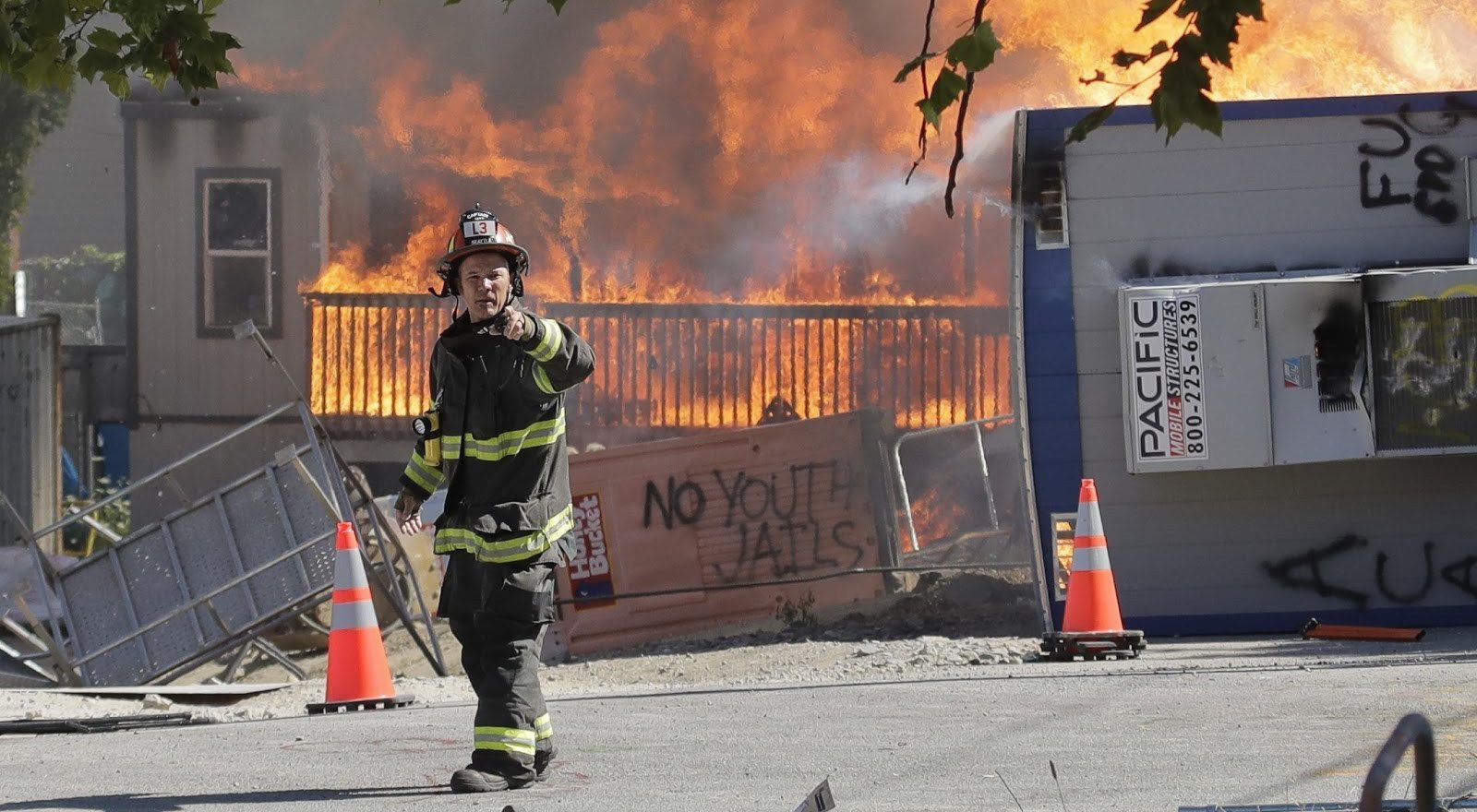 Is Burning Prisons The New Knocking Down Confederate Statues?

Saturday afternoon in Seattle, Washington, a construction site where a youth detention center was being built burned to the ground.

The King County juvenile detention facility is assumed to have been set ablaze by some of the thousands of Seattle demonstrators who marched in protest to both the federal government terrorizing it’s neighboring city of Portland, Oregon, as well as policemen murdering innocent and unarmed Black Americans.

The timing of the fire set to the youth prison feels deeply symbolic, especially in light of a Michigan court case where a Black teenage girl is currently serving time inside of a juvenile detention center after failing to finish her homework. “Grace,” a teenager who had been placed in a juvenile detention facility back in mid-May for allegedly being a threat to her mother, was denied early release by Oakland County Judge Mary Ellen Brennan for not completing her homework, TIME reported. Judge Brennan, a white woman, told Grace at her hearing: “The right thing is for you and your mom to be separated for right now.”

This case is yet another example of white government authority disturbing the healing processes of Black families by imprisoning Black bodies for the sake of their own good. White folx in positions of power overstep their boundaries when it comes to sentencing Black children. Detention centers full of poor Black children serving time sentenced to them by privileged white adults serve no humane purpose in our society.

The construction of the King County juvenile detention facility began before Seattle announced its plan to end the incarceration of minors with a strategy named, “The Road Map to Zero Youth Detention,” written by King County government officials.

The decision to end the incarceration of minors came after Seattle residents pushed back against the juvenile development. The data released in the past five years proves incarcerating minors solely affects minority children. According to the Office of Justice Programs, “since 1995, the overall juvenile arrest rate declined most for Asian youth (86%), followed by white youth (75%), American Indian youth (72%), and black youth (70%). Despite these declines, the disparity in arrest rates between white youth and black youth has increased in recent years. In 1995, for example, black youth were 2.1 times more likely to be arrested than their white peers. By 2018, this ratio increased to 2.6.”

The burning of the King County detention center in Seattle (which is 64 percent white), and the deployment of federal agents to inflict harm on peaceful demonstrators in Portland (which is 77 percent white) is all the proof our generation needs to believe that systemic change in overturning the criminalization of blackness is the new “me too” movement.

When two of the whitest, most granola eating, mountain climbing cities in the country show up for the Black Lives Matter Movement, it’s safe to say that white America has stepped out of her comfort zone and into the danger zone. And we fucking love to see it.