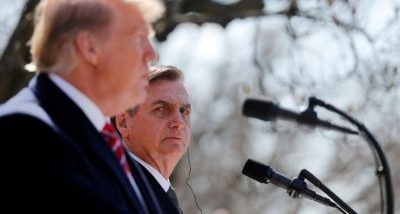 Is It Really All That Surprising That Trump Wants Brazil In NATO?

Feigning shock and publishing moralizing polemics isn’t going to change the fact that it was entirely predictable that Trump’s “Fortress America” grand strategy would ultimately see the US seek to expand its premier multilateral security structure across South America in order to formally incorporate its most important country of Brazil in one capacity or another.

Brazilian President Bolsonaro’s first visit to the US made global headlines after Trump announced that he intends to designate his South American partner as a “Major Non-NATO Ally” (MNNA) and possibly even seek its formal admission into the multilateral alliance. The news immediately triggered a flurry of reactions from folks who feigned shock and published moralizing polemics about this impending geo-military development, but the fact of the matter is that it was entirely predictable that the US’ “Fortress America” grand strategy would eventually reach this phase, even if it happened a lot quicker than many had expected. After all, it was only two weeks ago that National Security Advisor Bolton spoke about the need for the US to build a “broad coalition” for dealing with Venezuela, which the author interpreted at the time as a clear signal of the US’ intent to establish a NATO-like structure in the hemisphere from the “Lima Group” of states.

While this fast-moving eventuality may not be to many commentators’ liking, it doesn’t change the fact that it objectively exists and that denying it isn’t going to affect anything in real life. Rather, it’s much more pragmatic to analyze what the consequences of this move might be in order to better prepare for the most likely forthcoming scenarios. Having gotten that out of the way, there are key differences between a MNNA and a formal NATO member, namely that the former doesn’t have multilateral mutual defense obligations and is therefore less likely to contribute troops abroad when asked. As a case in point, Argentina and Pakistan are both MNNAs yet neither of them have contributed troops to Afghanistan despite NATO officially having a mission there, for example, so it would be an exaggeration to automatically assume that Brazilians will be used as cannon fodder for all sorts of US invasions elsewhere just by becoming a MNNA.

Actually, what a lot of the “chattering class” might not realize is that MNNA designation is usually only pertinent for expanding “deep state” intelligence cooperation and facilitating arms sales, which would make a lot of sense in this case because of the US’ desire to deepen its presence in South America via Brazil. Furthermore, the Stockholm International Peace Research Institute’s (SIPRI) latest report on the international arms trade from 2014-2018 indicates that the US is Brazil’s second-largest military supplier at 17% of total imports, behind France’s 26% and slightly ahead of the UK’s 15%. Given Trump’s public boasting about improving the business prospects of the military-industrial complex and keeping or creating new jobs at home because of it, there’s a certain logic to locking Brazil in a MNNA pact so that it can facilitate even more arms exports to it and chip away at France’s leading position in that market.

Of more tangible policymaking significance, Brazil’s designation as a MNNA could potentially see it cooperating closer with the US in anti-drug operations in the porous so-called “triple frontier” between it and its Argentinian and Paraguayan neighbors that Washington occasionally claims is a hub of Hezbollah activity. The US actually tried linking Hezbollah to the cartels late last year in what might be a precursor to the “publicly plausible” justification that could be relied upon for explaining Brazil’s MNNA designation and potential formal membership in the alliance, as well as the possibly forthcoming presence of American troops in that strategic region which also contains the Guarani Aquifer, which is one of the world’s largest. Putting everything together, Brazil’s enhanced military-intelligence partnership with the US could involve everything from arms sales to anti-drug operations, countering Iran, and water wars, to say nothing of potentially playing a “Lead From Behind” role in regional regime change operations and/or subsequent “stabilization missions”.

Breaking The Myth Of BRICS

All of this begs the question to many of Brazil’s future relevancy in BRICS, but even having to ask that question belies a lack of proper understanding about what that bloc even really is. Unlike many have either been led to believe by Alt-Media and/or projected their well-intended wishful thinking political fantasies onto, BRICS isn’t as “anti-Western” as they might have thought. Rather, it simply seeks to emulate existing Western financial models but in a more equitable (multipolar) way that reduces unipolar dependency on the US and the international institutions that it controls. Although economics have always been important determinants of geopolitics and vice versa, it needs to be said that the BRICS countries never intended to build a geopolitical bloc that would be based upon their economic ties, not least because of the serious geopolitical divergences between China and India. It was only the “chattering class”, and not government officials, that imagined otherwise.

Having said that, Brazil wasn’t really doing much in BRICS to begin with other than contributing to symbolic structures such as the BRICS Development Bank and using the bloc’s events as an opportunity acquire global attention when espousing emotional rhetoric about building a more equitable world order. BRICS has pretty much always been “China+”, or to be more “politically correct”, RIC (Russia-India-China), with Brazil and South Africa tacked on almost in hindsight in order to give off the pretense of global influence by establishing a presence in the “Global South”. As such, not much will therefore change with Brazil’s actual role in this organization other than the rest of the world increasingly becoming aware of the objective reality that was just described, even if some try to spin it in a way to make it seem like “it never was like this” before the US’ Hybrid War on Brazil succeeded.

Brazil’s formal incorporation into NATO or its much more realistic designation as only a MNNA are both game-changing geopolitical developments that will have far-reaching and long-term consequences for the Western Hemisphere, especially because they tie the US “deep state” (and specifically its military-intelligence wing) closer to Latin America’s most influential Great Power and therefore greatly fortify Trump’s “Fortress America” grand strategy. The South American state isn’t just an attractive market for US arms, but is a continental leader by virtue of its enormous size and can help the US’ manage the region by proxy through the “Lead From Behind” stratagem. Not only that, but it also occupies enormous fresh water reserves both above and below ground, as well as promising offshore energy ones too, making it the most important prize of “Operation Condor 2.0” thus far. Add to it that Bolsonaro is Trump’s ideological ally, and the US-Brazilian Strategic Partnership just became the new lynchpin of hemispheric affairs.