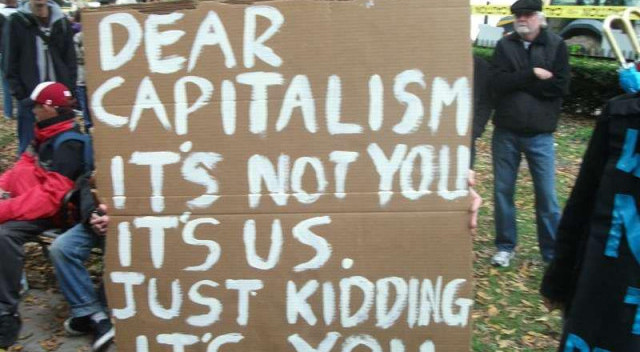 Is The Market Economy Working?

Some thoughts on the question that will not go away: Capitalism vs. socialism

“The whole art of Conservative politics in the 20th century is being deployed to enable wealth to persuade poverty to use its political freedom to keep wealth in power.” –– Aneurin Bevan (1897-1960), Labour Party (UK) minister

The fact that Donald J. Trump is a champion –- indeed, a model, or as he might say, a huge model –- of capitalism should be enough to make people turn away from the system, but the debate between capitalism and socialism continues without pause in the Trump era as it has since the 19th century. The wealth gap, affordable housing, free education, public transportation, a sustainable environment, and health care are some of the perennial points of argument we’re all familiar with.

So many empty houses … so many homeless people –- Is this the way a market economy is supposed to work?

Twice in recent times the federal government in Washington has undertaken major studies of many thousands of federal jobs to determine whether they could be done more efficiently by private contractors. On one occasion the federal employees won more than 80% of the time; on the other occasion 91%. Both studies took place under the George W. Bush administration, which was hoping for different results.  The American people have to be reminded of what they once knew but seem to have forgotten: that they don’t want BIG government, or SMALL government; they don’t want MORE government, or LESS government; they want government ON THEIR SIDE.

As to corporations, we have to ask: Do the members of a family relate to each other on the basis of self-interest and greed? 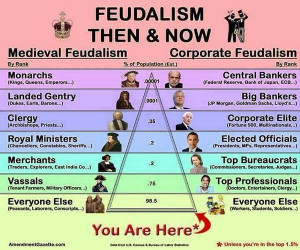 Speaking in very broad terms … slavery gave way to feudalism … feudalism gave way to capitalism … capitalism is not a timelessly valid institution but was created to satisfy certain needs of the time … capitalism has outlived its usefulness and must now give way to socialism … the ultimate incompatibility between capitalist profit motive and human environmental survival demands nothing less.

The system corrupts every important aspect of our lives, including the one which takes up the most of our time -– our work, even for corporation executives, who demand huge salaries and benefits to justify their working at jobs that otherwise are not particularly satisfying. Several years ago, the Financial Times of London reported on Wall Street’s opposition to salary limits:

Senior bankers were quick to warn the plans would cause a brain drain from the profession as top executives seek more rewarding jobs out of the public eye. Unlike other careers where job satisfaction and other considerations play a part, finance tends to attract people whose main motivation is money. … ‘The cap is a lousy idea,’ complained one top Wall Street executive. ‘If there is no monetary upside, who would want to do these jobs?’

As for those below the executive class … When they work, it’s too often just any job they can find, rather than one designed to realize innermost spiritual or artistic needs. Their innermost needs are rent, food, clothes, and electricity.

For those concerned about the extent of freedom under socialism the jury is still out because the United States and other capitalist powers have subverted, destabilized, invaded, and/or overthrown every halfway serious attempt at socialism in the world. Not one socialist-oriented government, from Cuba and Vietnam in the 1960s, to Nicaragua and Chile in the 1970s, to Bulgaria and Yugoslavia in the 1990s, to Haiti and Venezuela in the 2000s has been allowed to rise or fall based on its own merits or lack of same, or allowed to relax its guard against the ever-threatening imperialists.

The demise of the Soviet Union (even with all its shortcomings) has turned out to be the greatest setback to the fight against the capitalist behemoth, and we have not yet recovered.

How could the current distribution of property and wealth reasonably be expected to emerge from any sort of truly democratic process? And if this is the way regulated capitalism works, what would life under unregulated capitalism be like? We’ve long known the answer to that question. Theodore Roosevelt (president of the United States 1901-09) said in a speech in 1912: “The limitation of governmental powers, of governmental action, means the enslavement of the people by the great corporations who can only be held in check through the extension of governmental power.”

And what do the corporate elite want? In a word: “everything” … from our schools to our social security, from our health care to outer space, from our media to our sports.

“We are all ready to be savage in some cause. The difference between a good man and a bad one is the choice of the cause.” – William James (1842-1910)

A few years ago, when George W. Bush came out as a painter, he said that he had told his art teacher that “there’s a Rembrandt trapped inside this body”.  Ah, so Georgie is more than just a painter. He’s an artiste.

And we all know that artistes are very special people.

They’re never to be confused with mass murderers, war criminals, merciless torturers or inveterate liars.
Neither are they ever to be accused of dullness of wit or incoherence of thought or speech.

Artistes are not the only special people.

And animal lovers: Herman Goering, while his Luftwaffe rained death upon Europe, kept a sign in his office that read: “He who tortures animals wounds the feelings of the German people.

Adolf Hitler was also an animal lover and had long periods of being a vegetarian and anti-smoking.

Charles Manson was a staunch anti-vivisectionist.

And cultured people: This fact Elie Wiesel called the greatest discovery of the war: that Adolf Eichmann was cultured, read deeply, played the violin.

Some Nazi concentration camp commanders listened to Mozart to drown out the cries of the inmates.

Former Bosnian Serb politician Radovan Karadzic, convicted by the International Criminal Tribunal for the former Yugoslavia for war crimes, genocide, and crimes against humanity, was a psychiatrist, specializing in depression; a practitioner of alternative medicine; published a book of poetry and books for children.

Members of ISIS and Al Qaeda and other suicide bombers are genuinely and sincerely convinced that they are doing the right thing, for which they will be honored and rewarded in an afterlife. That doesn’t make them less evil; in fact it makes them more terrifying, since they force us to face the scary reality of a world in which sincerity and morality do not necessarily have anything to do with each other.