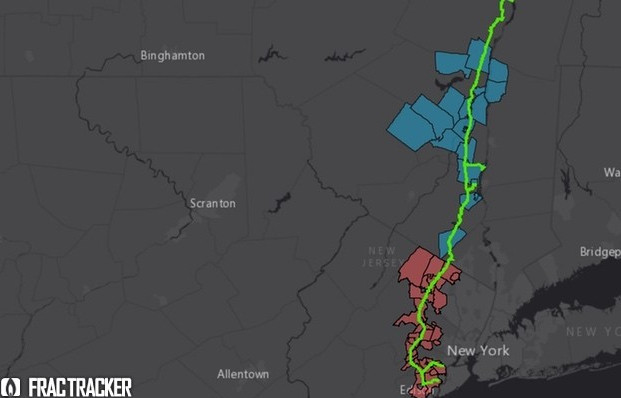 Is The Pilgrim Pipeline Protest The Next #NoDAPL?

Is this the next #NoDAPL? The Ramapough Lunaape tribe in the township of Mahwah, New Jersey are protesting the interstate Pilgrim Pipeline, a proposed 178-mile dual pipeline that would carry fracked Bakken shale oil from Albany, New York to the Bayway Refinery in Linden, New Jersey.

While it is not yet finalized, the preliminary route crosses five counties and 30 municipalities in New Jersey and five counties and 25 municipalities in New York, as well as the Highlands region, where the groundwater and surface water are the direct source of water for more than 4.5 million people in both states, according to the Coalition Against Pilgrim Pipeline.

The pipeline would also run through a portion of the Ramapo Valley Reservation. Similar to the Standing Rock Sioux, the Lunaape worry that a potential pipeline leak would pollute drinking water and sacred sites.

“The Pilgrim Pipeline is another of the many needless pipelines running through the Lunaape homeland which is endangering the water of millions, while it appears to be criminally circumventing federal law,” Ramapough Lunaape Chief Dwaine Perry told MintPress earlier this month.

The $1 billion project, operated by Connecticut-based Pilgrim Pipeline Holdings, consists of two parallel pipelines so crude and refined products can be sent in both directions. The pipeline is capable of carrying 400,000 barrels of oil per day. The company claims that the pipeline is “far safer” and “more environmentally sound” than transferring crude by rail or barge.

The company, which announced the project three years ago, has not yet applied for the permit that would define their exact pipeline route.

CBS New York reported in 2014 that Pilgrim representatives used “scare tactics” to intimidate homeowners living along the possible pipeline route to gain access to their property for surveys and studies.

Members of the Lunaape want others in New Jersey to join their fight against the project. NBC New York reports that the Lunaape have displayed anti-Pilgrim pipeline signs alongside teepees that were initially erected to recognize the efforts of the Standing Rock Sioux, who are protesting the heavily contested Dakota Access Pipeline in North Dakota.

The tribe has been hosting teach-ins about the pipeline at their encampment. Dozens of people have already attended.

“The community needs to stop looking at the Ramapoughs as the canary in the mine and get their helmets on and stand with us, because if that goes it doesn’t matter what your home costs, you can’t drink oil,” Perry told NBC.

The protest, however, has hit a legal snag as the tribe has not yet obtained the necessary permits to camp out on land near the pipeline’s proposed route. Mahwah has issued a summons for their occupation, even though the town is officially against the pipeline and agrees that its route through Ramapo Valley Reservation is unacceptable.

“One leak will determine the fate of our community and the millions of people between here and the Newark basin,” Mahwah Mayor William Laforet said.

New Jersey’s Sierra Club asserts that pipeline construction would have “deleterious effects” on communities, wildlife and the surrounding environment.

“In the Highlands and other sensitive areas, we would see wetlands destroyed, drinking water and critical habitats threatened, endangered species leveled to the ground, and impacts to waterways from more erosion due to construction,” the environmental group argues. “The pipeline would pass through environmental justice communities that have already seen too much air and water pollution as a result of the fossil fuel industry.”

The Coalition Against Pilgrim Pipeline, which consists of 40 different groups, adds that “the source of the oil and its consequences for our climate, along with the environmental impacts of the project’s construction and operation, will have long-term, negative effects on both states.”

“The town of Mahwah should stop harassing the tribal camp and focus their efforts on stopping the pipeline,” she said.

The coalition is calling on New York Gov. Andrew Cuomo and New Jersey Gov. Chris Christie to oppose the project.

Cuomo’s position on the Pilgrim Pipeline is unclear, but New York state is ramping up its clean energy efforts under the governor’s goal of sourcing 50 percent of the state’s power from renewables. Cuomo and the New York State Department of Environmental Conservation also denied a key permit to the Constitution Pipeline Project in April.

Christie, however, is more of a wildcard. Although the Garden State is a solar power all-star, Christie is a fan of pipelines and a vocal supporter of the controversial Keystone XL. Although he has not commented directly about the Pilgrim Pipeline, during an appearance with New Jersey’s 101.5 in 2014, the governor said, “If we want to have more clean and affordable energy, we have to build pipelines to move it … There’s 2.2 million miles of pipeline in the United States already. Things seem to be going in the main fairly well and with the energy revolution that we have going on we need to do more.”

“In general, I’m a fan of pipelines,” he added.