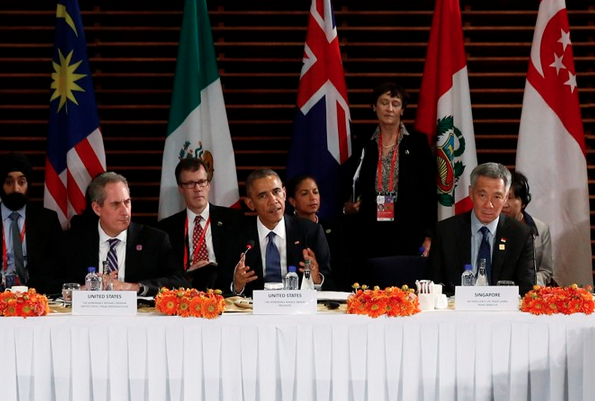 Is The Trans-Pacific Partnership Unconstitutional?

It is January 2017. The mayor of San Francisco signs a bill that will raise the minimum wage of all workers from $8 to $16 an hour effective July 1st.  His lawyers assure him that neither federal nor California minimum wage laws forbid that and that it is fine under the U.S. Constitution.

Then, a month later, a Vietnamese company that owns 15 restaurants in San Francisco files a lawsuit saying that the pay increase violates the “investor protection” provisions of the Trans-Pacific Partnership (TPP) agreement recently approved by Congress. The lawsuit is not in a federal or state court, but instead will be heard by three private arbitrators; the United States government is the sole defendant; and the city can participate only if the U.S. allows it.

It is not a far-fetched scenario. The TPP reportedly includes such provisions, as a means of solving a thorny problem. In the United States, the courts are, by and large, independent and willing to fairly decide challenges to arbitrary government laws and rulings, no matter who the plaintiff is. The same is not consistently true in less developed countries.

The solution proposed in the TPP is to allow foreign investors to bring claims for money damages over violations of the TPP’s investor protection provisions before a private arbitration tribunal that operates outside the challenged government’s court system. One arbitrator would be chosen by the investor, one by the country being challenged, and a third by agreement of the other two arbitrators.

The arbitrators are often lawyers who specialize in international trade and investment, for whom serving as arbitrators is only one source of their income. Unlike U.S. judges, they are not salaried but paid by the hour, and they can rotate between arbitrating cases and representing investors suing governments.

Despite the fairness of our court system, the U.S. government has consented in prior trade agreements, and in a leaked version of the still-secret TPP, to allow foreign investors to bypass our courts and instead move to “investor-state” arbitration. Thus, challenges based upon TPP to our duly enacted laws and other regulatory actions would be decided by three individuals who are not government officials and need not be American citizens. And they would have the final word as to whether the federal government will be compelled to pay damages, because there is no judicial review in any U.S. court of the merits of these arbitral rulings.

If such a case were brought, the foreign investor would sue the United States and ask that the arbitrators find that “investor-based expectations” under the TPP were violated. So, for example, it might claim that doubling the minimum wage from its prior level violated the TPP’s provisions requiring fair and equitable treatment of foreign investors. If the arbitrators agreed, they would assess money damages that would be paid from the federal treasury, but the San Francisco wage law would not be directly affected. However, because the ruling would open the door for other foreign investors in any number of businesses to bring similar claims, Congress would almost assuredly step in and override the wage increase to prevent opening the doors to the Treasury to every foreign investor in San Francisco. Indeed, in a similar situation Canada reversed a toxics ban and published a worldwide advertisement that the chemical was safe in order to avoid the possibility of having to pay substantial damages.

In recent years, there has been a major increase in the use of arbitration in the United States to decide commercial disputes, but those cases involve contracts in which the parties agreed to arbitration, with the outcome generally depending on how factual issues are resolved. TPP arbitrators, by contrast, will decide what is essentially a legal question: whether governmental actions, which are designed to protect our health, safety, environment and economic well-being, are consistent with the TPP. Those protections extend from locally enacted laws like the San Francisco minimum-wage provision, to state statutes and regulatory actions, to laws passed by Congress and decisions of federal regulatory agencies. And under the TPP, as under other trade agreements, decisions of a majority of the arbitrators on compliance with the TPP will not be subject to review in any court, federal or state. Among the other important public policy measures currently being debated that might be the basis for a TPP claim by a foreign investor include water rationing in California, the legality of selling e-cigarettes to minors, and the state regulation of medical facilities performing abortions. If a foreign investor won a TPP arbitration in these situations or the wage increase discussed above, that would not only cost the Treasury, but it would disadvantage American competitors who cannot benefit from TPP arbitrations, unless the offending law were set aside. And if governments feel compelled to set aside such laws in response to adverse rulings, the three arbitrators will effectively have substituted their own judgments for that of the electorate.

Under the TPP, the arbitrators will act like judges, deciding legal questions just as federal judges decide constitutional claims. However, unlike judges appointed under Article III of the Constitution, TPP arbitrators are not appointed by the president or confirmed by the Senate, nor do they have the independence that comes from life tenure. And that presents a significant constitutional issue: Can the president and Congress, consistent with Article III, assign to three private arbitrators the judicial function of deciding the merits of a TPP investor challenge?

The Supreme Court has not ruled on this precise question. But the collective reasoning in four of its recent rulings bearing on the issue leans heavily toward a finding of unconstitutionality. The Court has placed significant limits on the ability of Congress to assign the power to decide cases traditionally handled by the courts to people other than Article III judges, even when the judicial substitutes are full-time federal officials, such as bankruptcy judges or the heads of federal agencies. Moreover, in each case in which the Court approved of a dispute being taken away from federal judges, there was judicial review at the end of the process, which is not the case with TPP.  Moreover, although the Justice Department issued a lengthy opinion in 1995 on when arbitration can be used to replace court adjudication, it did not then, and has not since then, defended the constitutionality of arbitration provisions like those in the proposed TPP.

As it presses for the passage of TPP, the administration needs to explain how the Constitution allows the United States to agree to submit the validity of its federal, state, and local laws to three private arbitrators, with no possibility of review by any U.S. court. Otherwise, it risks securing a trade agreement that won’t survive judicial scrutiny, or, even worse, which will undermine the structural protections that an independent federal judiciary was created to ensure.