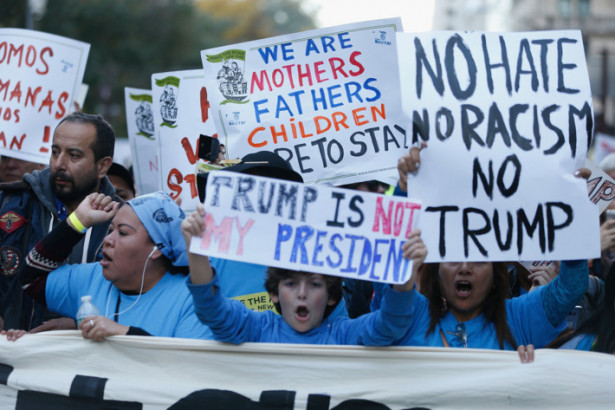 In the era of Trump, we will need to consolidate counter-power via participatory democracy and economic self-management at the local level.

The mass protests across the United States in response to Donald Trump’s presidential election victory constitute a palpable and growing potential for the formation and constructive utilization of various anti-fascist fronts and coalitions. While these might be limited to protest and survival in typical Trump strongholds, the situation is markedly different in urban settings.

In many cities, anti-Trump demonstrations have included far-left groups, immigration-rights advocates, Black Lives Matter activists, reproductive rights supporters and a number of other political actors. Amidst calls for “people power,” these different movements together chanted “not my president!” and vocalized their support for so many other groups that have been marginalized, ridiculed and discriminated against by the president-elect.

People power need not be confined to a chant. The formation of anti-fascist coalitions provides the opportunity to convert these dreams and aspirations into a concrete and transformative program at the municipal level. What role can anti-fascism play in building this alternative?

First, Trump’s program includes canceling “all federal funding to sanctuary cities.” These serve as safe havens for undocumented immigrants, primarily through limiting the enforcement of Federal Government laws at the local level (often through non-cooperation). The protection can also include proactive policies, such as providing some form of documentation through municipal ID programs, which have been instituted in New York City, San Francisco and New Haven, among others.

Trump’s stated opposition to sanctuary cities has put such municipalities at the forefront of the resistance. The mayors of Seattle, San Francisco, New York City,Los Angeles and Philadelphia have all pledged that their cities will remain sanctuaries, even under threat from Donald Trump. If Trump is to move forward with his plan to deny funding to sanctuary cities, such places will be forced to think creatively about how they can — together, as a confederation of municipalities — resist. Fractures between national and local governments will be widened.

Second, policy innovation is already taking place at the municipal level. The practice of sanctuary cities is just one example. City governments in the San Francisco Bay Area, New York City, Greater Boston, Chicago are increasingly funneling resources into worker-cooperative development, and devolving fiscal capacity to the community through participatory budgeting — both of which have also empowered undocumented immigrants in the policy realm as well as in their day-to-day economic well-being.

These developments are limited, even within the context of the cities themselves, but they can be pushed much further. The way for this to be done is through anti-fascist coalitions. In many of these cities there exists a smattering of progressive and even left-wing forces. This election has provided the sustained impetus for such groups to come together beyond the level of protest and contestation we have been seeing in recent weeks.

Third, the current crisis in the Democratic Party may not threaten its existence for the time being, but its failure to nominate a presidential candidate who was not a neoliberal technocrat has strengthened the call for a party that advances a more robust alternative to the status quo — and of course to fascism as well. Under a Trump presidency, those who are committed to resisting fascism and advancing an alternative will have an opportunity to advance the latter in municipal contexts. Individuals and groups are open to both different ideas and different organizations.

Fourth, the Bernie Sanders campaign has allowed for a normalization of the word “socialism” at the municipal level. The somewhat vague footing of the term “democratic socialism” leaves the door open to interpretations that are not simply social democratic, but can veer off into a libertarian socialism that seeks to create post-state and post-capitalist institutions. With the terminology of democratic socialism only recently being mainstreamed, there is ample opportunity to not simply ask what socialism means as an idea, but what it can mean at the policy level.

As such, this is not simply about individual municipalities acting on their own, but about formal non-state federalist arrangements between municipalities, such as the ones named above.

Murray Bookchin, an American eco-anarchist who became a self-styled “communalist,” proposed the idea of “libertarian municipalism” — a notion that relied on the development of confederal political structures as a counter-power to the centralized nation-state.

In The Next Revolution, Bookchin broadly outlines a program and rough design of libertarian municipalism and anti-state confederalism of cities and towns. Within cities, he discusses the possibilities of advancing a minimum policy program and maximum program. The former meets demands for improved welfare of residents and generates pockets of direct participation and empowerment that can serve as stepping stones to more wholesale institutional transformation. The maximum program is one in which people power is at the center of this institutional transformation: here, decision-making power is transferred from municipal-level representative institutions to that of direct-democratic assemblies.

For Bookchin, one approach to achieving both the minimum and maximum program is to “electorally” engage “in a potentially important center of power — the municipal council,” so as to “compel it to create legislatively potent neighborhood assemblies.” More specifically, Bookchin writes that “communalists do not hesitate to run candidates in municipal elections who, if elected, would use what real power their offices confer to legislate popular assemblies into existence.”

Taken a step further, Bookchin writes that “a confederalist alternative would be based on a network of policy-making popular assemblies with recallable deputies to local and regional confederal councils — councils whose sole function, I must emphasize, would be to adjudicate differences and undertake strictly administrative tasks.”

Janet Biehl, Bookchin’s longtime intellectual partner, writes that “city charters or other constitutions would be altered to legitimate the power of the assemblies in local self-government.” Many on the Left — including anarchists — are paying closer attention to the role of constitutions. One may even take this further and look at possibilities for advancing a post-state monetary system that is consistent with confederalism, such as that outlined by Nathan Cedric Tankus.

Whatever the complications might be in terms of the relationship between policymaking and administration, representation and direct participation and other issues, Bookchin’s broader point is that municipalities can be the site of institutional transformation and the material bases for the construction of a viable counter-power.

To be clear, I am not arguing that we will see libertarian socialists lead an anti-state revolution in the United States akin to what is taking place in Rojava. Rather, my point is that there is ample opportunity — even a need — to construct anti-fascist coalitions around the array of issues that will suffer some severe setbacks under a Trump administration.

These anti-fascist fronts and coalitions can be stitched together through platforms that resemble something between a minimum and maximum program of libertarian municipalism and confederalism, as well as through other platforms that advance social and environmental justice — ones similar to theMovements of Black Lives Platform (which calls for participatory budgeting at local, state and federal levels, as well as a cooperative economy), or to that of granting undocumented immigrants the right to vote in local elections. More broadly put, platforms and coalitions that are libertarian socialist, anti-racist and feminist can be stitched together under the banner of anti-fascism.

What makes this possible is that developments around inter-municipalism and transnational municipalism are already taking place — and even accelerating. Organizations within many cities are already banding together through coalitions such as the Right to the City Alliance (RTTC), which has put together a progressive platform around issues as wide-ranging as the commons, economic, indigenous and environmental justice, police harassment and migrant rights.

Under the banner of “Democracy and Participation,” the RTTC proposes “the right of community control and decision-making over the planning and governance of the cities where we live and work, with full transparency and accountability, including the right to public information without interrogation.”Another core component of the RTTC strategy is internationalism, described in their mission statement as “the right to support and build solidarity between cities across national boundaries, without station intervention.”

A semblance of such internationalism can be found in programs such as Sister Cities International (Rome actually declared Kobane a sister city) and United Cities and Local Governments (UCLG), which is effectively an international league of municipalities. Relatedly, there are also state-level municipal leagues, and a National League of Cities (NLC). Issue targeted inter-city organizations include 100 Resilient Cities, the Creative Cities Network, International Cities of Refuge Network (ICORN), and a number of others. In effect, municipalism, municipalization and regionalism is already being mainstreamed.

COUNTER-POWER AT THE LOCAL LEVEL

Even in the US, a victorious mayoral campaign advanced a platform similar to that of libertarian municipalism. The Jackson Plan, promoted by the Malcolm X Grassroots Movement and the former Mayor of Jackson, the late Chokwe Lumumba, has three pillars: “Building People’s Assemblies”, “Building a Broad-Based Solidarity Economy — sometimes put as building “the Mondragon of the South” — and “Building a Network of Progressive Political Candidates.”

Assemblies are not a vague term here, but are rather “organized as expressions of participatory or direct democracy.” When asked about direct democracy in an interview with Jacobin, Chowkwe Lumumba states “I think the people should become more and more involved in reforming and changing the structures that surround them and the people that surround them — determining who handles structures, and how they should be elected, and who should be elected — until the people’s power becomes the same as, becomes simultaneous with, the development of government.” Here one finds a successful campaign — in the Deep South, too! — explicitly based on Black self-determination and libertarian socialism.

Right now, a nascent anti-fascist movement is coalescing in cities and towns across the US. Yet this anti-fascist movement need not remain in a state of pure opposition and resistance. Instead, coalitions can and must be formed, leveraging their power to advance a program that is in fact putting forward an alternative. In a sense, for the time-being, this propositional power might be the best means for waging resistance and opposition as well.

Before Trump and his fascist supporters can really be challenged at the national level, we will have to establish and consolidate counter-power at the local level. It is through advancing a program of participatory democracy, economic self-management, racial justice, environmental justice and gender justice that the most effective bases of counter-power can be formed. With a specified policy vision that addresses the material concerns of a multi-racial US working class, the left will be able to not only build counter-power, but even counter-hegemony.