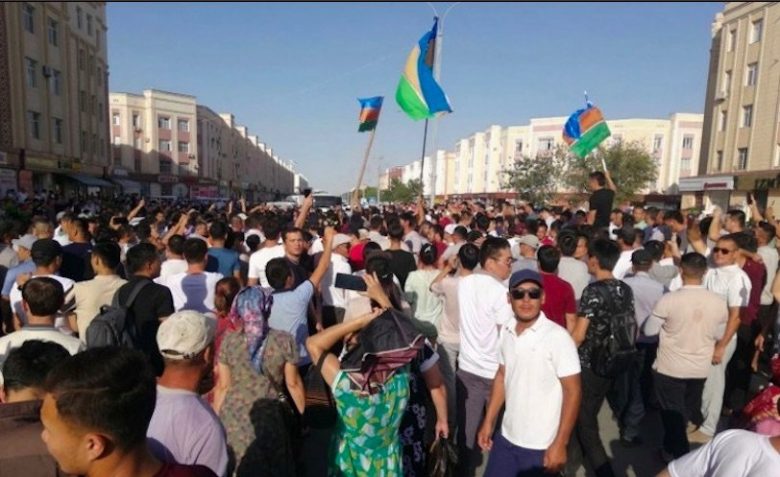 Is The US Now Trying To Destabilize Uzbekistan?

The failure of the recent attempt to create an armed conflict in the Gorno-Badakhshan Autonomous Region has not dampened Washington’s ardor in searching for ways to destabilize the situation in Central Asia.

And in creating an additional inconvenience for Russia… It looks as if the US has now set its sights on Uzbekistan.

Unfortunately, the failure of the recent attempt to create an armed conflict in the Gorno-Badakhshan Autonomous Region (GBAR) has not dampened Washington’s ardor in searching for ways to destabilize the situation in Central Asia and in creating an additional inconvenience for Russia, which at present is conducting a special military operation to de-Nazify Ukraine, by creating a “second front.” The United States, to this end, continues to use its sponsored NGOs, media and US intelligence capabilities to foment old conflicts in the region to put pressure on regional security, with a subsequent threat to Russia, as well as China. And in addition to the continuation of destructive operations in Kazakhstan, provoking instability in Turkmenistan and on the border between Tajikistan and Kyrgyzstan, there has been ethno-separatist activity on the so-called issue of Karakalpak independence.

The reason behind the erosion of the situation is the draft law “On amendments and additions to the Constitution of the Republic of Uzbekistan,” published on June 25 in parliamentary publications for a nationwide discussion, which, in accordance with the decision of the parliament of the republic, will be submitted to a referendum after July 5. The draft law itself provides for more than 200 changes to 64 articles of the Uzbek Constitution, including a clause to extend the term of office of the president of Uzbekistan from five to seven years, on the prohibition of the death penalty, as well as on the prohibition of extradition of a citizen of the country to a foreign state.

Against this backdrop, unrest was initiated in the Autonomous Republic of Karakalpakstan (which is part of Uzbekistan) on July 1 by external forces over an alleged deprivation of the autonomy of its right to secede from the country.

The Autonomous Republic of Karakalpakstan occupies 40% of the area of present-day Uzbekistan with 2 million inhabitants. The population of the rest of Uzbekistan is 33 million. The Karakalpaks are part of a group of Turkic peoples linguistically close to both Kazakhs and Kyrgyz. Because of this, in the Soviet era, this ethnic entity was considered an autonomous formation, first included as part of Kazakhstan, then Kyrgyzstan, and later the RSFSR as an autonomous republic, after which it was transferred to the Uzbek SSR. Karakalpakstan’s declaration of sovereignty was adopted in 1990, following which Karakalpakstan announced its separation from the Uzbek SSR, but this had to be approved by a referendum to enter into force. But this never happened due to the demise of the Soviet Union the following year.

After the collapse of the USSR, inter-ethnic tensions flared up in many of the new republics of Central Asia. It also occurred in Karakalpakstan, where groups demanding self-determination for the Karakalpak people arose. In 1992, the region was recognized as an autonomous republic within Uzbekistan, and the following year, the regional constitution gave the region the right to self-determination and an interstate agreement was signed saying that the Republic of Karakalpakstan would be part of the Republic of Uzbekistan for a period of 20 years. According to the agreements signed, the possibility of holding a referendum on self-determination, which was to be held in 2013, was envisaged.

Uzbekistan and the territory of this state are of significant military-political and military-geographical interest to the United States. It has especially intensified over the last year since Washington’s idea of turning Afghanistan into a foothold for expansion in Central Asia collapsed. And it is Uzbekistan that has recently begun to be of increased interest to the United States among the Central Asian republics as a state that could act as that very “foothold.”

And so, on July 1, in Nukus, the capital of autonomous Karakalpakstan, thousands of people took to the streets to protest against the proposed changes to the country’s Constitution. During the riots on a square in front of the administrative buildings of Karakalpakstan, a group of citizens tried to organize their capture. As the press service of the Ministry of Internal Affairs of Uzbekistan has announced, some citizens of Karakalpakstan, as a result of a misinterpretation of the constitutional reforms being carried out in the republic, organized unplanned marches around the city of Nukus. The ministry noted that provocateurs, using civilians, tried to split society and destabilize the socio-political situation in Uzbekistan. In order to prevent violations of public order and various offenses being committed by citizens, law enforcement agencies were involved.

To calm Karakalpak public opinion, President of Uzbekistan Shavkat Mirziyoyev arrived in the capital of Karakalpakstan, Nukus, where he stated the need to preserve articles on the autonomy of the republic in the country’s Constitution. Mirziyoyev held a meeting with parliamentary deputies and Karakalpakstan activists, and proposed rejecting changes to the articles of the Uzbek Constitution that affect the autonomous status of the republic. “Based on a study of the opinions expressed by the residents of Karakalpakstan, the president outlined the need to maintain unchanged the current versions of Articles 70, 71, 72, 74, and 75 of the Constitution of the Republic of Uzbekistan,” said Sherzod Asadov, deputy head of the Uzbek leader’s administration.

Let’s hope that this attempt by the West to destabilize the situation in Central Asia will be thwarted and the inhabitants of the region will be able to continue their lives in defiance of the criminal intentions of external opponents.