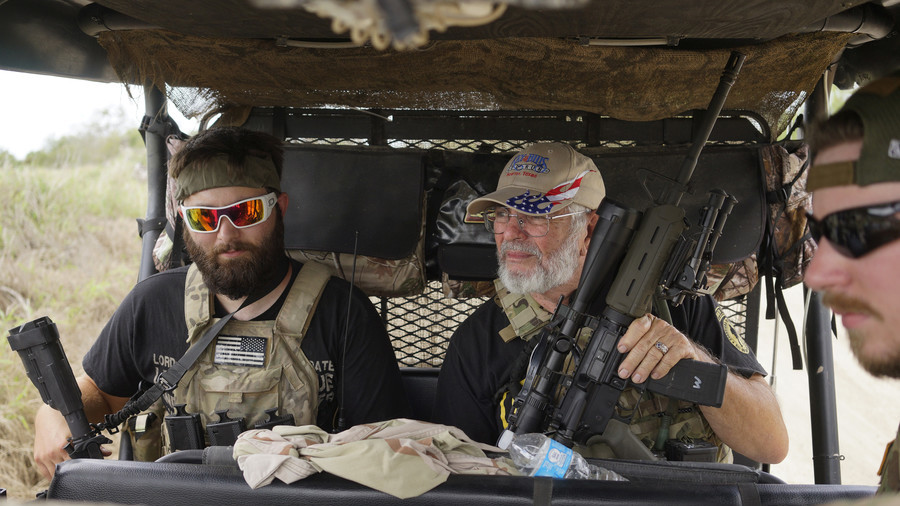 Is There Really A ‘Militia Caravan’ Traveling South To Protect US Border From Marching Migrants?

Above Photo: US militia patrolling the Mexico border in Texas ©  REUTERS/Rick Wilking

Most media outlets have published as fact claims that vigilante groups incited by Donald Trump are organizing themselves to confront the migrant caravan, but the story appears to be based on little more than an unverified boast.

Variously named as “armed militias” and “far right activists,” some “gun-toting” groups have been reported as “forming their own caravan” in scores of media reports over the weekend, from the Huffington Post to The Hill in the US to international outlets such as the UK’s the Sun, Turkey’s Anadolu, and Russia’s Sputnik.

The vigilantes are reportedly equipped with military-level tech, and will form units hundreds-strong. They have caused alarm among both local residents – afraid that their land will be invaded– and the army contingent forced to separate sides.

Now the military DOES have something to worry about at the border!https://t.co/pWzsSIqb4g

Danger at the border? You bet. But it’s coming from INSIDE THE HOUSE.
Armed militias and active military will meet at the border, a toxic mix. https://t.co/vYQmNYqjZR

Armed domestic terror organizations are heading to the border. And I’ll tell you this: I know at least one special agent with the FBI who is going there as well (and he’s not with the terrorists).https://t.co/ntz1CIfk9M

But with the 4,000-strong immigrant caravan still days away from the border, which remains relatively quiet for the moment, how are these minutemen’s plans known in advance?

Every single one of these stories primarily cites a Washington Post investigative report published on Saturday, which speaks of militias “packing coolers and tents, oiling rifles and tuning up aerial drones, with plans to form caravans of their own and trail American troops to the border.”

This information is sourced from “Shannon McGauley, a bail bondsman in the Dallas suburbs who is president of the Texas Minutemen,” a civilian border guard group.

McGauley says that 100 volunteers are “en-route to the Rio Grande” and more are coming.

“My phone’s been ringing nonstop for the last seven days. You got other militias, and husbands and wives, people coming from Oregon, Indiana. We’ve even got two from Canada,” brags McGauley, whose group on Facebook numbers 700 members.

The Washington Post does not ask him to verify his claims, while  the top border official in the Rio Grande region, Manuel Padilla Jr, tells the newspaper that they “don’t have any specific information about the militias.”

In fact, further down the article, Michael Vickers, a local rancher who himself intercepts and reports migrants crossing his lands, calls the traveling vigilantes “a bunch of guys with a big mouth and no substance to them.”

But surely the world’s media wouldn’t concoct a story of a countrywide gathering of extremists based of the words of one man with 1,700 Twitter followers, who refers to himself online by his callsign N5KOU.

Indeed, this is not the first story about the militia; that was the Associated Press report on October 27. The main source in the article: Shannon McGauley (“They’re just laughing in our face. It’s a free-for-all in America,” says the loquacious border defender there.)

McGauley isn’t standing up for his homeland alone. Indeed there is mention of one other name there: “Monica Marin, an Oregon resident, said she has raised about $4,000 online to help militias buy supplies.”Perhaps she is kitting out the drones.

Otherwise the only numbers mentioned anywhere are “a small band of men with the Patriots of the Constitution militia” who arrived in the New Mexico village of Columbus, and an “estimated 200 unregulated armed militia members currently operating along the southwest border,” highlighted in leaked Army documents from October detailing its response plan to the caravan. While some articles enlisted these 200 among the arrivals, there is nothing that suggests that these aren’t just regular border vigilantes, who would be hanging around entry points whether the Central American caravan made it or not.

And that’s it. This is not to say that there are no vigilante militias in the US, possibly exchanging emails and packing their trucks for a patriotic cross-country road trip, but as of now what we have is mostly the claims of one man.

Some might say that this is a minor enough story and there are benefits to be gained from dramatizing the threat. On the eve of the midterms, where the caravan has been ridden hard by the Republicans as a source of lawlessness, turning attention instead to role-playing Second Amendment fanatics that embarrass even the most traditionalist conservatives appears a solid strategy.

But not everyone wins. Journalism, including that of august newspapers of record, has a serious enough credibility problem without launching invisible caravans.

Secondly, if the authors of the articles believe that vigilantism is disruptive and potentially deadly, there is an ethical dimension. They can either play up the credibility of McGauley and his ilk for the short-term gain of partisan fear-mongering, and in turn boost his popularity, give him free advertising and help him recruit more men to his cause, which presumably will mean more problems for the legitimate border police and the migrants themselves. Or, with the resources the Washington Post possesses, they could investigate or challenge him to prove his claims, and discover whether he is an online blowhard who can be ignored as he fades into irrelevance. While the migrant caravan is in transit there is time left for both.