Is Washington Preparing The Groundwork For A Maidan Scenario In Venezuela?

Above Photo: From Strategic-culture.org

As this article describes, Sunday, April 6, 2019 was supposed to be another big day for US puppet, Juan Guaido, but once again nothing happened. Maybe in the coming days he will do something but it seems like more often than not when Guaido says something is going to happen, even something as minimal as a rally, it does not happen. KZ

Venezuela is home to the largest oil deposits in the world, which makes the political stakes involved much higher than they would be otherwise. Enter Juan Guaidó, Washington’s puppet leader in Caracas, who will be attempting to rally the country against legitimate (i.e., democratically elected by the people) President Nicolas Maduro next month.

Venezuelan opposition leader Juan Guaidó has announced that April 6 will kick off a nationwide “tactical actions” as part of the so-called Operation Freedom protests, which are designed to oust President Nicolas Maduro.

“On April 6 will be the first tactical actions of the # Operation Freedom across the country,” Guaidó declared over Twitter this week. “That day we must be ready, prepared and organized, with the Aid and Freedom Committees already formed. The rescue of Venezuela is in our hands!”

But first, who is Juan Guaidó? That’s a questioning worth pondering momentarily because just a few months ago, the overwhelming majority of Venezuelans – 81 percent of the population – had never heard of the young man before. That all changed when Guaidó, 35, was awakened by a phone call from none other than US Vice President Mike Pence. Literally overnight he had become the poster boy of the political opposition in Venezuela and leader of the National Assembly. “Juan Guaidó is a character that has been created for this circumstance,” Marco Teruggi, a sociologist and leading observer of Venezuelan politics, told the Grayzone. “It’s the logic of a laboratory – Guaidó is like a mixture of several elements that create a character who, in all honesty, oscillates between laughable and worrying.”

In fact, Washington recognized Guaidó more than just an opposition leader; it recognized him, without a drop of legality, as the de-jure president of the Latin American country (Just this week, Guaidó’s wife Fabiana Rosales was the guest of honor at the White House, as the media referred to her as “first lady” and “first-lady-in-waiting”).

Meanwhile, the US media has wasted no time placing the laurels on Guaidó’s young, inexperienced head, declaring the quiet coup d’ etat the “restoration of democracy” in a land where the election process, which provides its voters with a digital receipt, is considered to be the most transparent and reliable in the world. In other words, if Maduro is in office, which he is, it is due to the will of the people, not the will of Mike Pence.

So what should Venezuela expect on April 6 with the commencement of Guaidó’s organized protest? Anything is possible, but the likelihood of some sort of event or incident that will heighten the tensions in the country cannot be discounted. It certainly does not help that Trump’s national security advisor John Bolton warned in the past of “serious consequences” if any harm comes to Guaidó.

“Let me reiterate – there will be serious consequences for those who attempt to subvert democracy and harm Guaidó,” Bolton tweeted back in January. Those sorts of threats must be treated with extreme caution and due consideration. Suffice it to recall what followed like clockwork in Syria after such red-line threats were delivered about what would happen in the event of a chemical attack. Unsurprisingly, a chemical attack would eventually occur, whereupon the United States would immediately blame the event on the government, as opposed to the ragtag terrorist rebels who had infinitely more reason for resorting to such methods, and more so following such declarations from the US. In other words, should anything untoward happen to Guaidó, the West would have its perfect pretext for whatever follows next, which are better left to the imagination.

Although it appears as though Juan Guaidó’s popularity is on the wane – his motorcade was attacked by a pro-Maduro crowd just this week, while turnout for his anti-government marches has been reportedly dwindling – Caracas took the step of barring him from holding public office for 15 years due to irregularities in his financial records. According to the State Comptroller, Juan Guaidó has taken 90 international trips without indicating who provided the estimated $94,000 in expenses.

“We’re going to continue in the streets,” Guaidó responded.

Meanwhile, back in the United States, a number of government officials are taking a very unhealthy interest, if not suspicious interest, in what is happening in Caracas. Senator Marco Rubio, for example, sounds worse than any opposition figure in Venezuela, and tweets about practically nothing else than what is happening south of the border. On one particularly lamentable occasion, Rubio was delusional enough to actually post before-and-after images of former Libyan leader Muammar Gaddafi. The first showed him in power, the second just moments before being brutally murdered by a street mob. It boggles the mind to think that this man, who has a strange penchant for quoting Bible verse while fomenting for violent upheaval, stood on a platform as a Republican presidential hopeful. 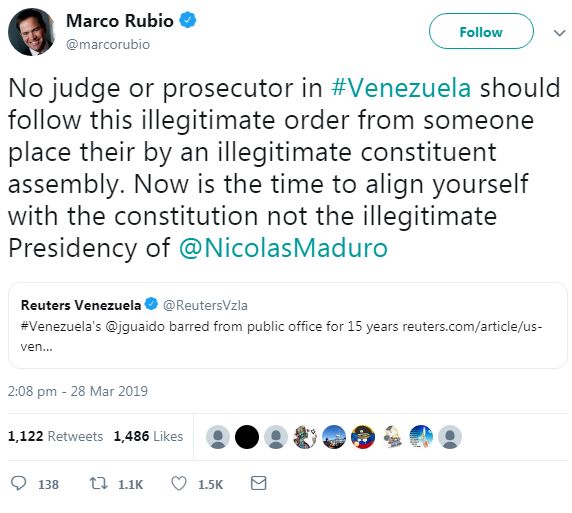 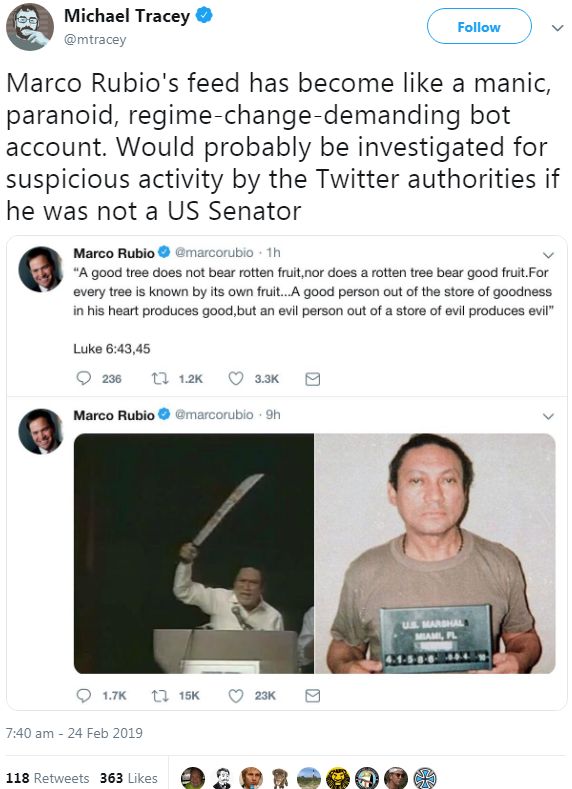 In any case, there have been several events that strongly suggest that the United States has some sort of plan to bring about the crisis that could lift Guaidó into power, as well as open up the Latin American oil industry to foreign private interests, as he has already promised to do.

First, there is the well-documented incident from last month in which a ‘humanitarian supply’ truck, attempting to cross into Venezuela from Colombia, was torched. The US quickly blamed the incident on Maduro, however, video footage seems to indicate that it was actually anti-government protesters who carried out the attack with the use of Molotov cocktails. 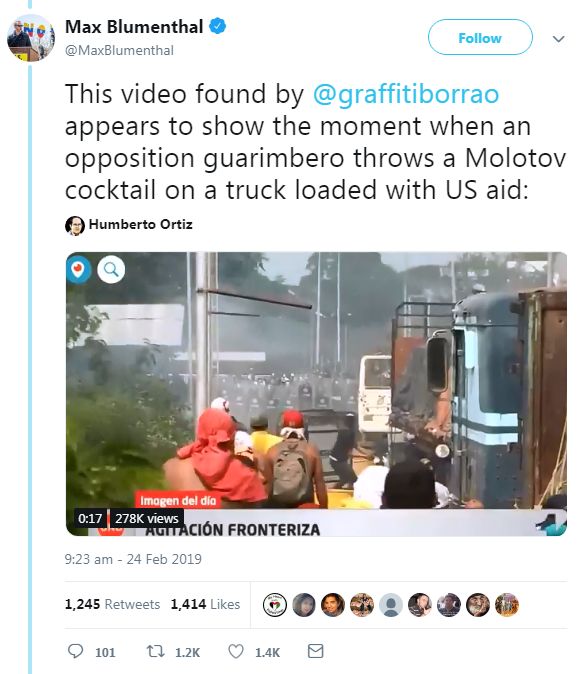 Meanwhile, the beleaguered Latin American country has suffered a spate of electricity blackouts this month, which Maduro has been quick to blame on the United States. Guaidó, of course, blamed the outages on the “incompetence” of the Maduro government. However, Maduro may be forgiven for seeing the hand of the United States every time the lights go out. In fact, such things were discussed years ago, as revealed in a Wikileaks email dump that show even during the reign of Hugo Chavez, the problem of energy supplies was considered as a crowbar to break down the government. The following email was from Stratfor, which provides intelligence analysis.

“A key to Chavez’s current weakness is the decline in the electricity sector. There is the grave possibility that some 70 percent of the country’s electricity grid could go dark as soon as April 2010… This could be the watershed event, as there is little that Chavez can do to protect the poor from the failure of that system. This would likely have the impact of galvanizing public unrest in a way that no opposition group could ever hope to generate.” 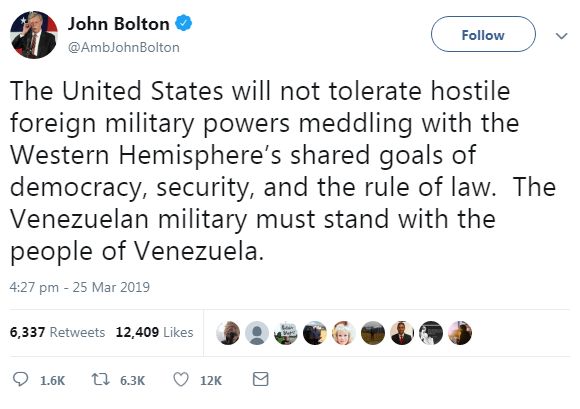 Now, to what degree, if any, the United States may be tempted to hack/attack the Venezuelan power grid is anybody’s guess, but it certainly does not seem to be beyond the realm of possibility. And this could explain why the United States is so rattled by the presence of some 100 Russian cyber specialists in Venezuela, which arrived last week.

Russian Foreign Ministry spokeswoman Maria Zakharova said Russia’s relations with Venezuela are conducted “in strict accordance with the Constitution of this country and in full respect of its legislation.”

Understandably, the last thing that Moscow would like to see is yet another regime change fiasco, this time in Caracas, similar to the one that occurred on its border in Ukraine with the Maidan uprising, which continues to wreak havoc on global relations. In that sense, the global community can only hope that common sense and scruples wins out over opportunism and rogue politics, all in the name of oil profits.