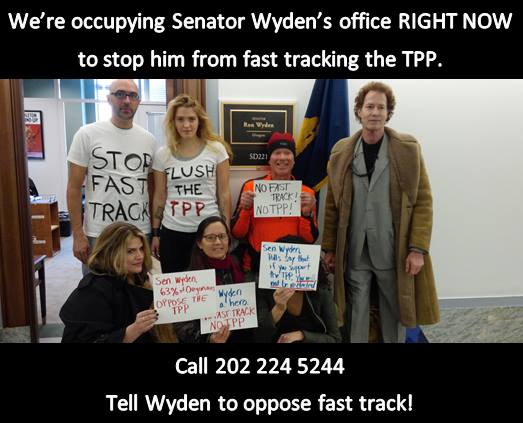 Is Wyden Moving Against Fast Track?

Note: Today we started a “Drop In & Hang Out” in Senator Wyden’s office to let him know people are watching him very closely on the issue of Fast Track trade authority. People will be participating in a rolling sit-in for most of the week.

Sen. Wyden is the ranking Democrat on the Senate Finance Committee. He has been in discussions with Senator Orin Hatch about co-sponsoring Fast Track legislation. Wyden’s constituents have been letting them know they oppose Fast Track and a poll showed that 73% oppose such legislation.

In the article below it seems Sen. Wyden is listening.  He is publicly saying that Sen. Hatch is moving to quickly toward Fast Track legislation. What he should be saying is that Sen. Hatch is moving in the wrong direction. The truth is that Fast Track cannot work with the three treaties currently being negotiated because it is impossible to achieve the objectives that Sen. Wyden says is necessary in any Fast Track legislation: (1) transparency for congress and the public, (2) participation in the process by Congress. These trade agreements have been negotiated for years and are nearing completion so how can Congress participate? Transparency would be coming too late for the public to have any input.

Fast Track must not be permitted for any of these agreements. Congress and the people need time to rethink the goals of trade and how trade should be negotiated. Transparency and participation are two keys, but we also must put people and planet before profits.

More See: Wyden If You Support Fast Track, Your Career is Toast. Share the meme below and in the top photo.

Wyden: “There is no agreement on Trade Promotion Authority, or other aspects of the legislative trade agenda more broadly.”

WASHINGTON, Feb. 20, 2015 – The Senate Finance Committee’s top Democrat, Ron Wyden of Oregon, is accusing Republicans of moving prematurely to advance President Obama’s trade agenda, including a bill to give the him the fast-track negotiating authority to finish a Pacific Rim agreement.

Wyden, who hasn’t reached agreement with Republicans on what should be in the legislation, took exception Friday to Chairman Orrin Hatch, R-Utah, scheduling a trade hearing for next Thursday.

“Today’s hearing announcement is premature,” said Wyden spokesman Keith Chu. “There is no agreement on Trade Promotion Authority, or other aspects of the legislative trade agenda more broadly.”

Wyden “is continuing to fight for more transparency, more oversight and provisions to ensure American workers come first in our trade policy,” Chu said in a reference to the disagreement over provisions of the TPA legislation. There has been considerable speculation that Hatch would release a TPA bill next week, but the statement from Wyden’s office suggests that is unlikely.

When asked last week about when his committee would bring out a TPA bill, Hatch told Agri-Pulse that “a lot depends on my colleague from Oregon,” meaning Wyden.

A spokeswoman for Hatch, Julia Lawless, said Friday that next week’s hearing is intended to give committee members “an opportunity to discuss their trade priorities for this Congress.” She said Hatch is continuing to negotiate with Wyden and House Ways and Means Chairman Paul Ryan, R-Wis., “regarding bipartisan legislation to renew job-creating Trade Promotion Authority as well as other important trade initiatives.”

The administration’s chief agricultural negotiator, Darci Vetter, said Thursday at USDA’s annual Agricultural Outlook Forum that TPA is “critical” to completing both the Trans-Pacific Partnership and a second agreement with the European Union.