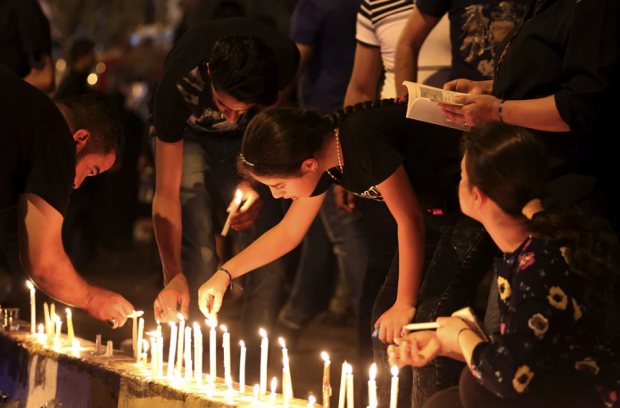 Above Photo: ‘Just as I’d lost my ability to grieve, the world seems to have lost its ability to acknowledge the death of Iraqis.’ Photograph: Hadi Mizban/AP

Outside Iraq there are no speeches made, no flags lowered in response to the almost daily terror attacks. And yet our people continue to show resilience and hope

US and coalition military forces continue to attack Isis territories in Iraq, while Iraqi ground troops prepare to retake the city of Mosul from the grip of the terrorist group. As Isis loses ground in Iraq, it escalates its violent campaign against civilians.

On Sunday, a suicide bomber attacked a security checkpoint in my home city, Baghdad, killing at least 14 people. It followed the attacks on 3 July in the same city – the city I fled to become an asylum seeker in America after losing multiple family members and friends. That attack was in the Karada district, where I spent most weekends. Within minutes, my social media accounts flooded with posts from family and friends with photos of their loved ones who were out in Karada, asking for any information on their whereabouts.

Soon after, I learned that my friend, Adel Al-Jaf, a lawyer and professional dancer who was shopping for his upcoming wedding in Karada, was one of the nearly 300 people killed in that attack. I felt overwhelmed by the news, heartbroken for Adel’s fiancée, parents and brothers, and the families of the other victims. I also felt angry for being unable to grieve and mourn death the way I could before such senseless loss became all too frequent.

People say time heals, but for my generation of Iraqis, our entire lifetime has been tainted with the wounds of war.

It has been over 13 years since the United States led a military coalition to invade Iraq, unleashing a deadly war and a deadlier aftermath which continues to unfold after claiming the lives of over 1 million Iraqis. I was going through my list of Facebook friends after Adel’s death and counted 103 other people who have been killed in Iraq during the past decade.

Despite being one of the deadliest terrorist attacks since 11 September 2001, I noticed little outpouring of emotion outside of Iraq. Few political speeches, no flags lowered or profile pictures changed. Just as I’d lost my ability to grieve, the world seems to have lost its ability to acknowledge the death of Iraqis. How does this attack differ from terrorist atrocities in the US, Germany, France, or Belgium? How many Iraqis, Afghans, Libyans, Yemenis, Syrians, Pakistanis, Bangladeshis, Sudanese, Turks, Somalis, Nigerians, Kenyans or Palestinians or others in the global south need to die for their story to warrant the attention of the west? What is the exchange rate of human life in the world’s media today?

Killing dozens or hundreds is not the ultimate goal of terrorism. These events achieve a broader goal of creating division, fear, and escalating racist and xenophobic trends that in turn help terrorists harvest more support. That’s how they really win. By ignoring attacks when they happen in Asia or Africa we fuel the narrative of this threat being one of the west against the “Muslim world”. Realising that the vast majority of victims of terrorism are Muslims demonstrates the importance of uniting against this common threat.

As an Iraqi, I was born and raised within the context of war and conflict, but I reject the notion that Iraqis are either perpetrators of violence or victims of it. Instead, I stand in awe before the resilience, strength and perseverance Iraqis continue to demonstrate in the face of decades of colonialism, dictatorship, wars, occupations, economic sanctions, political repression, sectarian bloodshed, and repeated terrorist attacks. People say time heals, but for my generation of Iraqis, our entire lifetime has been tainted with the wounds of war. How can time heal when the source of our injury has not ceased?

Within hours of the Karada attack, thousands of Iraqis gathered calling for accountability and demanding justice. Watching Iraqis take to the streets in the face of daily terror attacks breeds a unique sense of resilience and hope. Iraqis continue to aspire and work towards a better life, whether inside Iraq or as refugees and asylum seekers in a foreign land.

For me, the loss of Adel was particularly hard to accept – perhaps because of what he symbolised. Adel challenged social, political, religious, and security norms to become a dancer. He performed everywhere from the streets of Baghdad to the stage with New York-based Battery Dance Company. Adel represented the hope of a better future and was living proof that beauty still existed in Iraq, despite the growing pile of human ashes surrounding him.

I once shared a metaphor with Adel about surviving war. It’s a lot like having a broken leg that never heals perfectly – it still hurts when it’s cold, when you turn, run, climb, sometimes for no reason at all – but you learn to walk and perhaps even dance with the limp. That’s the legacy of Iraqis as I see it. In our own way, we are all still attempting to dance, just like Adel.