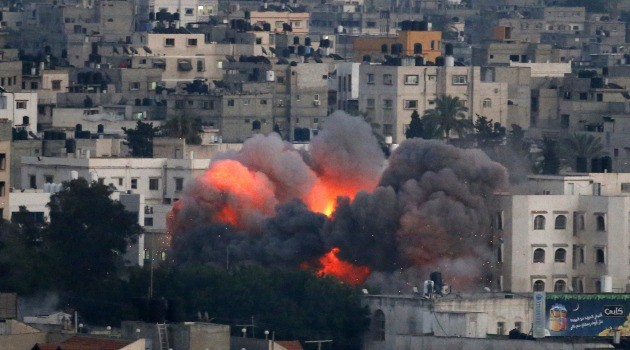 Israel Attack On Gaza Founded On Lies Upon Lies

Bloody Gaza Onslaught Built on Foundation of Politics and Lies

Israeli Military Dragged Into New Quagmire by Politics; Israel Ended Cease Fire First With Gaza but Blames Rocket Attacks; Three Kidnapped Youth Were Dead Weeks Ago, Government Knew It, but Did Not Tell Public; Kidnappers Were Not Directed by Hamas but Were a Rogue Group

In the flood of angry words that poured out of Israel and Gaza during a week of spiraling violence, few statements were more blunt, or more telling, than this throwaway line by the chief spokesman of the Israeli military, Brigadier General Moti Almoz, speaking July 8 on Army Radio’s morning show: “We have been instructed by the political echelon to hit Hamas hard.”

That’s unusual language for a military mouthpiece. Typically they spout lines like “We will take all necessary actions” or “The state of Israel will defend its citizens.” You don’t expect to hear: “This is the politicians’ idea. They’re making us do it.”

Admittedly, demurrals on government policy by Israel’s top defense brass, once virtually unthinkable, have become almost routine in the Netanyahu era. Usually, though, there’s some measure of subtlety or discretion. This particular interview was different. Where most disagreements involve policies that might eventually lead to some future unnecessary war, this one was about an unnecessary war they were now stumbling into.

Spokesmen don’t speak for themselves. Almoz was expressing a frustration that was building in the army command for nearly a month, since the June 12 kidnapping of three Israeli yeshiva boys. The crime set off a chain of events in which Israel gradually lost control of the situation, finally ending up on the brink of a war that nobody wanted — not the army, not the government, not even the enemy, Hamas.

The frustration had numerous causes. Once the boys’ disappearance was known, troops began a massive, 18-day search-and-rescue operation, entering thousands of homes, arresting and interrogating hundreds of individuals, racing against the clock. Only on July 1, after the boys’ bodies were found, did the truth come out: The government had known almost from the beginning that the boys were dead. It maintained the fiction that it hoped to find them alive as a pretext to dismantle Hamas’ West Bank operations.

The initial evidence was the recording of victim Gil-ad Shaer’s desperate cellphone call to Moked 100, Israel’s 911. When the tape reached the security services the next morning — neglected for hours by Moked 100 staff — the teen was heard whispering “They’ve kidnapped me” (“hatfu oti”) followed by shouts of “Heads down,” then gunfire, two groans, more shots, then singing in Arabic. That evening searchers found the kidnappers’ abandoned, torched Hyundai, with eight bullet holes and the boys’ DNA. There was no doubt.

Prime Minister Benjamin Netanyahu immediately placed a gag order on the deaths. Journalists who heard rumors were told the Shin Bet wanted the gag order to aid the search. For public consumption, the official word was that Israel was “acting on the assumption that they’re alive.” It was, simply put, a lie.

Moti Almoz, as army spokesman, was in charge of repeating the lie. True, others backed him up, including Defense Minister Moshe Yaalon. But when the truth came out on July 1, Almoz bore the brunt of public derision. Critics said his credibility was shot. He’d only been spokesman since October, after a long career as a blunt-talking field commander with no media experience. Others felt professional frustration. His was personal.

Nor was that the only fib. It was clear from the beginning that the kidnappers weren’t acting on orders from Hamas leadership in Gaza or Damascus. Hamas’ Hebron branch — more a crime family than a clandestine organization — had a history of acting without the leaders’ knowledge, sometimes against their interests. Yet Netanyahu repeatedly insisted Hamas was responsible for the crime and would pay for it.

This put him in a ticklish position. His rhetoric raised expectations that after demolishing Hamas in the West Bank he would proceed to Gaza. Hamas in Gaza began preparing for it. The Israeli right — settler leaders, hardliners in his own party — began demanding it.

But Netanyahu had no such intention. The last attack on Gaza, the eight-day Operation Pillar of Defense in November 2012, targeted Hamas leaders and taught a sobering lesson. Hamas hadn’t fired a single rocket since, and had largely suppressed fire by smaller jihadi groups. Rocket firings, averaging 240 per month in 2007, dropped to five per month in 2013. Neither side had any desire to end the détente. Besides, whatever might replace Hamas in Gaza could only be worse.

The kidnapping and crackdown upset the balance. In Israel, grief and anger over the boys’ disappearance grew steadily as the fabricated mystery stretched into a second and third week. Rallies and prayer meetings were held across the country and in Jewish communities around the world. The mothers were constantly on television. One addressed the United Nations in Geneva to plead for her son’s return. Jews everywhere were in anguish over the unceasing threat of barbaric Arab terror plaguing Israel.

This, too, was misleading. The last seven years have been the most tranquil in Israel’s history. Terror attacks are a fraction of the level during the nightmare intifada years — just six deaths in all of 2013. But few notice. The staged agony of the kidnap search created, probably unintentionally, what amounts to a mass, worldwide attack of post-traumatic stress flashback.

When the bodies were finally found, Israelis’ anger exploded into calls for revenge, street riots and, finally, murder.

Amid the rising tension, cabinet meetings in Jerusalem turned into shouting matches. Ministers on the right demanded the army reoccupy Gaza and destroy Hamas. Netanyahu replied, backed by the army and liberal ministers, that the response must be measured and careful. It was an unaccustomed and plainly uncomfortable role for him. He was caught between his pragmatic and ideological impulses.

In Gaza, leaders went underground. Rocket enforcement squads stopped functioning and jihadi rocket firing spiked. Terror squads began preparing to counterattack Israel through tunnels. One tunnel exploded on June 19 in an apparent work accident, killing five Hamas gunmen, convincing some in Gaza that the Israeli assault had begun while reinforcing Israeli fears that Hamas was plotting terror all along.

On June 29, an Israeli air attack on a rocket squad killed a Hamas operative. Hamas protested. The next day it unleashed a rocket barrage, its first since 2012. The cease-fire was over. Israel was forced to retaliate for the rockets with air raids. Hamas retaliated for the raids with more rockets. And so on. Finally Israel began calling up reserves on July 8 and preparing for what, as Moti Almoz told Army Radio, “the political echelon instructed.”

Later that morning, Israel’s internal security minister Yitzhak Aharonovitch told reporters that the “political echelon has given the army a free hand.” Almoz returned to Army Radio that afternoon and confirmed that the army had “received an absolutely free hand” to act.

And how far, the interviewer asked, will the army go? “To the extent that it’s up to the army,” Almoz said, “the army is determined to restore quiet.” Will simply restoring quiet be enough? “That’s not up to us,” he said. The army will continue the operation as long as it’s told.

The operation’s army code-name, incidentally, is “Protective Edge” in English, but the original Hebrew is more revealing: Tzuk Eitan, or “solid cliff.” That, the army seems to feel, is where Israel is headed.