Israel Commemorates The Assassination of Rabin With Another Massacre In Gaza

By Miko Peled,  Mintpress News
December 1, 2019
| Educate!
Israel Commemorates The Assassination of Rabin With Another Massacre In Gaza2019-12-012019-12-01https://popularresistance-uploads.s3.amazonaws.com/uploads/2017/12/popres-shorter.pngPopularResistance.Orghttps://popularresistance-uploads.s3.amazonaws.com/uploads/2019/12/palestinians-mourn-over-the-bodies-of-rasmi-abu-malhous-ap.jpg200px200px

Above: Palestinians mourn over the bodies of Rasmi Abu Malhous and seven of his family members who were killed in overnight Israeli missile strikes on their family home in Deir al-Balah, Gaza, Nov. 14, 2019. Khalil Hamra, AP.

Fresh on the heels of commemorating the killing of Israeli icon Yitzhak Rabin, Israel launched a series of attacks and assassinations on Palestinians.

My short visit to Palestine in early November began around the time of the commemoration of Yitzhak Rabin’s assassination, went through the assassination by Israel of Islamic Jihad leader, Bahaa Abu Al-Atta and his wife in Gaza, and ended as Prime Minister Netanyahu, who should be indicted for his countless crimes against the Palestinian people, was indicted for low grade corruption (valued at about $200,000), pulling strings and lying. And as always, Palestinians continue to bury their dead as Israelis bury their heads in the sand.

In a tweet following the assassination of Al-Atta, Dr. Basem Naim, Head of Council on International Relations, correctly wrote that the Israeli leadership is “pushing the area into war to escape its internal failures.” Not long after that Israel bombed both Gaza and Syria.

While it is wrong to speak ill of the dead, when the deceased is a man who represented an entire nation for over half a century, it would also be wrong to allow lies about the deceased to stand uncorrected. Contrary to common belief, Rabin did not die for peace. He spent his entire life-destroying Palestine and making the lives of Palestinians unliveable.

Rabin agreed to go along with the Oslo “Peace” Plan only because it all but ensured that Palestinians would never be able to establish a state of their own. The Oslo Accords secured Israeli control over the entire length and breadth of Palestine. Peace, so it was assumed, would be a by-product of this agreement. 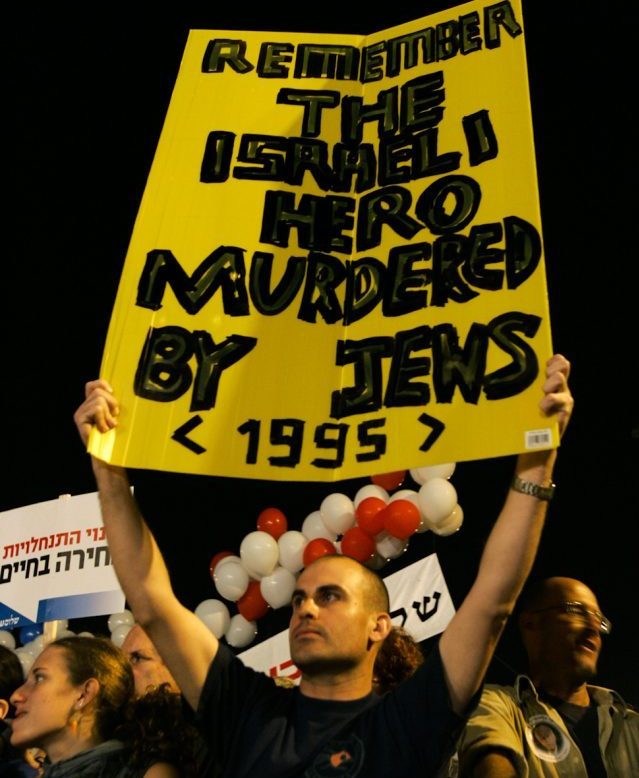 A man holds a poster during a commemoration for slain Israeli Prime Minister Yitzhak Rabin in Tel Aviv, Israel, Saturday Oct. 30, 2004. Tens of thousands of Israelis gathered to mark the ninth anniversary of the assasination, showing their continued support for the stalled peace process. (AP Photo/Peter Dejong)

Rabin was the iconic Israeli and he represented Israel’s privileged elite: he was Ashkenazi, he fought in 1948, became a general, lead the IDF, he was Minister of Defense and Prime Minister. Being an iconic Israeli, Rabin was despised and envied by everything that his assassin represented: Yigal Amir was not-Ashkenazi but rather an Arab Jew, non-privileged, he was part of the national-religious movement which makes up the West Bank settler community. It is a community that did not have any part in the “myth of the creation,” the legacy of 1948 and the founding of the state and the military but pushed forward the settlement project in the West Bank.

No two groups could be more different and despise each other more than these two.

Israelis like to believe that Rabin’s assassination was caused by his handshake with Yasser Arafat. That the signing of the Oslo Accords, which allowed Palestinians to govern themselves, albeit to a very limited degree, is why he was killed. That his death represents the sacrifice all Israelis were willing to make for peace. However, in reality, his assassination was not about that at all. It was a climactic point in the tension between the two groups represented by the assassin and his victim.

At the public ceremony commemorating the assassination, the only major figure who spoke was also a retired general, former IDF Chief, head of the Blue and White Party, Benny Gantz. He is the heir apparent to the Rabin legacy of liberal Zionism which promises to continue killing Palestinians while claiming to want peace.

What can be said about Gaza that hasn’t already been said? Well, all one has to do is to listen to the commentary on Israeli television news shows to find out. Set up like CNN, a panel of mostly men, naturally all Jewish Israeli, discuss the relations between Hamas and Islamic Jihad. One expert explained how Hamas was pleased that Israel “took out” Islamic Jihad leader Bahaa Abu al-Atta in Gaza as this helped Hamas in the competition between the two.

Comments that were tweeted by Dr. Basem Naim, former minister of health and the Head of Council on International Relations, showed a different story. The assumptions made by Israeli commentators suggesting that Palestinians would see an Israeli assassination of a Palestinian fighter as a cause for relief is indicative of the ignorance and arrogance of the Israeli media. 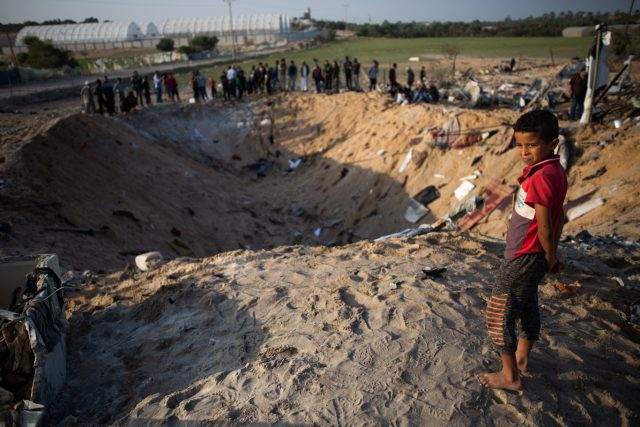 A barefoot Palestinian boy and others look into a crater made in overnight Israeli missile strikes that destroyed a house and killed eight members of the Abu Malhous family, in Deir al-Balah, central Gaza Strip, Thursday, Nov. 14, 2019. (AP Photo/Khalil Hamra)

Abu-Atta was murdered in his bed, his wife was murdered alongside him and their children were seriously injured. There is no inquiry into the legality of the assassination, the murder of Abu-Atta’s wife, or the injuries to his children. In fact, a piece in Ha’aretz, a Liberal Zionist mouthpiece, by Amos Har’el stated that “Israel had a good week,” as a result of the assassination and the massacre that followed.

The assassination was followed by a brutal attack on Gaza in which a total of 34 people were killed, including eight children. Over one hundred people were injured, among them fifty-one children. Indeed a successful week for Israel.

In order to get an understanding of the situation in Palestine, one must visit all of Palestine. In the South, Naqab Palestinian Bedouin activists are struggling under daily repression, dispossession, and arrests of activists. In a recent visit to what used to be the village of Al-Araqib, I saw Sheikh Sayagh A-Turi again for the first time since he was released from prison. With each visit, there is less and less of a village. Last time I was there at the end of 2018 there were still a few tents there. This time we sat on a blanket on the ground, under a tree.

The Israeli police have a special terrorist squad called the “Yoav Brigade.” It is a specially trained storm trooper brigade that deals with the unarmed, poor Beduin community. “They come every day and they destroy everything in sight.” I was told by village activists. “If they see a blanket they take it throwing everything on the ground, tea, coffee, water, anything they find.” The Sheikh is not permitted to be there, in his village on his land, at all. 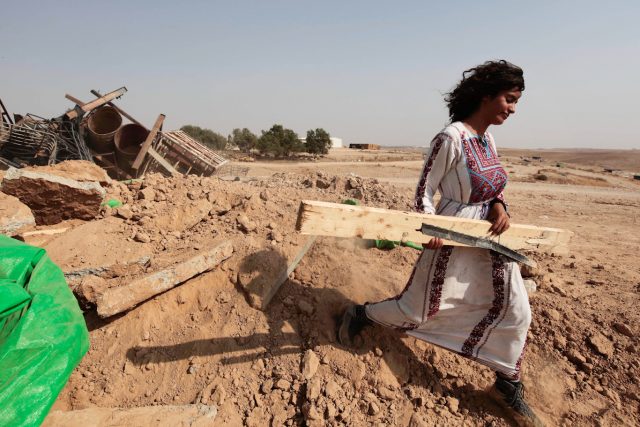 A Bedouin woman carries timber after police removed temporary shacks from the site earlier, in the village of El Araqib near the southern Israeli city of Beersheba, Wednesday, Aug. 4, 2010. Israeli police removed several shacks from El Araqib Wednesday following last week’s demolition of some 35 houses, on land the local residents identify as their property but which Israel’s government says is owned by the state. (AP Photo/Tsafrir Abayov)

Sheikh Ra’d Salah, from the 1948 Palestinian town of Umm El-Fahm is known as the leader of the currently outlawed Northern Branch of the Islamic movement. Israel outlawed the organization, known as “The Northern Branch,” in 2015. A piece by Lawrence Rubin in the Brookings Press claims, “the decision to outlaw the Northern Branch seems to have been based on political calculations, not necessarily security interests.”  Middle East Monitor reports that an Israeli court “convicted Sheikh Salah for incitement to commit terrorism. Magistrates also convicted Salah of illegal incorporation, citing his role as the leader of the Islamic Movement, which Israel outlawed for allegedly engaging in “anti-Israel activities.”

From the Naqab in the South to El-Jaleel in the north, from the Jordan Valley in the East to Yafa in the West, Palestine is occupied and Palestinians are subjected to inhumane treatment by the apartheid regime known as Israel. There was never a more important time to demand that Boycott, Divestment, and Sanctions (BDS) be enacted against Israel, and without delay.