Above photo: Israeli refusers, shortly before their imprisonment (Photo by: Keren Manor / Activestills. 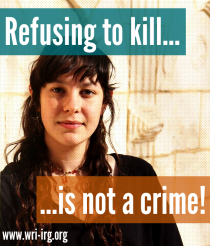 Conscientious objector Atalia Ben-Abba, 19, has been imprisoned for the fourth time for her refusal to serve in the IDF. With this final sentence, Atalia will spend 30 more days behind bars, adding to the 80 days she has already served in military prison.

Send your protest emails to the Israeli authorities here.

Hello, I am Atalya Ben-Abba, 19 years old, Jerusalemite. On Feb. 6, 2017 I will declare conscientious objection to serve in the Israeli army, and will be sent to military prison for an unknown amount of time. I’m going with full knowledge and intention to take upon myself the consequences of this act, because I believe that in order to bring safety to all of the people living here we need to change entirely government policy and end the occupation.

I grew up in Musrara neighborhood in Jerusalem. When I was little my mom and I would often walk around the Old City, which is close to our home. I enjoyed these tours, everything was so different and exciting, different sweets, dishes and a different language. And then, when I was about six years old the janitor of my school was killed in a terrorist attack. Then I understood we live in war, and that all of us – Jews and Arabs – live in fear. When mom and I went to the Old City several days later I tried hiding behind her and when she understood I’m behaving strangely she stopped me and asked what’s going on. When I told her I was afraid she scolded me and said, “What are you afraid of? There’s nothing to be afraid of, these people are like me and you and there’s no reason to feel threatened by them.” That moment was so important to me, one of the reasons that from a young age I understood we are all human beings.

In the last months I started getting involved with activity in the occupied territories. Our activity has included documenting what’s happening there and on the ground action with Palestinians. I understood for the first time the depth of the cooperation between settlers and the government. Government policy in these places is driven also by the desire to turn Palestinian life in rural areas into a nightmare, in order to force them to leave their land for crowded cities. We try to stop this process via joint struggle of Palestinians and Israelis.

I spoke once to a Palestinian activist who described the first time her met Israelis. All he saw, as a kid, were foreign soldiers, speaking a language he doesn’t understand, entering his village and demolishing houses. He feared them and was angry. Only years later he met Israelis who showed him another side. Hearing him made me understand the endless cycle we’re in – violence begets violence, there’s no solution in this way. Cooperation with Palestinians enable us to create a relationship that paves the way to peace and proves that there is a chance for partnership between the two sides for a better future.

We Israelis are also harmed by the occupation. We lead a life of fear and are controlled by a government that exploits us, and is driven by a thirst for power and wealth rather than a care for people’s well-being. Peace fulfills Israeli interests, it will enable us to live safely without fear and hatred. It’s our only chance for a good life, a life we can invest in education, health and art rather than war.

The IDF is the government’s instrument for creating and maintaining the oppression, the disenfranchisement, and the deprivation of basic rights, and so to change the situation I cannot cooperate with it. My critique isn’t directed at individual soldiers, they’re not guilty, but to those who give the orders and make policy. Racist, violent and discriminatory policy creates a reality in which Palestinians are pushed into a corner. Ignoring this is dangerous because it blinds us to the only solution – peace.

Falling into hatred is easy. It’s easy to think in terms of “us” and “them”, “good” and “bad”. My partners in struggle and I may not end the occupation, but our actions are the beginning. In order to really change things we need to take the first steps – and that’s why I must say “no!” decisively, because in this reality the only way to defend democracy is non-cooperation.

As well as filling in our email alert you can also send your emails of support to Atalia.

Use this link to write them and your messages will be passed on. You can also write to Israel’s embassies abroad. Find a list of these here.

War Resisters’ International calls for the immediate release of all conscientious objectors.