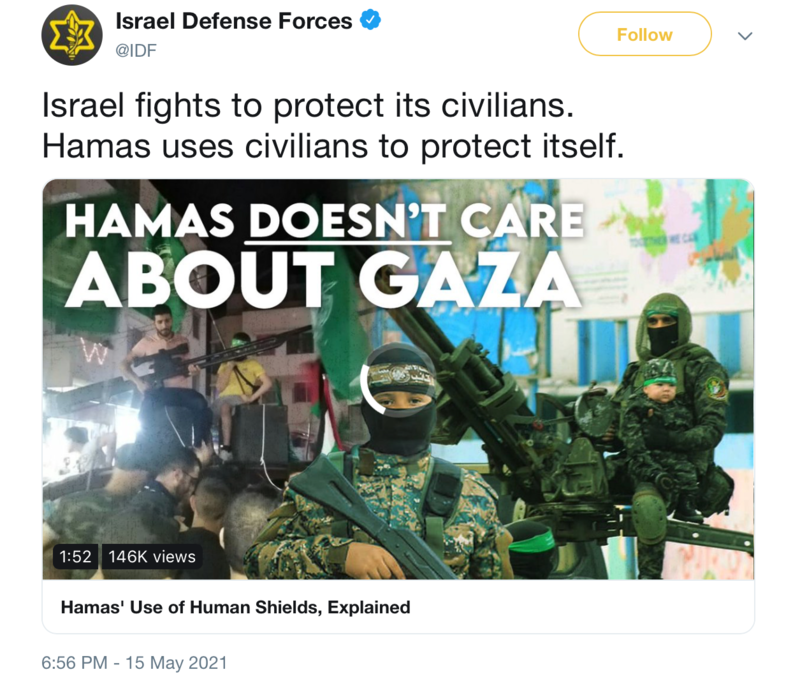 Israel Fakes Another Video Of ‘Hamas Rockets’ Next To Gaza Homes

Israel always claims to do everything possible to avoid civilian casualties when it is bombing Gaza, as it has been doing with savage intensity for more than a week.

Yet day after day, Israel has slaughtered men, women and children in their homes, regularly wiping out whole families.

The 200 people killed in Gaza since the Israeli attack began more than a week ago include 59 children and 35 women.

So the dilemma for Israel is how to square this horrific reality with its propaganda about protecting civilians.

The solution is to lie and blame the victims.

Israel’s habitual claim is that Hamas and other Palestinian resistance organizations use Palestinian civilians as “human shields,” by routinely firing rockets from residential areas, or even the rooftops of homes.

Israel got caught lying again after it posted a video on Twitter on Saturday titled “Hamas’ Use of Human Shields, Explained.”

But as Raphael Satter, a Reuters journalist observed, the video included “footage of a 2018 Israeli training exercise presented as if it had been shot recently in Gaza.”

Yesterday the @IDF published a video entitled “Hamas’ Use of Human Shields, Explained” that carried footage of an 2018 Israeli training exercise presented as if it had been shot recently in Gaza.https://t.co/RqfyotwJEL

The footage appears to show a truck carrying missiles near homes through a narrow residential street.

But as Aric Toler, a researcher with Western-government funded think tank Bellingcat observed, the truck with the missiles appears to have been a decoy being used as part of an Israeli training exercise.

And it was not filmed in Gaza.

The image is taken from a video filmed more than two years ago in the village of Abu Snan in the Galilee – about as far as you can get from Gaza within Israel.

At 0:18 of this clip, the IDF show a “missile launcher” that Hamas supposedly embeds into civilian neighborhoods. It’s actually a decoy weapon used by the Israeli military, and was filmed in northwestern Israeli.
(great eye from @razhael)

Cropped footage of the trucks from the 2018 video was used in the now-deleted Israeli army video posted on Saturday.

The Electronic Intifada was able to view the video in an archived copy in the WayBack Machine.

A caption in Hebrew says, “Trucks with ‘missiles’ took a wrong turn and entered the village of Abu Snan in the north.”

A voice on the video, that of the Arabic-speaking child who apparently filmed it, calls out, “Look guys, the rockets are here.” He sounds excited by the unusual scene.

The visibility of yellow Israeli license plates on parked cars is another clear giveaway that the video was not shot in Gaza.

Israel’s Mako news website reported on 24 November 2018 how Israeli motorists had been surprised to see a truck apparently carrying missiles on a highway near the central Israeli town of Kiryat Gat, heading towards the north.

The report includes a video apparently filmed by an Israeli motorist showing the same sort of decoy truck visible in the Facebook video.

With its lie busted, the Israeli army deleted its tweet, though an archived copy remains online.

Although the video may not play in the archived version for some readers, it had apparently garnered 146,000 views before the Israeli army deleted it.

The IDF has since deleted the tweet without explanation (archived version is available here: https://t.co/JpeGDyxxBg) but the notion that they have trouble distinguishing Hamas rockets from Israeli rockets doesn’t inspire confidence in the quality of their intelligence.

This latest fabrication is not Israel’s first during its current attack on Gaza.

Last week, Ofir Gendelman, a spokesperson for Israeli Prime Minister Benjamin Netanyahu, posted a video on Twitter claiming to show Hamas firing rockets from next to an apartment building in Gaza.

But Gendelman deleted the tweet after Twitter labeled it “manipulated media.” It had in fact been a video filmed in Syria and first posted on YouTube in 2018.

Also last week on CGTN television, I debunked the lie told by a member of Israel’s far-right Yamina party that Hamas was firing rockets from the roofs of residential buildings: