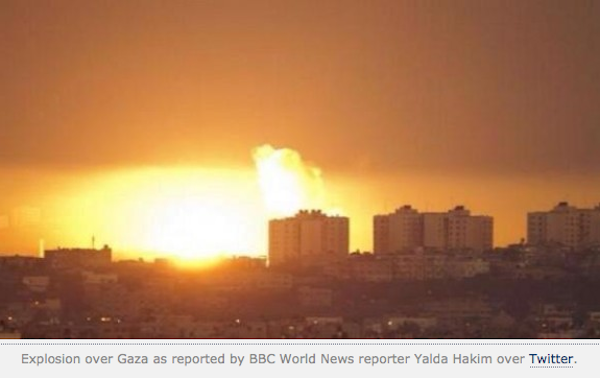 Israeli ground troops have invaded the Gaza Strip in an action that the Israeli government says is meant to destroy the network of tunnels Palestinian militants have built that lead into Israel. While the initial ground incursion may be limited to the tunnels, Israeli Prime Minister Benjamin Netanyahu’s office said in a statement that “the prime minister and the defense minister have ordered the IDF to make preparations for expanding the ground operation.”

BREAKING NEWS: A large IDF force has just launched a ground operation in the Gaza Strip. A new phase of Operation Protective Edge has begun.

“The prime minister and the defense minister have ordered the IDF to begin a ground operation in order to damage the underground tunnel terrors constructed in Gaza leading into Israeli territory,” the statement from the prime minister’s office read. The last time there was a large ground operation was in January 2009, during Operation Cast Lead, when 1,400 Palestinians, the vast majority of them civilians, were killed.

It is unclear whether what is being described as an operation to destroy tunnels will expand into a larger ground invasion. But The Independent (UK) reported that Israeli officials told them the “first step would be ‘surgical’ incursions into Gaza and then an operation to divide the Strip into three to prevent movement between the areas,” a strategy Israel employed during the Cast Lead invasion. Al Jazeera’s Gregg Carlstrom reports that “columns” of Israeli tanks have entered Gaza.

“We are moving from Iron Dome to an iron fist,” Naftali Bennett, the economy minister, said earlier today, Reuters reported.

The ordering of troops into Gaza comes hours after Palestinian militants tried to infiltrate Israel through a tunnel, but were attacked from the air. It also comes after a United Nations-requested humanitarian truce also held before the fighting started back up. Four Palestinian children were killed by Israeli air strikes today. Dozens of rockets were fired into Israel.

In the hour before the Israeli ground invasion began, the military launched heavy artillery fire into Gaza. “They’re firing from every direction, everything here is shaking,” one Palestinian from Gaza told Haaretz. Journalists in Gaza have been told to evacuate from beach-front hotels.

Meanwhile, ceasefire talks in Cairo are ongoing. Hamas’ Khaled Meshaal, its political chief, said that a ceasefire must include the lifting of the blockade on Gaza, the halting of air strikes and the release of Palestinians arrested by Israel during its operation in the West Bank, which was started in June after the kidnapping of three Israeli youths.

NBC Under Fire For Pulling Reporter Out Of Gaza