Above Photo: Israelis wave national flags outside the Old City’s Damascus Gate, in Jerusalem to celebrate Israel’s controversial piece of legislation that defines the country as the nation-state of the Jewish people. Opponents and rights groups have criticized the legislation, warning that it will sideline minorities such as the country’s Arabs. Ariel Schalit | AP

Israel’s former Chief Justice Aharon Barak recently warned that “what happened in Germany [the rise of the Nazis] can happen here [in Israel],” invoking a fierce response from Israel’s increasingly right-wing politicians.

TEL AVIV, ISRAEL — Israel’s former Chief Justice Aharon Barak stated in a recent lecture that “what happened in Germany [the rise of the Nazis] can happen here [in Israel].” He went on to say that a regime that does not respect the separation of powers or human rights cannot be called democratic. This statement brought about a swift, furious response via Twitter from Education Minister Naftali Bennet, claiming that what the Judge said was a “total lie” and that it is wrong to compare what he calls “Israel’s fight for survival in its own land” with the Nazi persecution of Jews.

The Palestinian Ministry of Health in Gaza has confirmed that over 100 Palestinians were killed in a single day during the 30th March of Return held October 19, and yet the Israeli government is being criticized from within for not being tough enough. Hard as it may be to believe — even though Israel’s ongoing response to the Gaza Return March protests can only be described as extremely heavy-handed, injuring thousands and killing hundreds — there are calls from within the Israeli cabinet and the Knesset, as well as the press, demanding Netanyahu and his defense minister Lieberman adopt a more “heavy-handed” response.

Education Minister Naftali Bennet referred to Israeli policy as “restrained” when he stated that, “the policy of restraint has failed.” He criticized the army for being too weak and called on the government to step up its attacks against what he called “Hamas-led Gaza.” Adding to these voices is former Israeli Defense Minister Ehud Barak, who stated in a radio interview that when he was in office “we killed 300 Hamas fighters in three-and-a-half minutes” and that “Prime Minister Netanyahu has surrendered to Hamas and cowers under fire.”

Now there are reports and photos of Israel amassing tanks along the Gaza border, and the Israeli cabinet is promising to “to escalate its response to any violent incidents originating from the Gaza Strip.” The Israeli papers are speculating whether or not Israel “wants” an escalation in Gaza — in other words, another massive attack by Israel.

As municipal elections draw near, campaign ads in the city of Ramle call “to keep the city Jewish” and warn of the dangers of assimilation and mixed marriages. The campaign ads show a girl in a Hijab, the traditional Muslim head cover, and the caption reads, “Tomorrow this could be your daughter.” Ramle, an ancient Palestinian city with a glorious Arab history that spans a thousand years, was destroyed in 1948 and subjected to a vicious campaign of ethnic cleansing. The few Palestinians remaining in the city today live in segregated enclaves and are governed by a municipality that wants to see them destroyed or, preferably, gone. 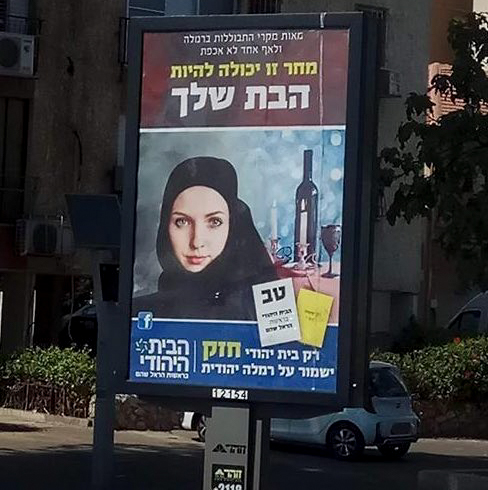 In Tel-Aviv — Israel’s metropolis by the sea, the city that is considered to be the bastion of Israeli liberalism, sunshine and fun — similar ads are displayed. In the ads in Tel-Aviv there is a photo of what looks like a Hamas fighter and the caption reads, “The Islamic movement of Yaffa, or a Jewish City. It is us or them.” 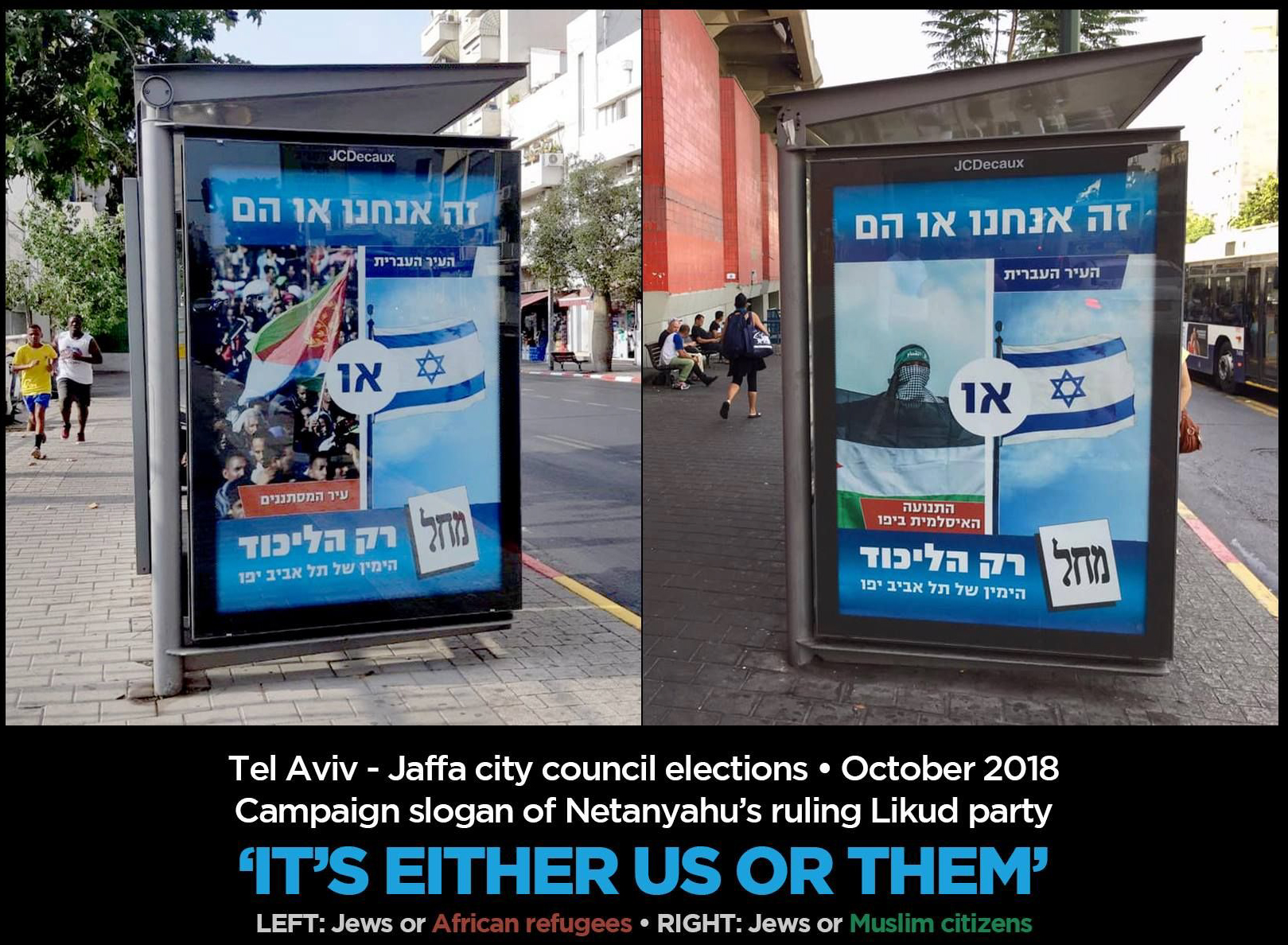 This should come as no surprise following the desperate plea made by Prime Minister Netanyahu during the last elections. He came out with a warning for Jewish Israelis to go to the polls, because “the Arabs are going to vote in droves.”

Two celebrities with Israeli citizenship — one a Jewish movie star who had a role in the hit series “Fauda;” and the other a Palestinian news anchor — recently drew sharp criticism when their wedding was revealed. They had been in a relationship that was kept secret for several years and finally decided to tie the knot. While the harshest criticism came from the most fanatic and violent Zionist member of Knesset, more “moderate” leaders joined in — including Interior Minister Ariye Der’i of the religious party Shas, and Yair Lapid of the secular “Yesh Atid” party, both of whom called the union, and mixed marriages in general, wrong.

The value of a Palestinian life?

Israel’s Tourism Minister Yariv Levin described the killing of a Palestinian woman by settlers in West Bank by as a “scrap of an incident.” He was referring to an incident in which settlers threw stones at a Palestinian car causing it to crash and resulting in the death of 47-year-old Aisha Muhammad Talal Al-Rabi.

When settlers torched the home of the Dawabsheh family in the village of Duma near Nablus, killing an 18-month old baby, not one person spent more than an insignificant time in prison, as would be expected for such a heinous crime.

Elor Azaria, a medic in the Israeli army, executed a helpless wounded man who posed no threat and was lying on the ground barely able to move. He did so in broad daylight and in front of countless witnesses who thought nothing of the matter. Azaria ended up being indicted and facing charges in a military court only because a Palestinian caught his actions on video and posted them on social media. Still, he was in and out of prison in less than eight months. Upon his release, he visited Hebron and was given a hero’s welcome.

Then there is Gaza, where the death of over one hundred civilians in a single day, not to mention three hundred in three minutes, does not raise a single word of criticism in the press or from Israeli society in general. It seems that killing Palestinians is a sure source of respect and the more one kills, and the faster one kills them, the better.

The International Holocaust Remembrance Alliance, or IHRA, has issued a definition of anti-Semitism according to which merely stating that Israel is a racist endeavor qualifies as anti-Semitism. The IHRA campaign to have its definition accepted intentionally has succeeded and several states and non-governmental agencies have adopted it. One must see this campaign in the context of the reality Israel has imposed in Palestine for over seven decades. It is a reality that cannot be described as anything but a ruthless racist endeavor.