Israel Is (Again) Pushing For War On Iran

Above photo: The scene of the attack in Damavand, near Tehran. EPA.

NOTE: Breaking – a top Iranian nuclear scientist was assassinated and people are suspicious that Israel, along with NATO countries, is responsible. See this thread of tweets by Trita Parsi where he explains why. (Click on the tweet to read the thread.)

Mohsen Fakhrizadeh, one of Iran's most important nuclear officials, has been assassinated in Tehran. This is what we know /THREAD/:

1. Israel has assassinated numerous Iranian nuclear scientists in the past but have never been able to get to the highly protected Fakhrizadeh.
>> pic.twitter.com/gThTuCW2Ik

There is a campaign to push U.S. president Donald Trump into attacking Iran before he leaves his office. It is likely that Israel’s Prime Minister Benjamin Netanyahoo, with the help of Secretary of State Mike Pompous, is the brain behind it.

The campaign started on November 16 with a New York Times piece which claimed that Trump had asked for options to bomb Iran:

President Trump asked senior advisers in an Oval Office meeting on Thursday whether he had options to take action against Iran’s main nuclear site in the coming weeks. The meeting occurred a day after international inspectors reported a significant increase in the country’s stockpile of nuclear material, four current and former U.S. officials said on Monday.A range of senior advisers dissuaded the president from moving ahead with a military strike. The advisers — including Vice President Mike Pence; Secretary of State Mike Pompeo; Christopher C. Miller, the acting defense secretary; and Gen. Mark A. Milley, the chairman of the Joint Chiefs of Staff — warned that a strike against Iran’s facilities could easily escalate into a broader conflict in the last weeks of Mr. Trump’s presidency.

It is unlikely that Trump will want to ruin his legacy by launching another war in the Middle East. He will want to run again for president in 2024. ‘America first’, avoiding wars that are of no value for the U.S., was and is one of his major selling points.

There is precedence for such an Israeli campaign. Back in 2008 Netanyahoo had also tried to push the outgoing Bush administration towards a war on Iran:

During the last days of the Bush administration in 2008, Israeli officials, concerned that the incoming Obama administration would seek to block it from striking Iran’s nuclear facilities, sought bunker-busting bombs, bombers and intelligence assistance from the United States for an Israeli-led strike.Vice President Dick Cheney later wrote in his memoir that he supported the idea. President George W. Bush did not, …

While Israel has the capabilities to attack Iran it would never dare to do so without explicit U.S. backing.

Mike Pompous, the Cheney in the current attempt to drag the U.S. along, also wants to run for president – if not in 2024 then later. He is 56 years old and can wait a few more years. He is currently trying to catch the Evangelical vote and Zionist campaign support by pleasing Israel as much as possible:

On his recent visit to Israel, Secretary of State Mike Pompeo added new sanctions against Iran while also releasing a State Department statement defending Trump’s “maximum pressure” against the Islamic Republic. He boasted about the damage being done to the Iranian economy: “The Maximum Pressure campaign against the Iranian regime continues to be extraordinarily effective. Today, Iran’s economy faces a currency crisis, mounting public debt, and rising inflation. Prior to the Maximum Pressure campaign, Iran was exporting nearly 2.5 million barrels of oil per day. Now it struggles to export even a quarter of that volume.”

The Israeli campaign for a new war has come with several rather sensational ‘leaks’ pointing to such an event:

The United States this week rapidly deployed several heavy bombers to the Middle East this week in an apparent threat to Iran, amid swirling speculation that US President Donald Trump plans to take military action against Tehran before President-elect Joe Biden enters office.
…
In a highly irregular move, the B-52H Stratofortress planes were seen flying toward Israeli airspace on Saturday en route to the base where they will be stationed, likely in Qatar. The aircraft were spotted on civilian tracking software approaching Israel before they apparently turned off their transponders, rendering them invisible on those applications.

The rotation of B-52 bombers to Qatar is far from irregular:

It was the third time in the past year and a half that B-52 bombers, which are capable of carrying nuclear weapons and other powerful munitions, have been deployed to the region in tacit threats to Iran.

The base in Qatar is the B-52s’ launching point for air support in Afghanistan. As the U.S. is currently reducing its troop numbers in Afghanistan amid a surge of Taliban activities the additional air support is called for to cover the retreat.

In typical Netanyahoo manner a recent ‘secret meeting’ between Pompous, Netayahoo and Clown Prince Muhammad bin Salman of Saudi Arabia was leaked immediately after it had happened. The fact that it was intentionally leaked makes it unlikely that the meeting was about an imminent attack on Iran:

[T]he contradictory news on Monday about such a meeting — with unsourced Israeli media reports saying it had taken place clashing with a denial from the Saudi foreign minister — highlighted the domestic politics in each country and signaled how far apart the two countries remained from the prospect of exchanging ambassadors.
…
Mr. Netanyahu, who has often been accused of leaking reports for political gain, had ample reason to trumpet any incremental steps in building relations with Saudi Arabia. He is eager to improve his standing at home as a leader who can turn Israel’s foes into friends and to divert attention from corruption allegations.The calculation is different for Prince Mohammed, who has told American visitors that he does not consider Israel an enemy but that opening official relations too quickly could inspire extremists and be used against him in a region where Israel remains unpopular.

Another Israeli ‘leak’ today is also designed to create the impression of an imminent attack on Iran:

The Israel Defense Forces have in recent weeks been instructed to prepare for the possibility that the U.S. will conduct a military strike against Iran before President Trump leaves office, senior Israeli officials tell me.
…
Senior Israeli officials tell me they expect Israel will get prior notice ahead of any U.S. strike against Iran. But they’re concerned that won’t be sufficient to fully prepare. Thus the order to the IDF to start taking preparatory steps under the assumption that such a scenario is possible.

Iran has responded to the Israeli campaign by highlighting that any attack on it would escalate into a wider war:

An adviser to Iran’s supreme leader who is a possible 2021 presidential candidate is warning that any American attack on the Islamic Republic could set off a “full-fledged war” in the Mideast in the waning days of the Trump administration.Speaking to The Associated Press, Hossein Dehghan struck a hard-line tone familiar to those in Iran’s paramilitary Revolutionary Guard, a force he long served in before becoming a defense minister under President Hassan Rouhani.

(Why is a warning of potential escalation, should Iran be attacked, characterized as a ‘hard-line tone’ instead of a matter of course?)

Iran also asked its ‘resistance’ allies to avoid provocations that could be used as an excuse for an attack:

Iran has instructed allies across the Middle East to be on high alert and avoid provoking tensions with the U.S. that could give an outgoing Trump administration cause to launch attacks in the U.S. president’s final weeks in office, Iraqi officials have said.

The order, delivered personally by IRGC foreign proxy commander Brigadier General Ismail Qaani, came a day after seven rockets had hit near the U.S. embassy in Baghdad. Publicizing the order allows to characterize any further incident as a false flag provocation.

During the last 20 years all of the many rumors about imminent attacks on Iran were products of Israeli propaganda. I do not see why this time is any different.

Israel is deterred and does not dare to attack Iran. Hizbullah, Iran’s ally in Lebanon, has enough missiles to destroy Israel’s industry. Then there is this:

Aᴍɪʀ @AmirIGM – 8:39 UTC · Nov 4, 2020Iran shows off what is essentially a Clip for launching missiles in quick succession from its underground missile cities. This mitigates the low number of launch ports at these bases and adds more possibility of overwhelming ABM systems. – video 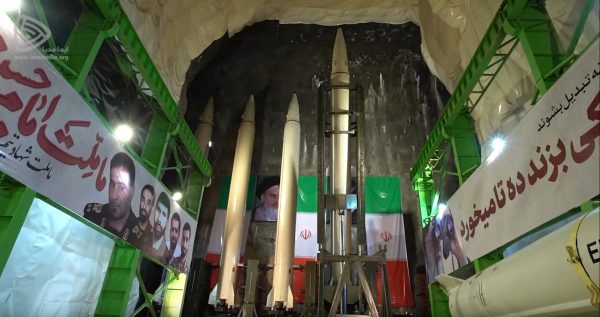 Attempts by Netanyahoo to goad the U.S. into attacking Iran have been manifold. But Trump’s legacy is on the line. I doubt very much that he will risk it for an attack that would have wide ranging and unpredictable consequences. How would it benefit him?