Above: Young Israelis sitting atop a watchtower at the Gaza border and cheering as Israeli forces fired atand killed unarmed Palestinian protesters on April 2018. Source: Twitter

In an outrageous display of inhumanity, Israeli citizens reportedly gathered on Gaza border to watch their military kill Palestinian civilians

As violence continues to rage along the Israel-Gaza border, an Israeli reporter shared a photo that could only be described as inhumane.

“Best show in town. Residents of Nahal Oz in the stands,” read the caption for the image that showed a group of young Israeli spectators sitting on an observation tower near the Israel-Gaza border line, watching and waving as unarmed Palestinians got brutally murdered and wounded at the hands of Israeli troops.

The images were later shared by Reuters as well. 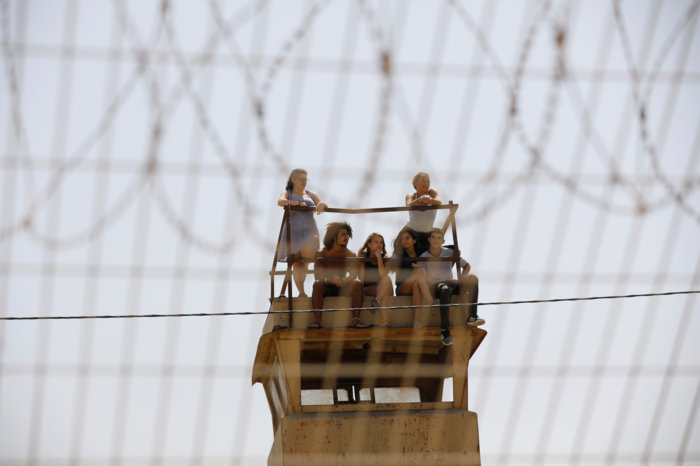 The group of people could be seen viewing the atrocities of Israeli military on Gaza as if they were viewing a movie from the top row of a cinema. Sadly, this is real life and apparently such barbaric human beings exist who actually enjoy watching people being killed.

It is so, so dangerous for Israeli civilians outside the fenced off Gaza strip that they came out to watch their military pick off protesters. https://t.co/z3vwJetNN4

Unfortunately, this is nothing new. A similar image shared earlier in 2014 showed Israeli citizens sitting on a hilltop to watch Palestinians suffer as Israeli forces dropped bombs on their homes. They reportedly clapped each time they heard a blast.

The human rights abuse at the hands of the barbaric Israeli military forces is intensifying with every passing day.

Just recently, a 30-year-old Palestinian journalist  covering the “Great March of Return” protests near the Gaza-Israel border was targeted by an Israeli sniper. He was hit in the abdomen with a bullet that later claimed his life.

Yaser Murtaja was a video journalist and a photographer, he was not a protester. The protests were supposed to be peaceful, but they soon turned violent. It is important to note the journalist was killed even though he was wearing a blue vest with the word “press” written clearly across it.

People on social media were amazed at the nasty conduct of the Israeli spectators.

I can’t stop thinking about this photo. I’m so ashamed of my countrymen.

Polls consistently show that younger Israelis are more right-wing than older Israelis: the education system has been under right-wing control pretty much their entire childhood.

This picture somehow reminds me of the Romans watching the gladiators in the Coliseums of old.

Come and see the show folks, protesters in their own country being shot, because they pose such a huge threat, we bulit this high security viewing platform right by the fence, great entertainment, popcorn and ice creams will be served during the intermission!!!

What would we as Americans do if we were displaced from our homeland as compensation for an atrocity we had nothing to do with. #justiceforthePalestinianPeople

Killing #Palestinians is now a spectacle to be enjoyed.

Last week, over 750 [now more than 1,500] Palestinians were reportedly shot by Israeli forces and at least 20 were killed as they protested the struggle they have experienced since they were expelled from their lands and their right of return.

The Israeli military said that the thousands of protesters were using the demonstration as a cover to carry out attacks, with one incident mentioning a Palestinian gunman firing toward soldiers. And yet, only Palestinians reportedly suffered injuries and deaths.

Due to the large number of people injured in this protest, last Friday was the bloodiestday in the Gaza Strip since the 2014 war between Israel and Hamas.