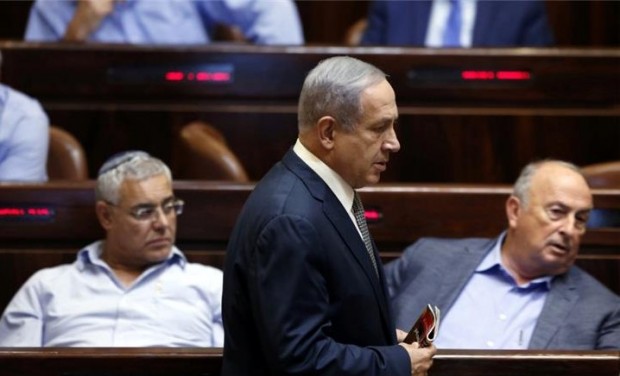 Above: Those advancing the law, including Prime Minister Benjamin Netanyahu, have done little to conceal their intention to use the measure against only Palestinian MKs [File: Ronen Zvulun/Reuters]

Israel’s parliament, the Knesset, awarded itself a draconian new power last week: A three-quarters majority of its members can now expel an elected politician if they do not like his or her views.

According to Adalah, a law centre representing the fifth of Israel’s population who are Palestinian citizens, the so-called expulsion law has no parallel in any democratic state. The group noted that it was the latest in a series of laws designed to strictly circumscribe the rights of Israel’s Palestinian minority and curb dissent.

Others fear that the measure is designed to empty the Knesset of its Palestinian parties.

“This law violates all rules of democracy and the principle that minorities should be represented,” Mohammed Zeidan, director of the Human Rights Association in Nazareth, told Al Jazeera. “It sends a message to the public that it is possible, even desirable, to have a Jewish-only Knesset.”

The four Palestinian parties in the parliament, in a coalition called the Joint List, issued an open letter on Friday warning that Prime Minister Benjamin Netanyahu and his government “want a Knesset without Arabs”.

Zeidan noted how quickly that could happen: “It would only require one Palestinian legislator to be expelled and there would be enormous pressure on the others to resign their seats in protest.”

Yousef Jabareen, a Palestinian Knesset member (MK) for the Joint List, said the law created “MKs on probation”, intimidating them into silence or “good behaviour”. Its effect, he added, would be to strip tens of thousands of voters of the right to representation.

Those advancing the law, including Netanyahu, have done little to conceal their intention to use the measure against only Palestinian MKs. The Joint List has 13 seats and is currently the third-largest faction in the 120-seat Knesset.

The legislation’s immediate target is Haneen Zoabi, a politician with the Balad party who is reviled by most Jewish MKs. The measure was originally termed the Zoabi Law.

Late last month, in a dramatic prelude to the law’s passing, more than a dozen Jewish MKs stormed across the chamber towards Zoabi as she made a speech concerning the Israeli government’s reconciliation pact with Turkey. She had to be protected by Knesset guards.

She had outraged the MKs by referring to the “murder” of 10 humanitarian activists by Israeli commandos in 2010. The Israeli navy attacked an aid flotilla, in which Zoabi participated, as it sailed in international waters from Turkey to Gaza. The incident led to the split with Ankara.

Rather than criticise the Jewish MKs, Netanyahu said Zoabi had “crossed every line” with her comments against the commandos and there was “no room for her in the Knesset”.

Similarly, opposition leader Isaac Herzog called for all of Zoabi’s speeches to be censored from the Knesset TV channel.

Celebrating the law’s passage, Netanyahu posted on social media: “Those who support terrorism against Israel and its citizens will not serve in the Israeli Knesset.”

Zeidan said the new law was a “dangerous escalation” in a wider trend of suppressing dissent and inciting hatred. “We are entering a new era. Before, there were racist laws and policies, but now we are heading rapidly towards outright fascism.

“The constant incitement against the Palestinian minority from the prime minister down moves this on to the street, where there will be more violence and more attacks from the Jewish public on Palestinian citizens.”

Zoabi was reported to have refused a Knesset bodyguard this month, even though the level of threats against her required it, according to Israeli police.

Proceedings against a politician can be initiated with the backing of 70 MKs. An expulsion will be carried out if 90 MKs find that the politician either incited racism or supported armed struggle against Israel. There is no definition in the legislation of what constitutes “support”.

The Knesset will be able to take into account the legislator’s statements – and the majority’s interpretation of them – and not just actions or stated aims, noted Adalah.

Until now, a politician could be removed from the Knesset only if convicted of a serious crime.

Netanyahu spearheaded the legislation in February after Zoabi and her two Balad colleagues in the Knesset, Jamal Zahalka and Basel Ghattas, met a dozen Palestinian families from occupied East Jerusalem whose sons had been killed either during lone-wolf attacks or in clashes with security services. The three MKs promised to help put pressure on the government to return the bodies for burial.

Israeli officials claimed the visit was tantamount to support for “terror”. The three were suspended from the Knesset for several months. Under the new law, they could be permanently expelled.

Zahalka, leader of the Balad party, said Palestinian MKs would face a “kangaroo court, where hostile MKs serve as judge and jury”.

He said the Joint List faction was preparing to send a letter to the Inter-Parliamentary Union, an organisation representing 170 parliaments worldwide, urging it to oust the Knesset from membership.

Given the large majority needed for an MK’s expulsion to take place, some have claimed the new law will be nearly impossible to implement.

Zahalka disagreed. He told Al Jazeera: “If you see a gun in the first act, you know it will be used in the last act. And so with this law. When we have the next ’emergency’ or the next war, Jewish MKs – even those who now criticise the law – will rally to expel those who are outside the consensus.”

Zoabi has found herself repeatedly rounded on by almost all the Jewish parties in the Knesset.

In the summer of 2014, during a major Israeli attack on Gaza, the Knesset’s ethics committee suspended her for a record six months – the longest period then allowed.

During an Israeli radio interview, she had criticised Palestinians behind the abduction of three Israeli youths in the occupied West Bank, but refused to call them “terrorists”. The Israelis were later found dead.

Zahalka said Palestinian MKs now faced an “extraordinary” situation. “In every country, parliamentary immunity confers on legislators greater rights than ordinary citizens to help them carry out their parliamentary duties,” he said. “Only in Israel will elected representatives have more restricted freedom of speech and action than ordinary citizens.”

The expulsion law follows the outlawing last year of the northern Islamic Movement, the largest extra-parliamentary movement among the Palestinian minority in Israel. Its head, Sheikh Raed Salah, is considered a spiritual leader to a large section of the community.

At the time, Netanyahu hinted that the Islamic Movement was linked to “terror” activity. Leaks from government ministers to the Haaretz newspaper, however, revealed that the Israeli security services had found no such ties.

Zeidan observed that the Israeli right had been waging a battle to rid the Knesset of Palestinian parties for some time.

Over the past 15 years, the Central Elections Committee, which is dominated by Jewish parties, has repeatedly tried to ban Palestinian MKs from standing for election. However, the Israeli Supreme Court overturned the decisions on appeal.

In 2014, the government tried a different route. It passed a Threshold Law, raising the proportion of votes needed to win a place in the Knesset. The threshold was set too high for the four small Palestinian parties to clear it.

The move, however, backfired. The parties responded by forming the Joint List and became one of the largest blocs in the Knesset after last year’s general election.

It was in this context, noted Zeidan, that on the eve of the election, Netanyahu made his much-criticised comment warning that “Arabs are coming out in droves to the polls”.

Asad Ghanem, a politics professor at Haifa University, told Al Jazeera that the expulsion law might realise for Netanyahu his stated goal of discouraging participation by the Palestinian electorate. Turnout had fallen to barely more than half of the minority’s voters before the Joint List’s creation in time for the 2015 election.

“If we see these attacks on Arab representation in the Knesset continue,” Ghanem said, “then voters may conclude that enough is enough and that it is time to withdraw from the political game.”