According to a lawsuit against the company, a Psy-Group operative registered outlawbds.com, a website that reportedly named and shamed supporters of the anti-Israel boycott effort

Psy-Group, a mysterious Israeli company that is reportedly being investigated by the FBI in connection with Special Counsel Robert Mueller’s probe into alleged illegal interference in the 2016 US presidential election, was also involved in covert anti-BDS efforts, according to a lawsuit against the company and multiple sources who spoke to The Times of Israel.

BDS is a campaign by some pro-Palestinian activists encouraging people to boycott, divest from and sanction Israel over what they call its ill-treatment of the Palestinians.

Psy-Group, which operates in Israel under the name Invop Ltd, is a self-styled leader in “intelligence and influence” which boasts in its marketing material of its covert techniques and capabilities. Its founder and co-owner Joel Zamel was reported by the New York Times last month to have met with Donald Trump Jr. three months before the November 2016 US presidential elections, offering to assist his father’s campaign, and the company was reported to have drawn up “a multimillion-dollar proposal for a social media manipulation effort to help elect Mr. Trump.”

While a lawyer for Zamel denied that he or any his companies had any involvement in the US election campaign, Bloomberg News has reportedthat Special Counsel Mueller’s team is investigating flows of money into Psy-Group’s Cyprus bank account, and also that Psy-Group formed an alliance with Cambridge Analytica, a (now collapsed) company that the Trump campaign consulted on social media issues, following Trump’s election.

Psy-Group’s marketing materials highlight its “professionalism, legality and discretion,” and little is publicly known of its activities, but a Canadian legal battle has shed some light on its practices, including its alleged work to counter anti-Israel BDS activities.

In the course of its investigation into the tactics allegedly used by Black Cube and Psy-Group, West Face discovered that a Psy-Group operative registered the website outlawbds.com, West Face’s complaint alleges.

Outlawbds.com has disappeared from the internet, but some BDS proponents have claimed that the site contained a “blacklist” with photos and email addresses of individuals believed to support BDS. 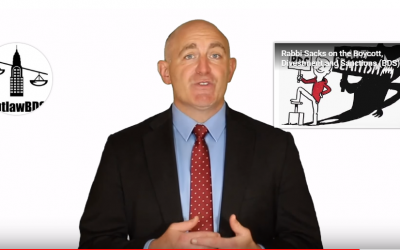 Other BDS supporters report having received an email in September 2017 from the email address admin@outlawbds.com warning them: “Be aware that you have been identified as a BDS promoter. According to new legislation in New York State, individuals or organizations that engage in or promote BDS activities with US allies will no longer receive public funding or support. Moreover, the state and its agencies will no longer engage in business or hire these organizations and individuals as they have been deemed problematic and anti-American. You have been marked. You have been identified. You have a limited window of opportunity to cease and desist or face the consequences of your actions in legal proceedings. In case you have ceased your past wrongdoing, please contact us at admin@outlawbds.com for your profile to be removed from the Blacklist.”

The Times of Israel was told by multiple sources that Psy-Group worked to counter BDS activists — and is one of several such firms, set up by or employing former Israeli intelligence operatives, that do so.

Such work, The Times of Israel was told, is known to the Israeli government, and specifically the Ministry of Strategic Affairs, but is not paid for by the government. 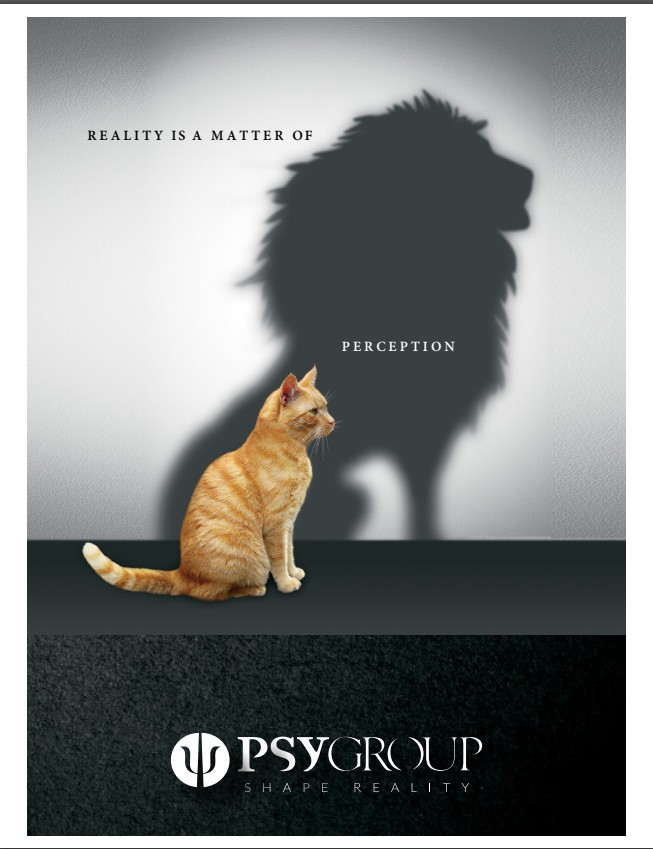 The sources said that such companies engage in various undercover activities against BDS leaders and activists. This work includes highlighting the sources of funding for BDS activities if such funding is obtained from terrorist or other banned organizations, and making public instances where activists have expressed extremist and/or anti-Semitic views. The goal can be to deter the activists from continuing their activities, the sources explained.

In the case of Psy-Group, The Times of Israel was told but could not independently verify, its anti-BDS work was financed by private donors, and the firm did not engage in illegal activity, did not disseminate false information, and did not engage in hacking.

It briefly asserts that the Psy-Group operative who registered the outlawbds website went on to hire one “Amin Razvi (‘Razvi’), an individual residing in India,” to carry out work related to outlawbds.com.

The main thrust of the document deals with the alleged “defamation campaign against West Face,” as carried out by Psy-Group and Black Cube. Razvi worked for Psy-Group on that campaign, the document claims, posting defamatory content about West Face online. 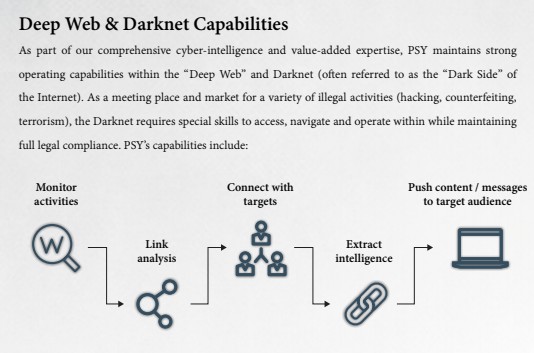 Detailing the alleged activities of the two Israeli companies, the complaint claims that operatives from both Black Cube and Psy-Group “conspired to provide reporters, news agencies (including the National Post, Bloomberg News and the Associated Press), as well as others, with edited, distorted or otherwise falsified recordings and/or transcripts of meetings between operatives of Black Cube and its targets, including current and former employees.”

West Face learned of Black Cube and Psy-Group’s activities when its employees recognized the image of Stella Penn Pechanac in news reports about rape and harassment accusations against Hollywood mogul Harvey Weinstein. Pechanac was a Black Cube employee who reportedly posed as a woman’s rights activist and who befriended actress Rose McGowan in a bid to gather intelligence on behalf of Weinstein. Employees of West Face recognized Pechanac as the same woman who had reached out to them.

Several affidavits by employees and former employees of West Face Capital allege that Stella Penn Pechanac approached them, using various aliases, offering unique and exciting employment opportunities and in some cases flying them to London for fake job interviews. Black Cube operatives then allegedly plied some of these employees with alcohol in an attempt to extract information that would benefit their client in its legal proceedings.

In one instance, a Black Cube operative is alleged to have tried to entrap a retired Canadian judge into making anti-Semitic comments. According to the plaintiffs, the hope was to discredit a verdict the judge had handed down against Black Cube’s client, Catalyst, whose managing partner is Jewish.

In response to a Times of Israel request for comment, Black Cube sent the following statement: “It is Black Cube’s policy to never discuss its clients with any third party, and to never confirm or deny any speculation made with regard to the company’s work. Referencing Black Cube has become an international sport during 2018. It is important to note that Black Cube always operates in full compliance of the law in every jurisdiction in which it conducts its work, following legal advice from the world’s leading law firms.”

In a separate matter, Black Cube was accused last month of working to slander Obama administration officials involved with the Iran nuclear deal as part of a covert effort to discredit the multinational accord. It denied the allegation.

Psy-Group is currently in bankruptcy proceedings in an Israeli court.

The publicly available bankruptcy filings, in which 29 of the Psy-Group’s employees have requested that the firm be liquidated, contain various hitherto unpublished details about Psy-Group, its activities and employees.

In Israel, Psy-Group operates under the name Invop Ltd., which according to Israel’s corporate registry was founded on December 22, 2014. Its chief executive officer is Royi Burstien, the former commander of an Israeli psychological warfare unit, according to Bloomberg. All of Invop’s shares are owned by a Cypriot company called IOCO Ltd., which in turn is owned by a British Virgin Islands company called Protexer Limited.

According to the petition by Psy-Group employees, dated February 28, 2018, employees were informed the previous week that they would not receive their February salaries because “two critical business developments had failed.” As a result, the company had fallen into a credit crunch and would be unable to pay its employees their February salaries, or, for that matter, continue to operate. The company’s director, Burstien, did not object to the bankruptcy proceedings initiated by employees and on May 21, the court appointed a special administrator for the company.

The majority of Psy-Group’s 29 employees listed in the petition appear to be young recent university graduates. A perusal of their LinkedIn pages reveals that many attended the Interdisciplinary Center in Herzliya, an elite private college near Tel Aviv, and many served in intelligence units in the Israel Defense Forces and other Israeli security services, although not necessarily in senior roles.

Despite her relative youth, at least one employee of Psy-Group earned a salary that is more than three times the Israeli average of NIS 10,300 a month: The petition includes the pay stub of an employee whose job title was “project manager” and whose gross salary was NIS 33,0363.

A few names on the list stand out. One of the petitioners is Emmanuel Rosen, a former Israeli journalist. Contacted by The Times of Israel, he had no comment on this article.

Also on the list of Psy-Group employees is Eitan Charnoff, who in 2016 was the director of iVote Israel, a controversial get-out-the-vote campaign for Americans in Israel. He directed iVote Israel at the same time that he worked at Psy-Group. “Eitan Charnoff is not currently involved with either independent organization so is not in a position to comment on anything related to either entity,” said his attorney Carrie H. Cohen of Morrison & Foerster LLP. 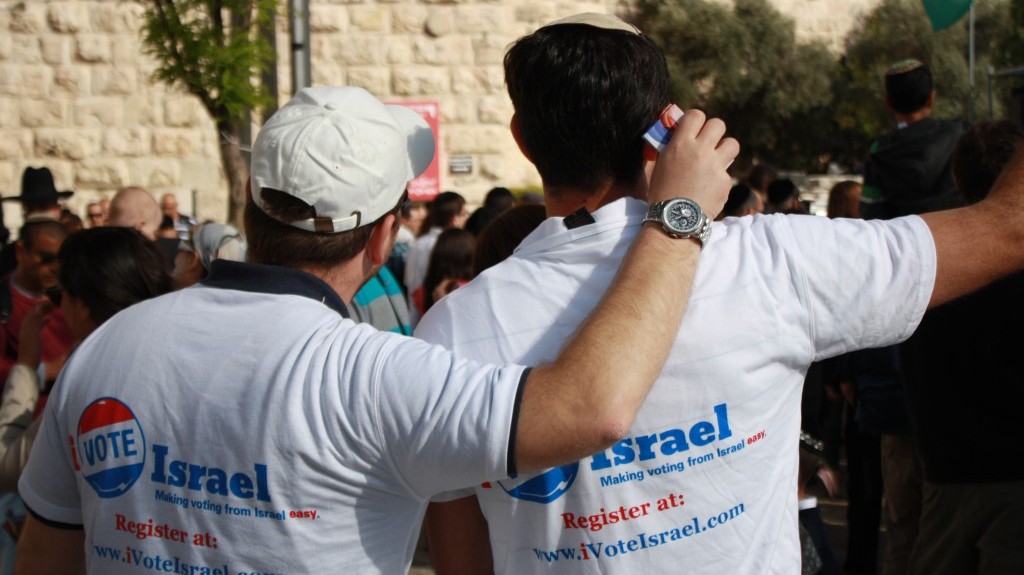 iVoteIsrael volunteers sign up US citizens for absentee ballots at a mall in Jerusalem in June 2012 (photo credit: courtesy of iVoteIsrael.com)

Israeli-Australian Paul Vesely, who is not one of the petitioners, but who claimed in his LinkedIn page to have been one of the founders of Psy-Group, was previously the chief operating officer at Veribo, a company that provided online reputation management services to binary options companies. He had not replied to a request for comment at the time of publication.

In addition, four previous Psy-Group employees listed in Invop Ltd’s bankruptcy filings currently work for a company called Cyabra, whose stated mission is to help identify sockpuppets and fake Facebook profiles for organizations that have been targeted by fake comments. Cyabra had no comment on this article.

Psy-Group had not responded to a request for comment at the time of publication.