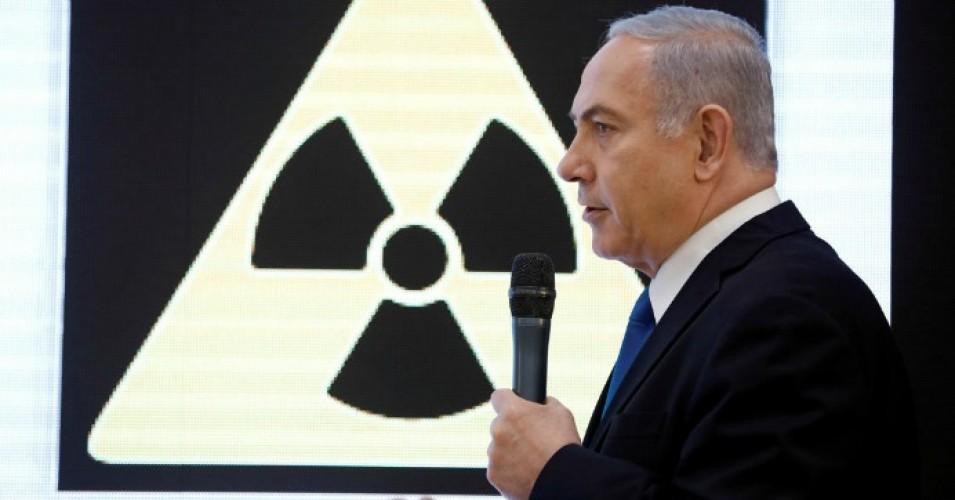 Israeli Hypocrisy Has Nukes, Ignores Law But Calls For Attacks On Nuke-less Iran

Above Photo: “I just want someone in a position of power in this country to call out Israel for its nuclear weapons,” Medea Benjamin, co-founder of CodePink, told Common Dreams in an email. (Photo: Reuters)

Israel’s claims are being met with disbelief by experts in the field. Telesur summarizes the reaction writing “After Netanyahu’s speech the International Atomic Energy Agency said it has “no credible” evidence Iran was developing a nuclear arms since 2009.” Al Jazeera describes them as lies already disproven by the International Atomic Energy Commission

Mohammed Javad Zarif, the Iranian foreign minister, rejected claims writing on his official twitter account “BREAKING: The boy who can’t stop crying wolf is at it again. Undeterred by cartoon fiasco at UNGA [UN General Assembly]. You can only fool some of the people so many times.”

Israel timed the release just days before Trump’s deadline on whether to fulfill US obligations under the nuclear agreement and just after German and French leaders met with Trump seeking to convince him to stay in the agreement.

Telesur reports “International and Israeli experts said Netanyahu had presented no evidence Iran was in breach of the deal. Rather, it appeared the presentation, delivered almost entirely in English, was composed as an Israeli prelude to Trump quitting the accord.”

“Indirectly responding to the Israeli accusations, the International Atomic Energy Agency (IAEA) said Tuesday it has “no credible” evidence Iran was working on developing a nuclear “explosive device” after 2009 and that the U.N.’s nuclear watchdog considered the issue “closed” after it was presented in a report in December 2015.

“A 2007 U.S. National Intelligence Estimate judged with “high confidence” that Tehran halted its nuclear weapons program in the fall of 2003. The IAEA later reached a similar assessment.

“One Vienna-based diplomat who has dealt with the IAEA for years, when asked what he made of Netanyahu’s speech, said: ‘Nothing new. Theatrics.’”

Israel has hundreds of nuclear weapons, no inspections and no adherence to any nuclear treaty threatens Iran on nuclear weapons when Iran has no nukes and is abiding by the nuclear agreement

“How can this hypocrisy continue, with Israel having hundreds of nuclear weapons, no inspections and no adherence to any nuclear treaty calling out Iran on nuclear weapons?”

As Israeli Prime Minister Benjamin Netanyahu hit the U.S. media circuit on Tuesday to regurgitate claims he laid out in his “bizarre” speech accusing Iran of violating the nuclear accord, journalists and non-proliferation advocates worked to call attention to the fact that there is only one nation in the Middle East that already possesses nuclear weapons but refuses to acknowledge them: Israel.

“The only country in the Middle East with a proven, clandestine nuclear weapons stockpile is . . . Israel. And the rogue state refuses to join the [Nuclear Non-Proliferation Treaty].”
—Glenn Greenwald, The Intercept

“I just want someone in a position of power in this country to call out Israel for its nuclear weapons,” Medea Benjamin, co-founder of CodePink, told Common Dreams in an email. “How can this hypocrisy continue, with Israel having hundreds of nuclear weapons, no inspections and no adherence to any nuclear treaty calling out Iran on nuclear weapons? It is because Israel is good and Iran is evil? Ask the people of Gaza about that one.”

A striking example of Israel’s hypocrisy and refusal to confirm what virtually the entire international community has known for decades came when Netanyahu was asked about his country’s nukes Tuesday morning by CNN‘s Chris Cuomo—a question that notably didn’t come up in the prime minister’s earlier softball interview on “Fox & Friends.”

“Does Israel have nuclear capabilities and nuclear weapons, yes or no?” Cuomo asked.

Netanyahu offered an evasive response, claiming “we’ve always been the first to say we wouldn’t introduce it so we haven’t introduced it.”

After Cuomo continued to press for a “yes or no answer,” Netanyahu said, “That’s as good an answer as you’re going to get.”

As The Intercept‘s Glenn Greenwald noted in response to the exchange between Cuomo and Netanyahu, the inconvenient fact that Israel continues to shroud its own nuclear stockpile in secrecy as it levels accusations against Iran—which, unlike Israel, allows inspectors to examine its nuclear facilities to ensure they’re being used for peaceful purposes—is “typically ignored” by America’s corporate media outlets.

Kudos to @ChrisCuomo for pressing Netanyahu on that little uncomfortable fact that is typically ignored: the only country in the Middle East with a proven, clandestine nuclear weapons stockpile is . . . Israel. And the rogue state refuses to join the NPT https://t.co/giuIE0Przz https://t.co/IJwFkuJ9E9

After journalists quickly noted that this assertion was false, the White House quietly changed “has” to “had” and said the inaccuracy was the result of a “clerical error.”

In a tweet on Monday responding to the Trump administration’s statement, Ploughshares Fund president Joe Cirincione noted that it is Israel, not Iran, that has repeatedly attempted to hide its nuclear capacities.

May I just point out that #Israel had a robust, clandestine nuclear weapons program that it tried and failed to hide for years. They repeatedly and consistently lied to US officials when confronted with the evidence.