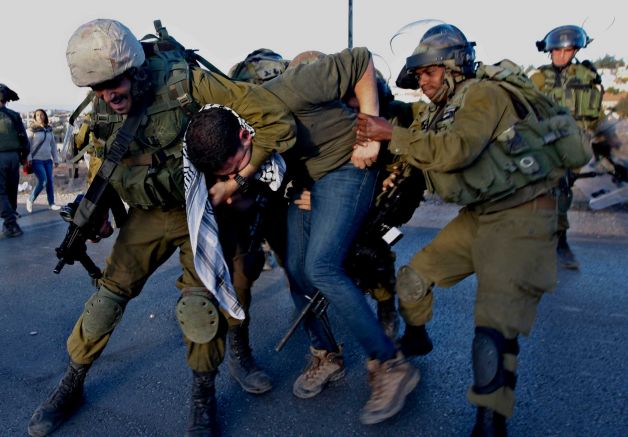 NAZARETH (Ma’an) — Hundreds of protestors participated in a large demonstration in Haifa on Saturday against the Prawer Plan as part of a global “Day of Rage.”

Many protesters were detained as Israeli police violently dispersed the crowds in the northern Israeli city, and clashes continued into the evening.

Protests took place on both sides of the Green Line as well as worldwide, as Palestinians, Israelis, and internationals protested in Israel, the West Bank, Gaza and in at least 14 other countries in Europe and the Arab World against the plan to forcibly relocate tens of thousands of Palestinian Bedouins.

Israeli forces dispersed protesters in Haifa with water cannons and detained many others after Israeli police claimed that protesters threw rocks at them.

A statement from the Youth Movement in Haifa referred to the protest as a “Day of Rage against the Prawer Plan, which entails the confiscation of 800 dunams of land, displacing 70,000 people from the Negev, and destroying 38 stolen villages.”

The statement also referenced other “Days of Rage” which have taken place in protest so far this year, saying, “we went out on the fifteenth of July, and the first of August, and imposed our single, united position in defiance of the lowly Israeli Police which brutally assaulted people, young men and woman, injuring and arresting dozens.”

“Prawer will not pass,” it added.

“This is the definitive, conclusive word of people, and just as we went out to the street in the past, we do it again now.”

Anti-Prawer demonstrations were also held in other cities across Israel, particularly in the majority-Palestinian towns of Taybeh, Sakhnin and others.

Earlier in the day more than 1,000 protested in the Negev town of Hura.

Ahmad al-Tibi, a member of the Israeli Knesset who was in attendance at the Hura protest, told Ma’an that “the protest was meant to emphasize that Prawer will not pass on the ground, even if it does in the Knesset, because it’s essential goal is to displace the indigenous Arabs from their towns.”

Al-Tibi added that the “resolution will not be respected because it is racist.”

The demonstrations were part of at least 24 protests against the Prawer Plan worldwide that took place on Saturday.

The Israeli government approved the Prawer-Begin Plan in 2011, in what it says was an attempt to address the problem of unrecognized Bedouin villages in the Negev desert of southern Israel.

According to the Association for Civil Rights in Israel, the plan will forcibly evict nearly 40,000 Bedouin and destroy their communal and social fabric, condemning them to a future of poverty and unemployment.

Other estimates put the number of Bedouin residents to be evicted by the Prawer Plan at 70,000.

The Israeli government denies them access to basic services and infrastructure, such as electricity and running water, and refuses to place them under municipal jurisdiction.