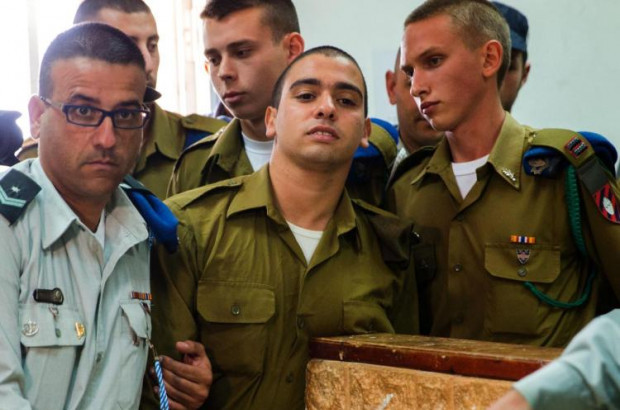 Israeli Soldier Is Convicted Of Manslaughter

Update: Israeli Prime Minister Netanyahu has called for a pardon of the Israeli medic who was convicted of manslaughter today in the killing of an incapacitated Palestinian, a story that is generating headlines around the world. Haaretz translates Netanyahu’s statement in part:

“This is a difficult and painful day for all of us – and first and foremost for Elor [Azaria] and his family, for IDF soldiers, for many soldiers and for the parents of our soldiers, and me among them…. We have one army, which is the basis of our existence. The soldiers of the IDF are our sons and daughters, and they need to remain above dispute.”

Netanyahu reportedly does not have the power to pardon; though President Reuven Rivlin does.

Sgt. Elor Azaria was convicted today by a military court in Jaffa of manslaughter for the execution of Abdel Fatah al-Sharif as he lay incapacitated in the street in Hebron last March, and there were immediate calls from Israeli political leaders and the public for the 20-year-old soldier to be pardoned. The story was the lead on BBC, and the New York Times and Washington Post also promptly put up the news.

B’Tselem, the human rights organization whose video unleashed the investigation, said the case was the rare exception in which an Israeli soldier was held accountable for a human rights atrocity. There is “routine whitewashing of cases in which security forces kill or injure Palestinians with no accountability,” it said.

Amnesty International reached the same conclusion: The conviction “offers a small glimmer of hope” that others will face accountability “amid the rampant impunity for unlawful killings in the Occupied Palestinian Territories.”

Israeli Jews are not of that opinion. Haaretz reports calls by Israeli lawmakers for a pardon of the killer. Defense Minister Avigdor Liberman termed the verdict harsh, but sought to defuse angry protest. Culture Minister Miri Regev said she’d lead a campaign for his pardon. The BBC quoted two ordinary Israelis today saying that Azaria is a “hero.” One said he was protecting women and children in Hebron, and it is a “scandal” that he is not being supported.

Both the Times and Washington Post stories ignored the human rights groups saying how exceptional this case is and portray the killing an aberration inside the occupation. Ruth Eglash in the Post does not quote any Palestinian on the case. Isabel Kershner in the Times only quoted one at the very end of her story. After the impact of the decision on Israeli Jews has been analyzed every which way, as an afterthought the New York Times gives the Palestinians a single comment.

Ahmad Tibi, an Arab member of the Israeli Parliament, said in a Twitter post that dozens of soldiers and commanders who killed Palestinians should have been convicted. “Fifty years of occupation add up to much more than one Azaria,” Mr. Tibi wrote.

Remember that the victim in this case was a Palestinian in occupied territory. Imagine covering a lynching in the South and leaving the comments of blacks to the very end. This was always a story about occupied Palestine. Ma’an news has a crucial angle the Times and Post ignores:

Emad Abu Shamsiyya, a Palestinian activist who filmed the point-blankshooting of Abd al-Fatah al-Sharif by an Israeli soldier in Hebron last March said he “feared for his life” after the Israeli soldier was found guilty of manslaughter for the killing Wednesday.

Eglash in the Washington Post covered the widespread support for Azaria in the second paragraph of her story:

As the verdict was read, violence broke out among several hundred right-wing protesters who had gathered outside the military court in Tel Aviv to show support for the 20-year-old soldier, Sgt. Elor Azaria.

Kershner downplayed and rationalized the support for Azaria.

Many in Israel, a country where military service is a part of national identity, called for backing up young soldiers sent on dangerous missions. They said that Sergeant Azaria had been in an impossible situation and that the deck had been stacked against him, since an acquittal would have put his commanders in a bad light. . .

Appealing to public sentiment in a country blighted by wars and terrorism, and where most Jewish 18-year-olds are conscripted for up to 32 months of military service, his supporters portrayed him as “everybody’s child.”

Kershner must know that to be true; at least one of her sons has served in the Israeli Defense Forces.

Defense Minister Avigdor Liberman tried to tamp down the outrage over the verdict:

“This is a harsh verdict,” Liberman said, ”The first thing I ask is for everyone — those who like the judgment more, and those like me who like the verdict much less — we are all committed to respect the legal decision and to exercise restraint despite the harsh verdict”.

Liberman promised that the defense apparatus would help the soldier and his family in every way possible. “I call on public figures to stop attacking the defense system, the army, and the Chief of Staff. The calls that I heard in last half hour are fundamentally wrong. The Chief of Staff is the commander of the army, day and night, 24 hours a day, seven days a week”.

Arutz Sheva reports that Culture Minister Miri Regev says the verdict tells people that soldiers are “alone in the field.”

“I intend to act for granting amnesty to the soldier Elor Azariya. This is no way to treat one of our soldiers. It was a trial that never should have started. An incident that took place in combat where a terrorist was killed by a soldier should not be judged as a criminal act. If Elor Azariya violated procedures, he should have been called before a disciplinary hearing with the commander of the brigade.

“Unfortunately, the main court in this case was a field court, where commentators and politicians judged Elor before the military investigation of the incident ended. This conduct transmits the message to soldiers who enlist in the army: you are alone in the field. The soldiers have complex challenges in carrying out their operations. A move was committed here that abandons a soldier. I want to strengthen Elor and his family who are experiencing hard times.”

“Today’s conviction of a member of the Israeli forces is a rare occurrence in a country with a long record of using excessive and unwarranted force, and where soldiers who may have committed crimes under international law very seldom face prosecution,” said Philip Luther, Research and Advocacy Director for the Middle East and North Africa at Amnesty International.

Mainstream American readers are sure to be surprised by the viciousness on the part of Israeli society in its fond support of a killer who shot a man lying wounded on the ground, after he had allegedly attacked an occupying soldier with a knife. The mainstream has long kept this face of Israel hidden from Americans. Maybe we will finally see the unvarnished views of rightwing Israelis?

Yakov Hirsch predicted this verdict and the split in Israeli political culture long ago.