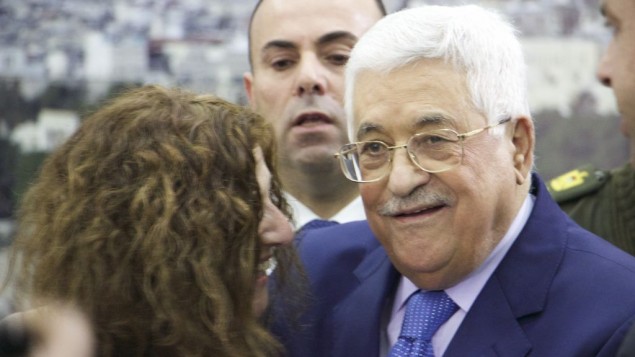 Israelis Meet With Abbas Ahead Of Paris Peace Conference

Above photo: Palestinian Authority President poses for a photograph with an Israeli peace activist at the PA headquarters in Ramallah on January 5, 2017. (Dov Lieber/Times of Israel)

Uri Avnery and Ran Cohen: Netanyahu should go to Paris – peace is a hope, not  a threat

“We will not take the path of violence and terror, we will continue to struggle by political means” – President Abbas

Ramallah, West Bank, Palestine – Robi Damelin, an Israeli bereaved mother whose son – an IDF officer – was killed by a Palestinian sniper during the Second Intifada, gave to the Palestinian President Mahmoud Abbas (Abu Mazen) a watch bearing the flags of Israel and Palestine, and the word “Peace” in Hebrew, Arabic and English. That was at the climax of a meeting which President Abbas held with more than a hundred Israeli activists who came to the Presidential Compound in Ramallah.

Robi Damelin and the other Israeli activists expressed appreciation for what Abbas said to them: “I do not believe in violence and terror. Despite all the difficulties that we face under occupation, we will not turn to other, improper means. We oppose such means and struggle against them. We are against violence and terror, anywhere in the world.” The activists noted the importance of bringing these words to the attention of the Israeli public, which is exposed to an enormous stream of hate propaganda against the Palestinians.

The Israeli activists had arrived in Ramallah on two buses, as well as in private cars and Palestinian taxis. The event was preceded by negotiations with the military authorities, which demanded to get in advance the list of participants.

Present at the meeting was the French Consul in East Jerusalem, who is in charge of France’s relations with the Palestinians, who told the assembled Palestinians and Israelis of President Francois Hollande’s initiative to hold  a  Middle East Peace Conference in Paris next week. President Abbas said he was determined to go the Paris conference: “This conference is an example of the political and diplomatic approach we’re taking, towards peace and ending the occupation.”

Former Knesset member Uri Avnery said: “I thank the President Hollande for his initiative. I am glad that President Abbas is going to the conference in Paris, and I’m also glad that foreign ministers from all around the world will attend it. I am very sorry that my own country’s Prime Minister – who represents me even if I did not choose it – decided to boycott the this conference, to launch an all-out campaign against it and regard it as ‘a threat’ instead of a hope. I have to say it clearly: the world cannot make peace on our behalf. Peace can be achieved only by Israelis and Palestinians, Palestinians and Israelis, meeting and sitting together as we are sitting here – and there should ever more such meetings. But the world can certainly help us achieve peace, help remove the obstacles. The conference which is due to take place in Paris is an example of such assistance, and so is the UN resolution against settlements. It is definitely not an ‘anti-Israel’ resolution – except in the eyes of those who think that the settlements are Israel and Israel is the settlements. That is not my Israel, nor is it the Israel of most Israeli citizens”.

One of the Israeli activists called upon President Abbas sent a telegram to Prime Minister Netanyahu and offer to come immediately to negotiate with him and sit together non-stop until an agreement is achieved: “If you do it, Netanyahu will be left with his mouth open. He will not know what to say.” President Abbas reiterated that he had on several occasions announced his willingness to negotiate with the Government of Israel, provided that settlement construction is halted. “Settlement construction and expansion while negotiations go on would be an attempt to unilaterally decide the future of the territory whose future is supposed to be determined by agreement. How can anyone negotiate seriously in that way?”

Former housing minister Ran Cohen gave President Abbas copy of his autobiography, ‘Sa‘id ‘. “I was born in Baghdad, Sa‘id was my name as a child and Arabic was my mother tongue” said Cohen, who started his speech in that language. “As a child I had to undertake a far from easy journey – from Baghdad to Basra in southern Iraq, from there to Tehran and finally to Israel. I remember the feeling of joy and jubilation which I felt as a child who came to Israel after that difficult journey. The words ‘To be a Free People in Our Country’  were for me more than rhetoric – they were the reality of life. That is the joy and jubilation that I wish and hope for the Palestinian children in Ramallah and in all the Occupied Territories – to be free, to enjoy the independence and liberation which all people and all nations deserve, to be free in their country, in Free Palestine which would live in peace with Israel. ”

Cohen strongly condemned the decision of Defence Minister Lieberman to ban  members of the Palestinian Committee for Interaction with the Israeli Society from entering Israel. Ziad Darwish, one of the main activists of that committee, said that despite Lieberman’s ban, Palestinians can find and will continue to find ways to maintain good and strong contacts with peace-seeking Israelis. “This year will mark fifty years of the occupation rule against which we are struggling. We plan to organize a variety of protest events to mark this date, to demand an end to the occupation with no further delay. We hope and expect to act on this matter in close cooperation with the Israeli peace-seekers whom we highly regard. May we all, Palestinians and Israelis, celebrate together the end of the occupation and the coming of peace.”

Eli Safran  -organizer of the Israeli peace delegation to Ramallah

Ibrahim Bushnak – Palestinian committee for interaction with the Israeli society