Issawiya — The East Jerusalem Neighborhood At The Forefront Of Occupation

Above Photo: Israeli forces stand guard as a bulldozer demolishes a Palestinian building in Issawiya which does not have the necessary Israeli permits, December 17, 2019. (Photo: Muhammed Qarout Idkaidek/ APA Images)

It’s been six months of unrest in Issawiya. Excessive police brutality and indiscriminate daily raids by Israeli forces with no justification have left residents of the East Jerusalem district exhausted – and there is no end in sight.

“What’s been happening is very violent police raids, by very violent policemen who lack any values,” Ahmad Adam Masri, an Issawiya local described of the campaign that residents say is the most brutal and prolonged in living memory. “What goes on in the alleys of Issawiya is oppression, is suffering, is injustice and we’ve been tolerating it for six months.”

Since June, dozens of heavily armed soldiers from the border and riot police units have entered Issawiya almost every evening, staking out positions around the district under the pretext of security.

According to B’Tselem spokesperson Amit Gilutz, the harassment varies with intensity. Israeli forces have been “detaining hundreds of residents, including minors, issuing traffic tickets for spurious infractions, serving of house demolition orders, and acts of violence,” Gilutz told Mondoweiss in a statement. 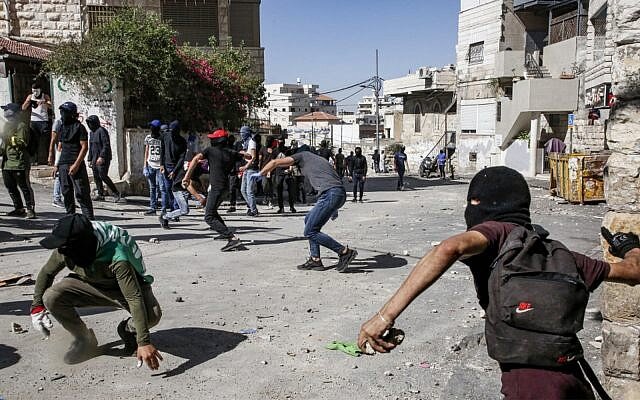 Palestinians throw stones during clashes with Israeli police in Jerusalem’s neighborhood of Issawiya on June 28, 2019, a day after a Palestinian was shot and killed by police during a protest in the same neighborhood. (Hazem Bader/AFP)

The 18,000 residents must grit their teeth and endure the harassment, or face repercussions. At the height of clashes between June and August, nearly 350 arrests were made, resulting in just five indictments.

Locals suggest the number of arrests is as high as 600, with child arrests in Issawiya making up 41 per cent of all child detentions recorded in East Jerusalem before September this year.

Conservative figures of 137 injuries have been recorded, compared to four Israeli soldiers.

On June 27 clashes piqued when 21-year-old Palestinian Mohammad ‘Abeid was fatally shot in the chest at close range with live ammunition after hurling fireworks at police officers.

The UN concluded that ‘Abeid did not pose a threat of death or serious injury to Israeli forces and raises “concerns about excessive use of force in violation of the right to life”.

This violent campaign does not take place in a vacuum, Gilutz explained, stating the ultimate goal is to make life unbearable for Palestinians in Issawiya. “It is an inseparable part of Israeli policy throughout East Jerusalem, which treats the Palestinian residents of the city as unwelcome guests in their own homes, and seeks to perpetuate a demographic majority for Jews.” 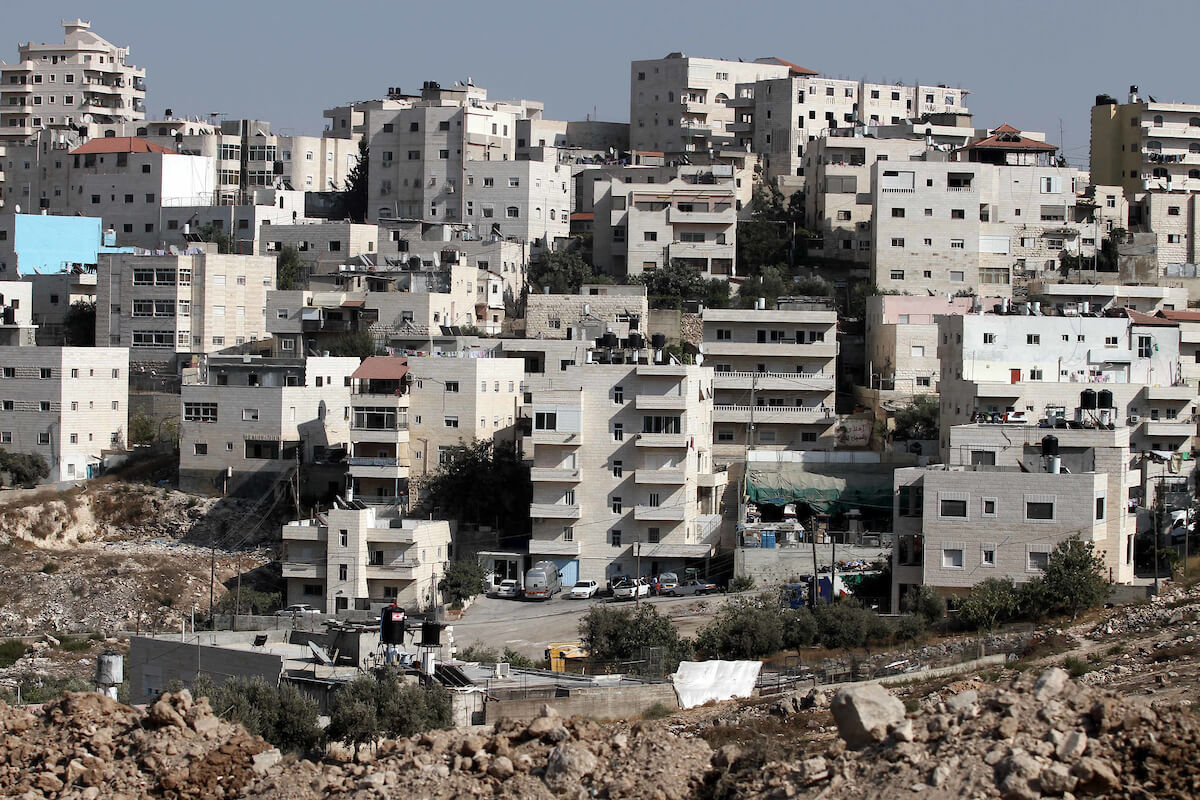 The Israeli settlement of French Hill in East Jerusalem on Sept. 09, 2013 as Israeli bulldozers began constructing a dividing zone between Issawiya and the settlement. (Photo: Saeed Qaq/ APA Images)

Located just a few kilometres northeast of Jerusalems’ Old City, Issawiya lies sandwiched between French hill and Tsameret HaBira settlements, the Hebrew University campus, and Highway 1, a road which connects the settlers in the occupied West Bank to Jerusalem and Tel Aviv. Due to this, Issawiya’s historic land borders have shrunk dramatically since 1967 from 12,500 dunams to just 2,000 today.

Israel captured East Jerusalem in 1967, a move deemed by a vast majority of the international community as illegal under international law. The city remains a crux of the Israel-Palestine conflict, with each side claiming it for their future capital.

Masri has felt firsthand the brunt of Israel’s discriminatory policies towards East Jerusalemites, explaining how the police “violently attacked” him after they demanded he closes his phone shop, to which he refused. “This is the reason why a week later they came back to make amends and punish me for it… they’re violent for the sake of being violent.”

“[These] brutality violent riot and border policemen cannot accept the fact that a resident of Issawiya is demanding dignity and standing their ground, demanding the right to maintain their property.”

“What they’re trying to do is put the residents of Issawiya to bed and, when I say ‘to bed’, I think you know what I mean,” Masri said. “I apologise for being vulgar and implying that they are going to rape us, but they taught us vulgarism, they taught us brutality.”

Body camera footage emerged in October of border police officers stationed in Issawiya speaking amongst themselves, acknowledging the operation is used to provoke the district “for nothing”.  One officer was recorded saying, “our policy [here] is screwed up from the outset,” to which a colleague replies in the affirmative, that the goal is to “cause more problems”.

Another resident, Mohammad Abu Hommos, who has been assaulted seven times, feels the neighbourhood has turned into a ghetto. “Issawiya is now like a test lab,” he explained. “They test house arrests, child interrogations, they use us as a training field for what police should do in their work.”

Abu Hommos believes the clashes began as a result of a smear campaign by Israeli police accusing Issawiya residents of attacking cars on the highway to the Ma’ale Adumim settlement and the nearby Hadassah hospital with stones and Molotov cocktails.

Activists from left-wing Jewish-Israeli groups Free Jerusalem, All That’s Left, and Ir Amim have been sending teams each night to document the harassment. They also hope their presence reduces the level of police violence.

One of the activists working with Ir Amim, Aviv Tatarsky, told Mondoweiss that while police brutality is nothing new in East Jerusalem, the escalation in Issawiya is unprecedented compared to other districts.

Tatarsky speculated the start of the violence correlated with the new Jerusalem District Chief Doron Yedid coming into office in February. “The new police chief that decided he will send his soldiers day after day, night after night, to disrupt life in the neighborhood.”

“There is no good answer to why this is happening,” he continued. “And you can see the psychological damage this is having, especially on children.” Israeli authorities have apprehended children as young as five years old over allegations of their stone-throwing, with parents being summoned over their actions.

“I know for myself if such police behaviour would be in my street, then me and my neighbours we would have lost it a long time ago,” Tatarsky added.

In an attempt to draw attention to the raids, Israeli activists have staged several protests in front of Jerusalem Mayor Moshe Leon’s home in West Jerusalem, demanding his intervention to end the police violence.

“He did not only not intervene but wasn’t even willing for people to protest in front of his home as if it has nothing to do with him. So he sent the police to get rid of us,” which Tartarsky said led to the detention of himself and four other activists.

“You know Israel calls itself a democracy,” Tatarsky derided. “But any Palestinian that would hear me saying these things would either smile bitterly or just laugh because they never have this freedom anyway. So if you now stand up in solidarity with Palestinians, you also don’t get this freedom.”